Following a fire at Baxter's Knob Reserve in Porirua this morning, telcos have gone public to say they are working with police after a series of threats and arson attempts against cellphone towers.

A telco industry insider contacted the Herald this morning about what he described as an apparent arson attack on the Baxter's Knob transmission tower, which is operated by Kordia and includes both TV transmission gear and 2degrees' kit.

Asked if the incident was being treated as arson, a police spokeswoman told the Herald, "Fire and Emergency were called for a fire at a cell tower at Baxters Knob at around 4.30am. Initial indications are that the fire was caused by an electrical fault. However, further inquiries are ongoing."

But although the Baxter's Knob blaze seems like it could have accidental, telcos are still furious about what they say is an ongoing series of threats and attacks on cell sites - and they hint that anti-5G protesters could be behind the damage.

The Baxter's Knob fire left thousands in the area without TV reception. A spokesman for Kordia told the Herald there had been "significant damage" to Baxter's Knob. The company could not immediately say how soon television signals would be restored.

2degrees corporate affairs chief Mat Bolland said it also left around 14,500 of his mobile customers with "compromised reception" that could take days to fix.

"We don't know what point people are trying to make at a time when mobile is more important than ever for keeping in touch," the 2degrees executive said.

Whatever happened at Baxter's Knob, Bolland says there has been a whole series of attacks, affecting all the telcos.

A Spark spokeswoman told the Herald, "Spark has been working with police about threats made to some of our cell sites.

"Since the end of March, there has been vandalism, including arson attempts at a few of our cell towers. While the damage was fairly negligible, one event caused an outage of mobile and wireless broadband services in the surrounding area. The incidents have all been reported to the police who are investigating, and we are working to monitor the sites and protect our people," she said.

"We share the broader industry's outrage over acts of vandalism against critical infrastructure during a pandemic – a time when connectivity is more important than ever."

Vodafone NZ infrastructure director Tony Baird, said, "We're consistently seeing internet and phone use increase by 20-60 per cent during level 4 lockdown, as New Zealanders use telco networks to stay connected with friends and family. Cell sites are critical infrastructure in delivering our digital services, so it's infuriating there are arson threats and attempts at cell sites, which could severely impact people's ability to get online if successful."

Spark, Vodafone and 2degrees all declined to describe the attacks, threats or location of the cell sites involved. One insider said there was a fear that sharing such details would spark copycat attacks.

And while none of the telcos would go on the record blaming anti-5G protesters, Geoff Thorn, head of the Telecommunications Forum (TCF), which represents the major telcos, told the Herald, "We know that damage to mobile networks in other countries has been linked to groups opposed to 5G. " 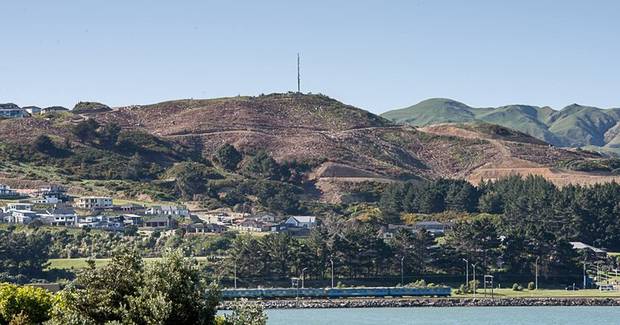 The Baxter's Knob tower from a distance. Photo / Porirua City

"We condemn all acts of vandalism but it's even more frustrating to deal with an attack on critical national infrastructure during a time of national emergency. If cell towers are damaged and can't function, then the people they serve will not only lose internet access, there is the real chance that 111 calls will be unable to get through," Thorn said.

Although telcos have condemned vandalism in the time of Covid-19, it's possible that the pandemic has caused an uptick in anti-5G sentiment social media. Tech commentator Paul Brislen - a frequent critic of anti-5G misinformation pushed by some groups on Facebook - has recently noted chatter among some groups that blames the Covid-19 outbreak on 5G (although Facebook has not stamped out all such comments, it has moved to put World Health Organisation information links at the top of all coronavirus-related search results).

Despite 2degrees not even having any plans for a 5G network, a recent comment left on its Facebook page - one of many in a similar vein - reads, "We are all getting f**ked over by the 5g towers you are installing outside primary schools. To all the electricians working for 2 degrees, you are all smart enough to know they are not good so don't bloody install them. Quit. Go on strike. Do what you have to do. Screw you 2degrees and all those who are installing these killing mahines [sic]."

Asked at the daily Covid-19 briefing yesterday if she had a message for those on social media who said 5G caused the outbreak, Prime Minister Jacinda Ardern replied, "Just simply that that is not true ... I almost hesitate to even speak to it on this platform. It is just not true."

Director-General of Health Ashley Bloomfield confined himself to an eyeroll.

Late last year, the Prime Minister's Chief Science Adviser, Prof Juliet Gerrard, said her office had reviewed multiple international studies and found, "the currently available scientific evidence makes it extremely unlikely that there will be any adverse effects on human or environmental health."

A comprehensive "What is 5G?" explainer published on the Chief Science Adviser's website notes the difference between harmful ionising radiation, such as that produced by X-Rays, which has enough energy to harm cells with prolonged exposure, and non-ionising radiation (such as the radio frequencies used for 5G transmission, 5G phones and wi-fi) that do not have enough energy to damage cells.

Those concerned about 5G often cite that radiofrequency radiation was classified as a "possible human carcinogen" by the International Agency for Research on Cancer (an arm of the United Nations' World Health Organisation ) in 2011.

The Chief Science Adviser's 5G Q&A puts this into context, noting the "possible" category - unlike the IARC's "probable" list - includes phenomena where a link to cancer cannot be completely ruled out and "catches many commonly encountered things, such as pickles and dry cleaning, so represents a low-risk rating. To put this in perspective, even the classification above this, 'probable human carcinogens,' includes widely encountered activities including drinking very hot drinks and working night shifts.

Vodafone told the Herald earlier today that it had suspended work on its 5G rollout, in keeping with the Government's level 4 lockdown guidelines.

Separately, MBIE put an indefinite hold on an auction of 5G spectrum, which had been due to take place this month - and which Spark was relying on to hit its July 1 5G mobile service launch date.