If you're currently dissatisfied with your home internet speeds, I've discussed before, at length, the importance of identifying any potential choke-points.

Presumably, you've started with the obvious ones; like your actual plan.

Up to 100Mbps may have seemed like a lot when you first changed over to fibre but let's really think about how your typical household usage may have evolved in the last year or so...

If you've got someone streaming, someone gaming, someone posting and of course most importantly, someone on a video chat for work - that's a lot of someones fighting for their share of that 100Mbps.

Which may not even be 100Mbps of course. Read the fine print. Depending on exactly how your plan is set up, your speeds might be throttled down at peak times or after you've used a certain amount of data.

Still feeling good about that up to 100Mbps?

Luckily, even here in little old New Zealand, Hyperfibre is now quite widely available, with some ISP's like Orcon even offering speeds of 8000Mbps. Insane? Yes. Cool though? Very.

But it's what happens once the internet gets into your house that can really make all the difference.

We've talked routers till I'm blue in the face. Definitely not all created equal and research is essential to ensure your ISP isn't just fobbing you off with a free one that could cut you off at the knees, performance-wise.

I've also tried a lot of different repeaters and extenders over the years, to ensure great Wi-Fi coverage in every corner of my home but here again, those Wi-Fi access points are only as useful as the signal they're being fed.

Even hardwired ethernet cabling throughout your home may not be the ultimate answer - depending on how many devices are connecting at once.

And that's where the final piece of the puzzle fits in. The switch. 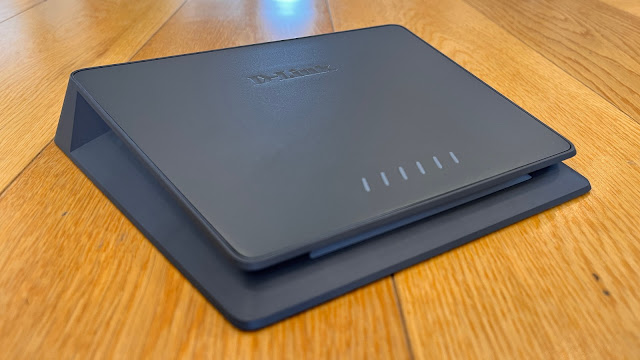 You don't have to be a gamer to enjoy the benefits of installing a device like the D-Link DMS-106XT. Although it definitely looks like something a gamer would choose to compliment their mechanical keyboard and RGB mouse.

The DMS-106XT is one of the most battle-ready feeling devices I've encountered from the D-Link stable, extremely solid and exquisitely finished off in its unusual metal housing. It's sci-fi-looking enough to satisfy nerdy gadget-heads like me, without any weird appendages to make it unattractive to people with actual taste - like spouses and mothers. It's compact too - imperative given it might well end up being tucked away in some junction box somewhere.

If you haven't used a switch before you may not have realised they exist. They're kind of like the multiboards we plug all our appliances into in the kitchen or behind the TV cabinet - except for the internet. If you've ever wanted to hardwire your smart TV, your set-top box and your gaming console but only had one ethernet port to plug them all into, a switch can make that possible.

If you work in a large office, you may have seen the industrial versions of these devices - more likely managed switches with dozens of ports to deal with the octopus arms of ethernet cabling from all over the building.

Conversely, the DMS-106XT is unmanaged, meaning there's basically no setup required whatsoever. Simply plug in the power adapter, a line to your router and then up to five other devices and you should be good to go. 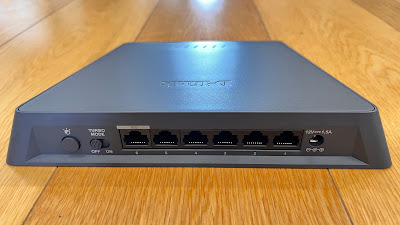 The exciting thing about this particular switch is its capacity; five 2.5Gbps ports and an ultra-fast 10Gbps connection, the latter most useful for Home Media Servers or other NAS (Network-Attached Storage) devices where a fast exchange of big data files is essential. This is a massive (and I mean massive) improvement over what you'll see from other, cheaper switches with basic gigabit capacity. These entry-level switches tend to cause the very choke-point I warned against at the top of the article.

I have great high-speed fibre coming into my house but up until now I was running several devices, including my TV, through the primary hub for my mesh Wi-Fi network. This was simply because that mesh router has extra ethernet ports built into it. But by the time everyone else was connected to the Wi-Fi - and that includes smart speakers and security cameras - dropouts and long load times were fairly common as my Wi-Fi router struggled to prioritise the workload.

Those issues have all gone away since installing the DMS-106XT. Now my TV, set-top box and even my smart lights don't have to go anywhere near my Wi-Fi network to connect to the internet and meanwhile, I've noticed a significant bump in speeds on devices that are connected via Wi-Fi. 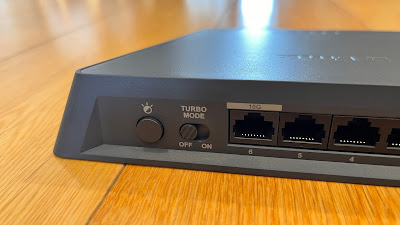 This is aided even further by activating Turbo Mode - with a flick of the switch, connected devices are given priority depending on which port they're connected to. According to D-Link this can result in an extra 40 percent speed boost.

I now definitely have all the speed I need, all the time. But perhaps even more importantly is the increased reliability of my whole network. No more cameras disconnecting themselves or smart speakers losing touch with streaming services. 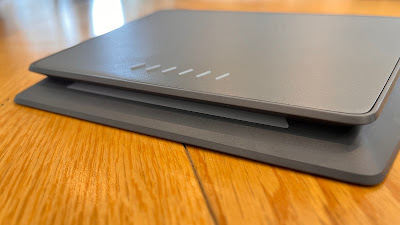 I can do without the LED indicators showing which ports are in use or the RGB light strip that pulses like a rainbow when Turbo Mode is activated but thankfully, those lights can all be turned off with the push of a button. I get that some people want all the pretty lights... I'm just not those people.

$NZ449.99 is certainly a hefty price-tag but I can assure you this is a durable, attractive, well made device that delivers on its promise of dramatic speed increases to all connected devices. For anyone who has ever shouted in frustration at their clogged-up home network, this is an effective and dead simple way to clear it out.