If you're still struggling with your home WiFi setup, there are any number of steps you can take to remedy the situation.

Yes, there are extenders or mesh-router systems you can try. These will certainly help with any coverage issues you might be dealing with but if you're experiencing slow speeds, dropouts, buffering, this isn't necessarily because of a weak signal.

If you have a lot of IoT devices, smart speakers, WiFi cameras or just a lot of people in the house all trying to be online at once, things are probably getting pretty crowded at your router.

It's like expecting to get a more powerful flow from your hose if you only have the tap half-on.

WiFi-6 is one way to get things moving... 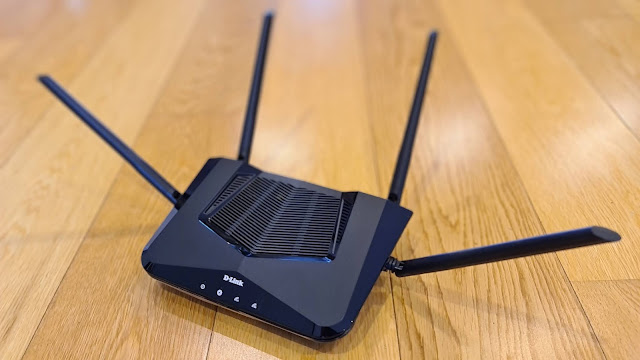 As the ultimate example of, "Looks can be deceiving," the D-Link DIR-X1560 is a pretty inconspicuous little thing - and I do mean little. Apart from the four external antennae, this router is one of the most compact I've come across in the D-Link stable, making it easy to tuck away somewhere subtle. Like other recent D-Link devices, there's also the option to turn off the status LED's once you've got it all set up, really helping make the DIR-X1560 as invisible as possible.

In terms of installation, this was undoubtedly the most hassle-free setup I've ever experienced on any router. Well, almost. I tried to do it with the D-Link WiFi app initially but when I couldn't get it to work first time I simply connected my phone to the DIR-X1560 by scanning the QR code on the base. At that point I was able to open the browser-based setup window which includes an easy-to-follow, step-by-step connection wizard. Settings like WiFi passwords were saved quickly and efficiently - I was up and running in about ninety seconds - I think that's a record for any router I've used so far. Or maybe I'm just getting better at it. 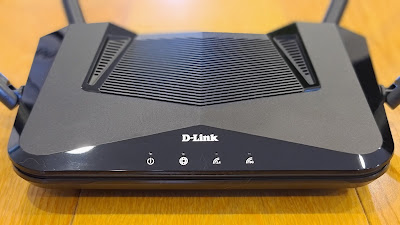 Despite its minimal footprint, this is an exciting piece of connectivity because it's one of the first WiFi-6 routers on the market. This makes it ready to handle the increasing number of smart devices you're no doubt bringing into the house, many of which require stable, fast, 24/7 WiFi connectivity. Security sensors and cameras aren't much use if they can't react instantly when triggered. Smart speakers aren't very smart unless they're always waiting to respond to your next command. WiFi-6 means a significant leap in capacity and bandwidth so it can deal with many devices simultaneously.

To facilitate this further, D-Link routers have been using MU-MIMO technology for some time now, which intelligently allocates bandwidth to multiple devices so everybody gets the most powerful connection possible. The DIR-X1560 now reduces congestion even further by using a new standard called Orthogonal Frequency Division Multiple Access (thankfully abbreviated to OFDMA). Somehow this allows the signals from many devices to be transmitted all at once instead of queuing up, meaning a quadruple boost in bandwidth capacity - music to the ears of anyone with an online gamer in the house. Now your video streaming won't be left to buffer at the expense of their First-Person-Shooter.

There are a host of other techy tricks I could get into but the upshot is, this router is all about allocating enough internet access for every gadget that needs it. Interestingly, in terms of actual coverage, I've found the signal is not necessarily more powerful than other similar routers I've used in the past but I've discovered even when I connect at the weaker edges of its coverage area, the linked device still seems to perform reliably, presumably due to all these new advances built in.

The DIR-X1560 is also part of D-Link's EXO range, which means you can create a mesh WiFi network with compatible EXO extenders. A small caveat here though; when I tried doing this with the DAP-1820 extender, it worked well with most of my devices but I had major issues with my Alexa enabled multi-room speaker system. I don't know for sure, but I think this may be due to the fact the DAP-1820 is not WiFi-6 enabled and the speakers seemed to think they were split between two different networks even though the SSID was the same. I'd like to try it again with D-Link's new WiFi-6 extender, the DAP-X1870, but that doesn't seem to be available here yet. The good news is, when I unplugged my extender, there was enough coverage from the DIR-X1560 to connect all my speakers anyway and everything started working much better.

And that seems to be the beauty of the DIR-X1560; as long as you can connect to it, even a couple of rooms away, the result is still pretty good. 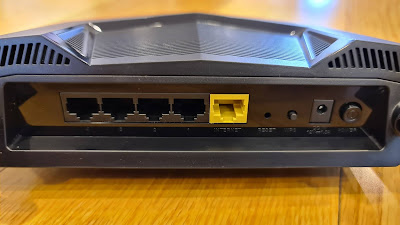 My only real beef with this device is the lack of a USB port. This means I can't set up a media server on my network like I'm used to - there are still four 10/100/1000Mbps gigabit ethernet ports but no USB which is a bit frustrating. Maybe I'm asking too much from such a reasonably priced router - after all, it still offers other premium features like a customisable firewall and QoS (Quality of Service) that let's you manually prioritise connected devices.

If connecting a USB drive for network storage isn't a priority for you, then the DIR-X1560 offers (and delivers) a lot of future-proofed new features for the money, in a small package.