Nanoleaf is such a weird brand. They've created an entire ecosystem of lighting devices that serve almost no useful purpose whatsoever. Yes, they're smart. Yes, they're pretty. But just remind me... What are they actually for exactly?...

Oh yes, that's right; fun. It's just a bit of fun. I remember fun. From before. Yes, maybe it's a good time to try and have some fun again. 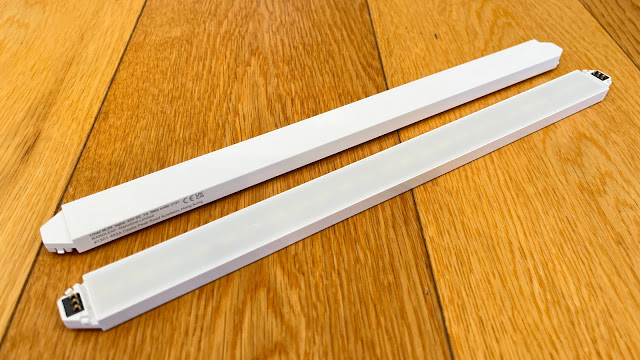 Obviously I'm being somewhat facetious. I've used plenty of Nanoleaf products and I think they're pretty great. And as for usefulness, the recent smart-bulb and lighting-strip options are definitely more versatile than whacking a bunch of LED hexagons up on your wall.

But now we have something that lands somewhere in between the two. Nanoleaf Lines are super-slim, 28cm long lighting bars, similar to those some people use to create accent lighting behind TV's and computer monitors.

In fact, that's exactly what you can do with Lines if you want. 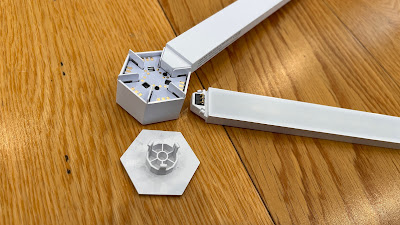 Unlike other Nanoleafs of the past, Lines are designed to shine against the wall, not directly out towards the viewer, creating a more ambient effect. This is achieved using the unique, hexagonal Mounting Connectors. Not only do these securely join up to six Lines together by simply snapping them into place, they also allow you to space the Lines away from the wall to let the light diffuse in all directions. 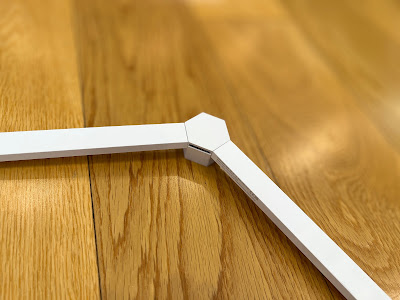 The Mounting Connectors come with paint/wallpaper safe adhesive tape on the back and a few extra strips in the box. You can even attach the lines to your ceiling, although you might want to go with screws rather than tape for this option, just to be safe. (Screws aren't included, by the way, although the Mounting Connectors will easily accommodate them.)

As with previous Shapes, you can use the Nanoleaf app to try out your preferred configuration virtually, before doing anything as drastic as drilling into your wall or ceiling. A word of warning; if you've never used this kind of "removable" tape before, it's not always as removable as you might like.

Last year around this time I used some Nanoleaf Trtiangles to create an animated Christmas tree decoration for my entranceway. It got rave reviews but when I took it down after the holidays, I did end up with some minor bulges in the wallpaper where I'd stuck it on. Admittedly, the Mounting Connectors on the Lines are way smaller, so are probably far less likely to cause any significant damage.

This year, I really felt the pressure to come up with another cool design for the festive season. So I racked my brain and decided to make... another Christmas tree. 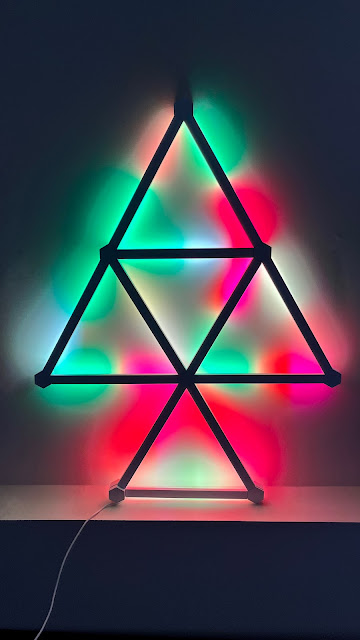 I know. How do I come up with these things?

As usual, with most RGB LED devices, there's a choice of several million colour combinations. These can be "painted" on each Line individually if you choose - even different colours on each half of each Line. There are also several animated Dynamic Lighting Effects and the ability to respond to music via the built-in Rhythm Music Visualiser. If this all sounds a bit overwhelming, there are a host of pre-programmed templates waiting in the Nanoleaf app at your disposal.

Although, as an experiment, this is the first time I've set up a Nanoleaf gadget from scratch using Apple's Home app instead. As a HomeKit device, this was so easy it was almost laughable, compared to some of the connection and update issues I've had over the years.

Not only can you use Siri to control your Lines, they'll respond to most other smart-home systems too, including Amazon Alexa and Google Assistant. It also acts as a Thread Border Device - meaning it strengthens the reach of your network of any other Thread devices you have in your home. I certainly haven't had any connection issues at all and it responds to my instructions instantly. 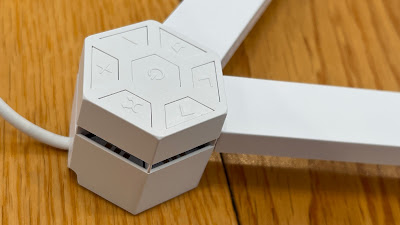 There's a physical controller built into the initial Mounting Connector too, giving you the option to power on and off and cycle through favourite scenes and modes.

Unfortunately, the more conventional, light-bar-like Screen Mirror function I mentioned earlier only works via the desktop app - great for accentuating what's happening on your gaming monitor but very cumbersome to get it going on your telly. This is because it will only work if you're streaming video content from your computer to your TV. Unless that's how you normally watch Squid Game, I wouldn't recommend this Nanoleaf product for television lighting.

Another option that would be good is accentuating static artworks - the Lines are so slim you could easily tuck them in behind the frame of your favourite picture or painting then colour them to match.

One issue I have with these new devices is how they look when they're not switched on. Unless you've mounted them on a white wall or ceiling, they stick out like... well... like long strips of white plastic. At least you can argue the squares, hexagons and triangles we've seen from Nanoleaf previously kind of look like some kind of piece of modern art, even when not illuminated. The Lines? Not so much. Watch this white space though... both black and pink snap-on skins are on the way with more designs being promised.

It must be said, the power cable is limiting too. Not because of the length - it's actually generously long - but just because it's there at all. I suppose technically, you could drill into your wall or ceiling to conceal it but there's no getting around the fact you have to plug your work of art in to light it up.

I also have to mention the price. Starting from NZ$349.99, Nanoleaf Lines are a pretty expensive toy. In saying that, they are extremely well designed, they work exactly as promised and the new mounting system looks like it might be the most reusable yet. While you can't connect them directly to other Nanoleaf products like Triangles and Hexagons, as an evolution of Nanoleaf technology they definitely deliver.

Click here for more information and pricing on Nanoleaf Lines.