Of all the earbuds I've ever tried - and believe me, I've tried many - I've never had a set of AirPods.

Oh, I've done EarPods - back in the days before everything went wireless - but given I've been on a bit of an Apple hiatus (until this year) I hadn't really given AirPods a go.

That was due in no small part to me not being a fan of the original design. Other earbuds at the time were trying hard to be just that, buds... small, round and as inconspicuous as possible. Meanwhile, Apple's version looked like they'd literally just cut the cords off the iconic EarPods, leaving those rather obvious white stems behind.

"How ridiculous!" I said. "Who in their right mind would wear something like that?"

Of course, I'd underestimated Apple's ability to create tech fashion out of nothing. Again. Turns out, half the world's population were not only perfectly happy to walk around with white sticks hanging out of their ears, the people without them were jealous of the people with them.

Furthermore, other manufacturers even started producing earbuds in a similar form-factor.

Furtherer-more, I eventually tried some of these and liked them.

Just goes to show; I'm wrong about most things. 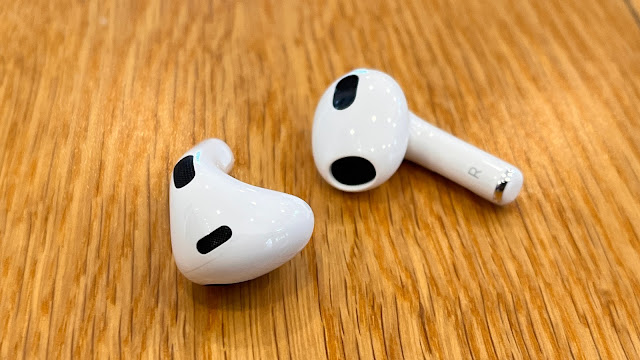 This year marks the launch of the third generation of Apple's AirPods, now so jam-packed with bells and whistles you've really got to work your way through the list to see what the AirPods Pro do that these new "vanilla" ones don't.

In fact, if you do compare both devices side by side, you'll actually discover the 3rd-gen AirPods even out-perform the Pro's in a few areas - starting with battery life. 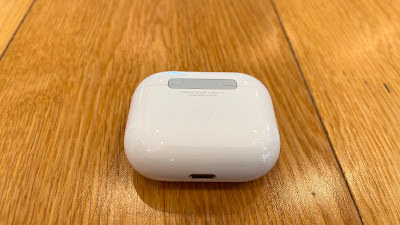 The charging case (now a MagSafe case) provides up to 30 hours of listening time and you'll get up to 6 hours from the fully charged earbuds themselves. This compares with 24 and just 4.5 hours respectively from the AirPods Pro.

Like the Pro, the new AirPods now boast an IPX4 sweat and water resistance rating (although, I know plenty of people who've been sweating all over their O.G. AirPods for years, with no issues).

Like the Pro, the touch controls are more versatile and there's also now an inward-facing microphone for better call quality.

Instead of the dual optic sensors of the AirPods 2 and Pro, the 3rd-gen AirPods now rely on a new skin-detect sensor. This means your podcast won't start playing again just because you've put your AirPod in your pocket - it actually has to be in your ear to work. 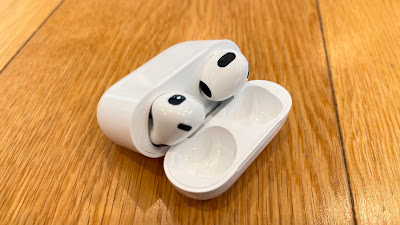 Appearance-wise, the 2021 AirPods perhaps look more like the Pro-version too. Generally smaller, with a much shorter, curvier stem. Unlike the Pro's though, AirPods 3 are still an open-fit design - no squishy, silicone ear tips for an air-tight seal. Just the same one-size-fits-all approach of the original design.

This also means no passive noise cancellation - a loose fit is a noisy fit. And as you might have already suspected, unlike the Pro's, there's no Active Noise Cancellation (ANC) either. This means if you're determined to keep outside distractions at bay, you'll have to do it by sheer volume alone.

This is definitely the new AirPods' greatest weakness. While bass response is surprisingly strong, given the lack of a tight seal, when listening to tracks with a rich, complicated timbre, a lot of the detail gets a bit mushed up. This means genre's like Jazz and Hip-Hop tend to sound excellent, while the more full-on styles like Rock and Orchestral get blurry quickly.

Allegedly, there's an adaptive EQ - sensing how things sound in your ear canal in real-time and making adjustments on the fly. If that's what's happening, it's not doing enough of it for my liking and I'd prefer the option to adjust the EQ from the settings menu on my phone.

But the 3rd-gen AirPods have one massive trick left up their sleeve (or stem); Spatial Audio with head tracking, just like the AirPods Pro.

Until now, I've mostly used spatial audio (or effects like it) for gaming and watching movies. Put simply, it's surround-sound but fixed in space, so if you turn your head, what was in front of you now sounds like it's coming from the side. When gaming, this means you can hear someone sneaking up behind you. Then, when you turn to face them, the soundscape moves accordingly.

While testing the AirPods, I've given Apple Music's Spatial Audio selection a real thrashing. And now I can't stop.

Mahler's, "Symphony No. 2 in C Minor "Resurrection": V. Langsam" starts with the quietest of choral vocals and you really feel you're in the concert hall with the orchestra, waiting for your cue from the conductor.

But it's the jazz selection that's really turned my head (pun intended). There's something intimate about the spatial mix I find utterly immersive. I close my eyes and it's as though Diana Krall is performing on a small rise, just metres in front of me.

Annoyingly, this has made it hard to listen to anything else that hasn't been recorded this way.

My other big surprise is how well the 3rd-gen AirPods stay in. As I've pointed out already, the open fit is about as far from being air-tight as you can get, yet due to their extreme lightness and the slight claw-shape to the stem, once they're in, they certainly stay in. Between that secure fit and the new IPX4 rating, they're now a lot more attractive when it comes to to exercise.

Then of course, there's the automatic switching which Apple just absolutely nails. As if by magic, the AirPods somehow know which Apple device you're using at any given time and connect accordingly. Nobody does this as well as Apple does and it's this feature alone that makes AirPods the obvious choice if you're already invested in the Apple ecosystem.

The connection is incredibly strong and reliable too - I can roam all over the house leaving my phone in one room while I'm in another and experience no dropouts at all.

As you can tell, I've ended up being more of fan of the new AirPods than I thought I would be. Battery life is great, they're comfortable yet fit securely and Spatial Audio is like aural magic. There's no question there are other earbuds that offer better technical sound quality - including Apple's own AirPods Pro, which also have the benefit of ANC.

But for all-round usability, there are a lot of great features here and not much to complain about.