There are certain songs that get you every time.

Often, it's because you're instantly transported to when you first heard that song... where you were... who you were with... what you were doing.

When I was a teenager, my brother left behind his Pye stereo when he moved out. He'd put it to pretty good use over the years but it was still in perfect nick. The veneer on the wooden speaker cabinets wrinkle-free and the turntable still turned.

I was one of those nerds who claimed vinyl was superior to CDs and I insisted on buying all my music in record form.

I honestly don't think audio quality had anything to do with it. I just liked doing the opposite of everyone else.

Either way, listening to the three disc set of Led Zeppelin's Remasters from beginning to end was revelatory. This was obviously the greatest rock band in history and I was listening to it on the best stereo in the world.

That was a good day.

Decades later and the way we consume music is probably one of the things that's changed more than anything else in that time. Oh god, I just said, "We consume music." Whatever happened to listening to it? Ick.

And smart speakers. So convenient. So clever. Not just your portal to pretty much all the music aver recorded but of course, now you can use them to operate everything else in your house too.

Oh, there's definitely still some high quality gear out there... but is there anything left to play on it?

If you're the type of person who prefers to listen to music instead of just consuming it, thankfully the new breed of streaming services has arrived. 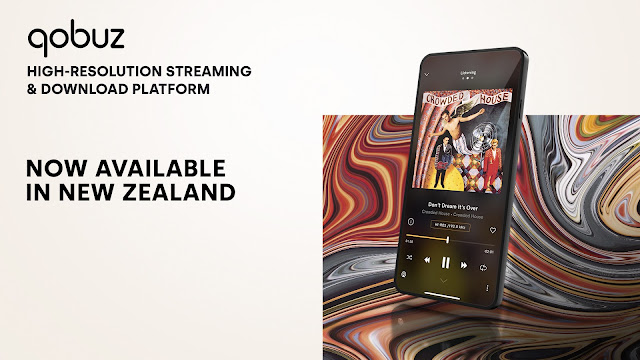 As uncomfortable as I am about using the term Audiophile... (surely nobody would be as annoying enough to describe themselves as one) apparently it's these people Qobuz (pronounced koh-buzz) was established to serve, in France in 2007. Even before then, many music-lovers - artists and fans alike - had become concerned about how great songs were being digitally squashed in order to fit into people's phones and to be streamed online without swallowing up too much data.

Yes, it's amazing to be able to load the latest top fifty onto your smartwatch to listen to on your run - but compression comes at a cost.

Qobuz claims to be "The world's best Hi-Res music streaming and download service." How you measure that exactly is up for debate but the fact is, there aren't that many competitors out there.

The other main option in New Zealand is Tidal but I haven't tried it so can't compare it. Spotify claims it's launching its own Hi-Fi service later this year. This is something I can speak about with a lot more authority as it's the default music streaming service in the glennzb household.

Tough question, actually. Because guess what? That really depends on what you're listening to it on.

While there are apps for PC, Mac, iPhone and Android, if you listen to music on any of those devices it ain't going to sound like the Royal Albert Hall. So what's the option? Half the phones these days don't even have a headphone jack, so you'll be connecting to a bluetooth device and there you go, compressing the sound again.

Meanwhile, the soundcards in PC's and laptops are notoriously unreliable, prone to interference and loose connections even when you hardwire speakers into the headphone/audio out jacks.

Luckily, there are a couple of decent options left. You can use an external DAC (Digital-to-Analogue Converter), Sonos has just joined the Qobuz party and then there's good old Chromecast.

DAC devices usually connect via USB and come in all shapes, sizes, configurations and prices, depending on how carried away you want to get. If you're running Qobuz from your computer, any connected audio outputs will appear in the bottom right-hand corner of the app, including any Google Chromecast devices on the same Wi-Fi network. Choosing your output is as easy as checking the box next to your preferred device. Using a DAC or Chromecast takes the computer's soundcard out of the equation; the external device decodes the digital signal supplied by the Qobuz stream, ensuring no loss of quality.

The Sonos situation is more fiddly as in order to use your Sonos speakers to stream Qobuz directly, you have to add Qobuz as a streaming service within the Sonos app. I assumed once the two accounts were linked, my Sonos speakers would appear alongside my Chromecast devices in the Qobuz app, like they do with Spotify. Unfortunately, this isn't the case and instead you have to navigate your way through a kind of poor-man's version of the Quobuz menus within the Sonos app itself. Told you it was fiddly. It's a shame, because my Sonos system are easily the best speakers I have for enjoying the Hi-Fi (CD quality) and Hi-Res audio Qobuz has to offer. 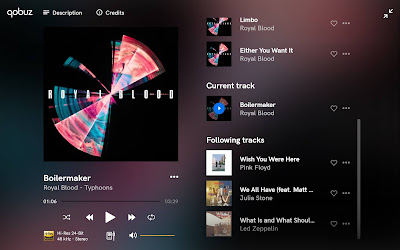 And yes, there is a noticeable difference. Although many modern audio devices claim to have built-in tech to reconstitute the sound from compressed files, this is obviously limited compared to hearing Dave Gilmour's nylon strings doing their thing on the intro to "Wish You Were Here" in its unadulterated original glory. No-one cared about audio production like Pink Floyd did. There's just something cleaner, clearer and more present about this higher-resolution listening. Julia Stone has a new album out featuring a track with Matt Berninger. When he comes out of nowhere with his booming, Leonard Cohen-like gravel tones, it's as though he's snuck up behind you. And "Boilermaker" off Royal Blood's latest release is just a banger - loud, jangly but you can hear it all. If you can listen to music at this higher quality - you probably should.

Not that the Qobuz app is perfect itself. It looks great and is easily toggled into dark mode. I've been able to find pretty much all the content I've searched for and via the Discover tab, there's a good selection of regularly updated, featured new releases, Qobuz-curated playlists and even news articles and editorials.

That's great. And if you really start to dig down into some of the menus, you'll find hidden gems like the Listening With... section - playlists supplied by famous artists. Here you'll discover Bono likes to listen to both Kendrick Lamar and Lady Gaga. There's also a decent amount of kiwi music on show - including a whole NZ Music Month playlist currently rotating on the homepage of the app.

But the glaring omission is the lack of a "station" option - automatically creating a playlist based on a single artist or a particular song.

I've found this is a great way to find new music on Spotify - if I like a certain song, I can get Spotify to play other songs like it, some of which I may never have heard before.

Qobuz is much less proactive... it's all there, you just have to know what you're looking for. Yes, you can create your own playlists but if all you ever listen to is what you've already listened to, won't that get stale after a while? Even at CD quality or higher.

What Qobuz does let you do is buy the tracks, directly through the app, iTunes style. This means you can have the file to keep and store wherever you like, not just for playing with the Qobuz app. What's more, with a Qobuz Studio Sublime subscription, you'll get significant discounts on your purchases if you are one of those old-fashioned types who thinks actually having the music is still important.

Starting at NZ$23.33 per month for an annual subscription, Qobuz isn't crazily expensive, especially if you decide to make it your sole music streaming service. Besides, as with most things, there's a free trial period anyway so you may as well give it a shot. But if you do, be prepared to learn a new way of doing things. New doesn't have to be scary by the way. And a new way of listening might make the choice very clear.

Click here for more information and pricing on Qobuz.