There's a reason Philips can get away with charging such a premium for its Hue range of smart lighting. It's the best.

If, like me, you've tried a bunch of other products you could well find yourself in the same smart home mishmash I'm embroiled in; different brands, different quality and perhaps most frustratingly; different virtual assistants.

I literally have to ask three different pretend people if I want to turn on the lights in my dining room, my bedroom and out on my deck all at the same time. How did I get myself into this mess?

At least I can usually remember which virtual assistant is in charge of which lights. Needless to say, the Domestic Manager is not impressed with the arrangement and often asks why we can't just have a switch on the wall like the old days.

The more Philips Hue products I use, the more I wish they were all I use - and the latest addition only emphasises that point. 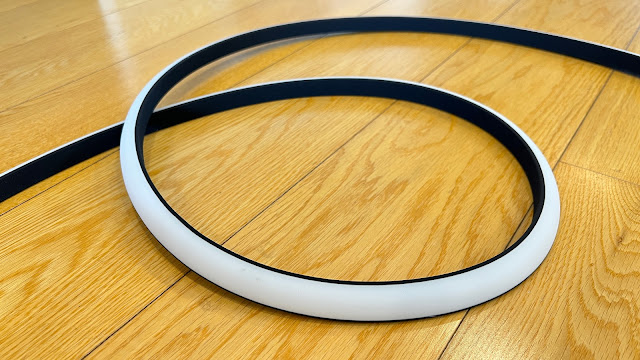 The Philips Hue Play gradient lightstrip is quite a boring-looking thing when you take it out of the box; a fairly featureless white snake with black backing. Available in 55, 65 and 75-inch models, it's designed to be mounted on the back of your TV, approximately 5-10 centimetres in from the edge. I'm using mine with a 65-inch display and sure enough, it fit perfectly. Installation is very fuss free and it's thanks to the pared-back Philips Hue design I've come to expect. 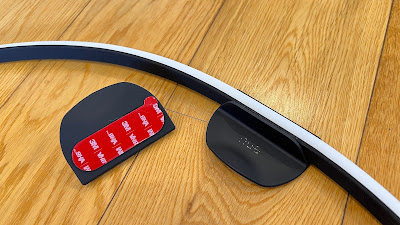 There are several plastic mounting brackets included in the box with 3M adhesive strips on the back. Once you've stuck these in place, taking care not to block any vents or speakers, it's a simple matter to push the gradient lightstrip into position, starting from the middle which is marked with a tiny triangle. 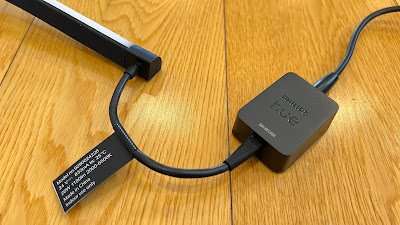 There's a small controller box that also sticks to the back of the TV. You plug the lightstrip in one end of this and the cable from the power adapter into the other. Assuming you can run that wire down the back of your TV stand, the whole setup should be totally invisible from the front.

Then it's just a matter of adding the strip to your Philips Hue profile via the app.

Oh yes, I should probably mention you're going to need some extra gear to do that. And this is the major catch when it comes to the Hue ecosystem. To make any Hue lights work you'll need a Hue Bridge. (NZ$109.00) This is a little white box that connects your lights to your Wi-Fi. Why?

Well, there is actually a solid rationale. Do you want every light in your house connecting to the same router as your phone, laptop and TV? Or would you prefer just one device that controls them all? That's the point of a bridge like this.

But wait, unfortunately there's more; for a product like the gradient lightstrip to do what it's designed to - ie; mirror the colours on your screen on the wall behind it - you need a way to tell it what's showing on that screen and where. That's where the Hue Play HDMI Sync Box comes in. (NZ$599.00)

Instead of plugging your external devices like gaming consoles, streaming sticks and set-top boxes directly into your TV, you plug them into one of the four HDMI ports on the Sync Box instead. You then plug the Sync Box into your TV (or monitor) enabling the video signal to pass through on its way to the screen.

The good news is this is actually a pretty tidy way to free up HDMI ports on your TV, you'll now only need one where you may have required up to four before.

The bad news is to make your NZ$399.95 Hue Play gradient lightstrip work, you'll need that extra $708.00-worth of gear... assuming you don't already have it.

How does this make sense? Perhaps only if you make use of other compatible products at the same time - devices like the Hue Play light bar and White and Colour smart bulbs can be added to your Sync Box setup to further enhance your off-screen lighting experience. In essence, the more Hue devices you add, the more your Sync Box justifies its expense.

But do you really need any of it?

Of course not. Why on earth would you need to shine pretty lights on the wall behind a TV that's already doing some reasonably interesting stuff? Except... you don't really need the TV either, right?

On the other hand, if you've decided you do need a TV and what's more, you've splashed out on a nice big one with narrow bezels around the edge, you may as well go all the way and extend your viewing experience beyond the screen itself. This is what the Hue Play gradient lightstrip achieves admirably - with just a few minutes installation and setup.

Using the Hue Sync app, you can adjust the brightness and intensity of your lightstrip, setting it to turn on automatically when any of the connected source devices are powered up and you can even link to Alexa or Google Assistant for voice control.

I was actually pretty impressed with the result. The gradient lightstrip does a seamless job of matching the predominant colours on screen, no matter what those colours might be.

Although you might think this is some kind of sensory overload to make the most of full-on gaming sessions and action sequences in superhero movies, I've found a couple of other scenarios where the lightstrip proved its worth just as effectively.

Visually, dramas can be pretty boring. Oh sure, a good director can find unusual angles and call on filters and other effects to add to the mood but generally you're just watching two people talking. However, add a bit of Philips Hue Play into the mix and suddenly the director's tricks are brought further to life. A classic case in point is the recent (and final) season of Ozark. I've always considered the technical production on this programme to be exemplary, particularly the sound mixing. However, it was only once I started watching it with the Hue gradient lightstrip I realised how the entire show is shot exclusively in shades of blues and greens, presumably in homage to the water and tree-filled landscape on display. Very cool.

The other surprise came when I was watching the Highlanders trounce the Western Force the other night, a game made even more enjoyable by the extension of the pitch projected all over my wall - or at least that's how it seemed. When there were close-ups, the amplified colours of the players' jerseys created the impression they were in the room with you. I found it all extremely immersive - almost as though I'd been magically transported down to Forsyth Barr Stadium.

Interestingly, Philips has decided you don't need any lightstrip along the bottom of your TV - it's only long enough for the top and the sides. In the case of those of us using a soundbar, this is probably fair enough as the base of our screens is pretty much obscured. On the other hand, modern stands are generally pretty slim and often leave a visible gap below most of the TV.

Luckily for me, I have a couple of Philips Hue Play light bars, long narrow lights that work in a similar way to the lightstrip. These can be mounted sideways and added to the Hue Sync app as part of your setup. I've positioned them on my TV cabinet behind the soundbar where they're out of sight yet still manage to complete the overall, all-round syncing effect.

See? Completely unnecessary but quite fun.

If you're an avid gamer, I have no doubt you'd find the effect this kind of setup can create to be satisfyingly immersive.

Apart from the price, the only other drawback of this lighting system is the fact it relies on source video from external devices - there's no way to mirror content from apps and streaming services installed directly on your TV. It's for this reason I've resorted to using Netflix and SkyGo on my phone instead, streaming through the Sync Box via a Google Chromecast. I wish there was a Hue app we could load onto our TV's to avoid this extra step.

Admittedly, Philips also makes Ambilight TV's with coloured LED's already built into the back panel to achieve a similar effect but that's not much help here.

The Hue gradient lightstrip is one of those tricky products I absolutely love but find hard to recommend because of the price - not just the price of the lightstrip itself but the other accessories required to make it all work. I can't fault the design, build quality, ease-of-use and reliability though. If this is something you've been considering and budget isn't an issue, I certainly won't stand in your way.