How important is the colour of your phone?

Important enough to influence which phone you end up buying?

While phones don't quite inhabit the same price bracket as a car (well, hopefully not anyway) they still represent a significant investment for most people so it's no surprise many consumers would be likely to shop around to get everything just right - including the colour.

Meanwhile, not every phone-maker has the resources to offer every colour of the rainbow. The wider the range of hues available, the more expensive the cost of manufacture. Luckily for Apple fans, there are enough iPhones sold to justify a pretty good selection,

And that selection just got bigger... 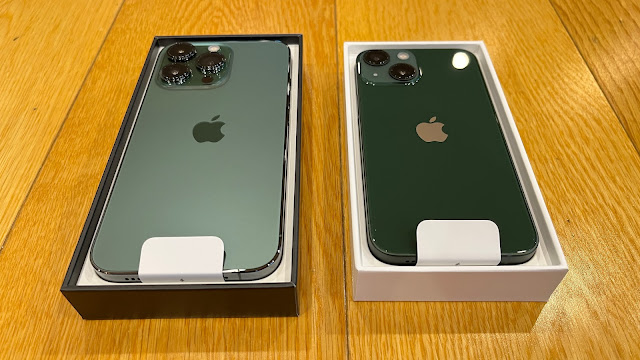 Over the last couple of years, green has come back into fashion with a flourish. From clothes to furniture to appliances, everyone is turning green - both literally and figuratively. Yes, the world's changing attitude towards preserving the environment is probably at least partly to blame for the increasing popularity of the more natural shades.

Apple has jumped on board with all four feet. The iPhone 13 and iPhone 13 mini are now available in Green or you can go for either the Pro or Pro Max in Alpine Green.

Before we get into a refresher course on the differences between all those phones themselves, let me try and describe the difference in the two new shades of green. 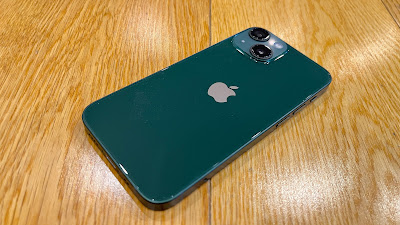 The green on the 13 and the mini is quite a dark shade of green - I'd probably describe it as Forest Green, although Apple simply calls it, Green. The glass on the back of these phones has been “precision milled” apparently - I don’t really know what that means but the result is a flawless, almost mirror-like surface that catches and reflects light quite dramatically. 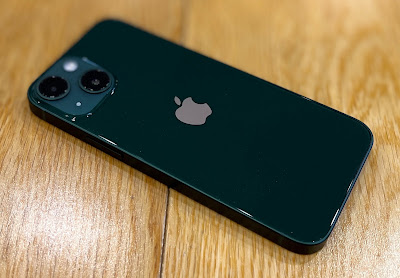 Unfortunately, because it’s so shiny, it also catches a fair few fingerprints as well - not at all uncommon for most glass-backed handsets. The aluminium band around the edge of the device has a much more muted, matte finish but is also coloured green to match, as are the power and volume buttons. As a bit of a contrast, the glass covering the the camera module seems to be slightly frosted, creating a lighter green than the rest of the rear panel. On the iPhone 13 mini, this is quite prominent as although the whole phone is smaller, the camera module is the same size as its larger siblings, so proportionally you get more of that lighter green. 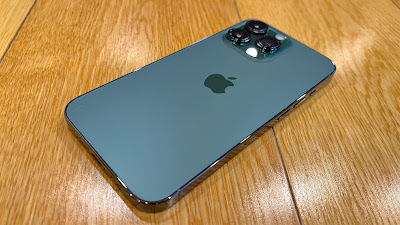 Meanwhile, the Alpine Green on the 13 Pro and 13 Pro Max is a different story altogether. In fact, it’s almost a completely opposite scenario; the majority of the rear panel seems frosted - almost with the sheen of brushed metal - while the green under the glass of the camera module is a shinier, brighter shade. In fact, what you’re looking at on the iPhone 13 Pro is multiple layers of nanometre-scale metallic ceramics combined with textured matte glass… but then you probably guessed that already, right?

The point is, not only is this all extremely durable but the shimmering effect is very translucent and soothing. Best of all, because of the softer finish, no fingerprints to speak of at all. However, the bands around the edge of the Pro models are made from surgical grade stainless steel, so that’s the really shiny part on these phones and yes, prone to being smeared with disgusting finger grease. While these steel edges are also coloured to match the rear panel, the effect is incredibly subtle and again the sheer shiny-ness of the steel reflects most of the light so the colour is actually kind of hard to detect.

The whole package though is standout. And I don’t even really like green that much. (Bit of a frank confession in a review about green phones, I know) But when I lifted the iPhone 13 Pro out of its box, I actually did a little involuntary intake of breath and may have said, “Oh yeah. That’s nice.” Out loud. With only the dog in the room. He seemed moderately interested. But then he loves to chew boxes.

Let’s not forget these phones are not just all about pretty colours, they’re two of the best phones money can buy right now.

I’d never even used an iPhone mini before, so I was intrigued to tuck it into its matching green MagSafe case and put it through its paces.

Obviously, at 5.4-inches, the display is quite a bit smaller than the iPhone 13 and 13 Pro, which both sport 6.1-inch screens. In saying that, the new generation iPhone SE has a smaller display again - just 4.7-inches so I was surprised to find I didn’t feel all that cramped when using the mini - although there was the odd bit of text that made my tired, old eyes squint a bit, something than can be adjusted in the settings of course.

I’ve used the base-model iPhone 13 a lot since it came out last year and while I was aware that technically, the mini is effectively identical, just smaller, it still took me by surprise when I could use all the same camera effects and use the phone in all the same ways - the whole time taking up a lot less space in my pocket.

I did notice the effect of the smaller battery but thanks to my collection of wireless chargers everywhere I go - especially in my car - the couple of hours less charge never prevented me getting through the day.

The real surprise is how much the mini has in common with the iPhone 13 Pro. First up, of all manufacturers Apple absolutely leads the way when it comes to changing from one of its devices to another. It’s so effortless, it makes me smile every time I do it. All four of the iPhone 13’s share the same A15 Bionic chip, widely accepted as the fastest and most powerful in the current crop of phones anyone has to offer.

This means operating any of these devices is truly seamless - always smooth and super fast. The Pro models take this even further thanks to their adaptive refresh rates on their ProMotion displays. Make no mistake, the display on the mini is wonderful; sharp, accurate and a pleasure to use - it’s just that the Pro takes that experience to another level. 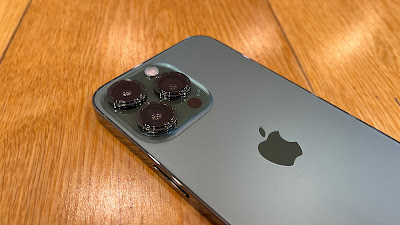 The other big differences are all to do with the camera setup. All four 13’s have improved night-shooting abilities and new video features like Cinematic mode but the Pro has an extra telephoto lens for even better optical zoom and a LiDAR scanner enabling much faster focus, especially in low light. The Pro’s are also setup to shoot in macro too.

Oh, and when it comes to battery life, the 13 Pro absolutely smashes it. You’ll have no concerns there.

There’s a lot of discussion about which phone has the best camera right now. I’m not a photography expert but I do know the iPhone 13 Pro and Pro Max are always part of that discussion.

I could get bogged down listing off the dozens of other features these phones offer. But we know they’re great, that’s why so many people keep buying them. Personally, I still don’t love iOS as a user interface - it just isn’t customisable in the ways I want it to be. For instance, a rotating Home Screen like you get with the iPads would be a good start. But these days the updates seem to come through thick and fast with constant little tweaks and improvements that lead me to believe iOS will soon give me everything I ask for - and more.

One thing’s for sure, if what you’ve been asking for is a green phone, has Apple got a deal for you. In fact, there are four deals and they all look pretty damn good.

Click here for more information and pricing on the Apple iPhone mini (now in Green).

Click here for more information and pricing on the Apple iPhone 13 Pro (now in Alpine Green).