Take the classic kiwi sing-along for example. This is definitely the best time of year for it... balmy evenings... barbecue or beach party - maybe camping. Friends, family, possibly a few beverages... someone whips out a guitar and before you know it everyone's crooning along to Better Be Home Soon... or The Gambler...

Well, joining in for the choruses anyway... nobody really knows all the words to the verses do they? Who cares what the words are anyway?

It's been that way forever.

Surely it doesn't get better than this?... 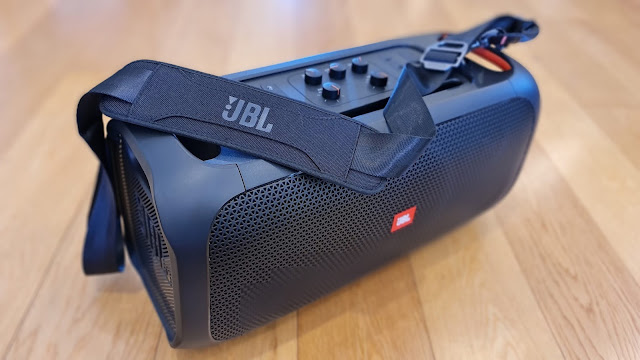 Look, I get the kiwi sing-along is about the lowest-tech form of entertainment around and that's why it's so awesome and that's the way it should probably stay... but JBL has had some other ideas and is now offering them to you in a single box. 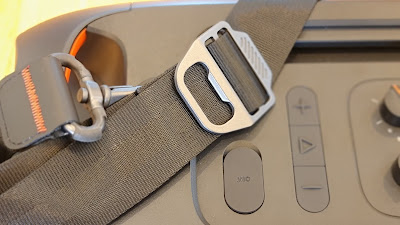 The PartyBox On-The-Go is a truly awesome bluetooth speaker. This thing looks almost like an old-fashioned boom-box which is probably no accident. It's pretty big and quite heavy - so there's a fully adjustable shoulder strap included and a carry-handle on each end. There's a wider, slightly padded neck pad and the buckle on the strap even incorporates a bottle opener. That's just a little hint the designers have thought of everything here.

For example, the entire rear side of the PartyBox is padded. I couldn't really figure out why until I started carrying it about the place; that's the side that rests against your body. Yes, it's big and heavy but they've truly done all they can to make it comfortable to cart around.

Its IPX4 splash-proof rating even means you should be able to use it poolside or at the beach without too much worry.

So yes, this PartyBox is portable.

It's also way, way more than just a bluetooth speaker. 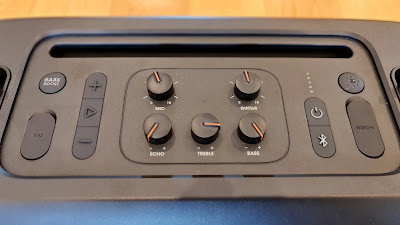 For starters, you're dealing with 100W RMS of speaker power from a 5.25-inch woofer and two 1.75-inch tweeters. This baby bangs the beat out nice and hard - there's even a Bass Boost mode to really make the floorboards shake. And if all that isn't enough to get the neighbours complaining, you can actually pair another PartyBox On-The-Go via TWS Mode - this creates a left and right stereo setup and doubles the power.

The sound is warm, rich and spacious. As I've pointed out, it ramps up plenty loud but it's also a lovely speaker to listen to at low levels for a bit of background atmos too.

So let's really get the party started. 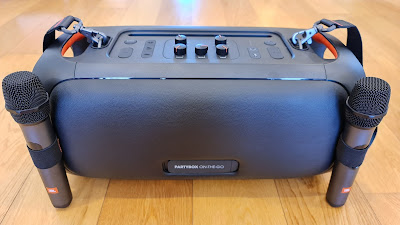 The PartyBox On-The-Go comes with a couple of wireless mics, pre-paired and ready to go. These include their own little carry-pouches and there's a stretchy holder for each one at each end of the speaker. They'll connect automatically once you turn them on and they actually sound pretty decent - depending on who's singing of course. There's an echo (reverb) control which will help give most average divas a more professional edge and of course you can wind the mic volume up or down - again, depending who's singing. Unfortunately, there's only one volume control to cover both mics so if one performer sings a lot louder or more out of tune than the other, sadly there's not much you can do.

So that's all your karaoke requirements sorted right there. The PartyBox has a long slot running along the top above the controls - this is the Mobile Device Dock, where you can sit your phone or tablet so you can read the lyrics displayed on your favourite karaoke app. I had a pretty good time sharing in some Christmas karaoke a couple of weeks ago - my belated apologies to the family members present who were subjected to my try-hard Frank Sinatra, Bing Crosby and Michael Buble impersonations.

It's not just a karaoke machine though. 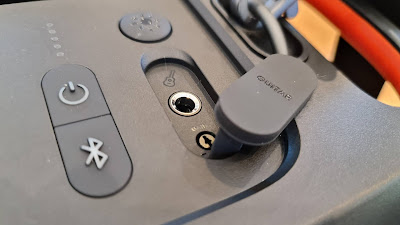 There are also inputs for guitar and another mic. Now, don't mistake this for some kind of stage amp - it's not that powerful - but as far as beefing up that kiwi sing-along we keep talking about, the PartyBox does a fine job. 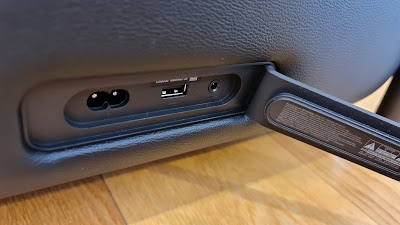 This might actually be the most versatile speaker I've ever reviewed as there's a splash-proof panel on the back concealing not just the AC power socket (for a standard figure-eight cord you should be able to find easily if you haven't brought yours with you) but also an AUX-in socket and a USB slot. Not only will this 5V/2.1A slot keep your phone or tablet fully charged, you can also plug in a flash drive with your playlist loaded on it. Don't get too excited about that last feature; I've tested it and it works but you can't really pick and choose which tracks to play off your USB - the PartyBox just automatically starts playing the tracks in alphabetical order when you plug your stick in. A good backup plan if you're out of Spotify range though.

As you can probably tell, I'm a big fan of this machine. It's feature-packed and easy to use. There are are couple of weaknesses though. First-up; battery life. I understand the power demands made by running several wireless devices simultaneously - especially from a speaker array this powerful. Even so, this is a big unit and I would have thought there'd be a power cell large enough to keep things running longer than the six hours the manual claims. (That's up to six hours mind you) Obviously, most parties won't last much longer than that - not my parties anyway - but if you're taking the PartyBox away for the weekend, you'll have to find somewhere to plug it in at some stage.

Secondly; the light show. It isn't a show. It's an LED ring around the central woofer that goes round and round, flashes in alternating thirds or pulses up and down from the bottom. You can select which of these modes you like best or turn it off completely. While the lights cycle through pretty much every colour of the rainbow, you can't choose a particular colour and there are no other lighting effects anywhere else on the device. To be honest, I've found it so lame, I usually leave it off.

So don't buy the PartyBox On-The-Go for the lights but definitely buy it if you love a sing-along or a bit of casual karaoke. It really does combine all your favourite audio party tricks in one package. It's not a small package but the handles and shoulder-strap make taking it anywhere a breeze. Next time that invitation says B.Y.O., now you can bring your own microphones too.

Click here for more information on the JBL PartyBox On-The-Go.