I can't believe its only been two years since Samsung launched its first generation of Galaxy Buds.

Since then, Samsung has Plussed them, turned them Pro and even gone Live.

Too many models in such a short time? Given how many competing products there are out there and how quickly the technology is evolving, probably not.

And now they've done it again. 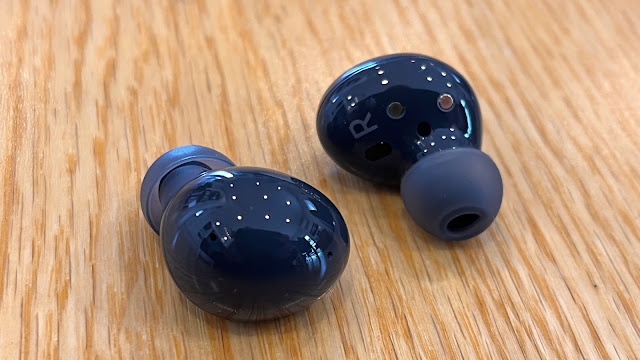 To look at, the Samsung Galaxy Buds2 seem less related to the original Buds or Buds+ designs and much more like the top-of-the-line Buds Pro. They're super smooth, very curvy and extremely shiny. Of all the earbuds out there (and I've tried about a million of them) they might be the most streamlined I've worn yet.

Even Samsung's own Galaxy Buds Live, with their notably small form-factor and totally unique "bean" shape don't quite sit as flush when inserted as these new Buds do. The Buds2 don't just look amazing because they're all smooth and curvy, they also come in a choice of four colours. Well, four if you count white. Boring. There's also Graphite, Lavender and Olive.

Personally, I can do without Olive. Why have tech companies suddenly decided people want green things? Yuck. 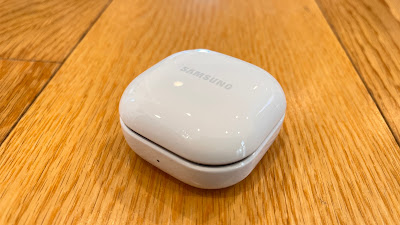 Graphite is definitely my choice - very chic - somewhere between grey and black. In a neat little bit of design flair, the charging case - which is basically the same, square, little pillbox as we've seen for both the Pro and Live models - is now a two-tone affair; white on the outside then matching whichever bud colour you've chosen inside. There's a little glimpse of the internal casing showing between the lid and the base just for funsies. Cute. 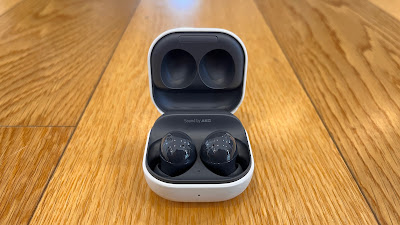 The case charges both wirelessly and via USB-C - supplying enough charge for up to 21 hours or so when fully juiced. The Buds2 themselves should do at least five hours non-stop, even with ANC activated. Basically, when it comes to battery life, they're definitely in that range where you don't really have to worry about charging them - as long as you do it when convenient, you'll be fine.

So let's talk Active Noise Cancelling, now that I've mentioned it. This isn't the absolute, "Cone of silence" level ANC some headphones and earbuds promise but it's good enough for me - and given the original Galaxy Buds didn't have it at all, a great improvement. You can certainly hear the difference between having ANC on or not - this can be toggled on or off via Samsung's Wearable app or using the capacitive touch controls on the buds themselves... and this is where we get into a bit of a pickle.

Although there's an iOS version of the app for setting up your Buds+ or Buds Live devices, that's just not an option for Galaxy Buds2. As a result, I can't recommend these earbuds for iPhone/iPad users - they connect fine but without the extra functionality and customisation offered by the Wearable app, there's no point. Unless...

You know someone with an Android phone. Because the Buds2 can be paired with multiple devices, you can set them up the way you want on an Android, then swap them back to your iPhone - the settings will stay programmed in.

Meanwhile, if you're swapping between Samsung devices only, life is much more streamlined - Auto Switch literally figures out if you're using your Samsung handset, tablet or Galaxy Watch4 and connects the Buds2 accordingly - without you having to lift a finger.

And to be honest, getting your fingers involved is where controlling the Buds2 becomes a little hairy.

The Buds2 are tiny - the smallest and lightest Samsung has ever produced. This means they're incredibly comfortable to wear - pretty much weightless when inserted. Unfortunately, that also means not much room for error when it comes to using the touch controls. It's almost impossible to adjust them in your ears without playing or pausing accidentally - there's hardly anything you can touch that isn't part of the control surface. If this becomes a major issue, you can deactivate the touch controls completely, of course - all of which is easily accessed via the Wearable app. Single, double, triple and long presses are all programmable, not just with play commands but also volume, voice commands and ANC control - the latter including Ambient Mode, the opposite of noise cancelling, otherwise known as pass-through or transparency - for when you need to hear the outside world for mundane stuff like PA announcements, oncoming traffic or heaven forbid, conversations with actual human beings. Ick.

Samsung's own Bixby voice assistant is the only one you can enable for touch-free activation. Any other will require you to dedicate a button to it.

So you see the trend here; as long as you keep things Samsung, the capabilities of the Buds2 are exponentially expanded.

Wait... I'm forgetting something... Oh yeah... How do these things actually sound? Pretty decent, frankly - especially if you like some big, boomy bass punch. "Is This Love?" by James Arthur seems to be a track built mostly on an enormous pile of drum samples, all of which kick through impressively given how wee these buds are. In fact, the sense of space is quite mesmerising - the long, sweeping tracks on Badbadnotgood's latest album have been mixed to make the most of the spatial audio abilities some streaming services now offer. This is more than stereo, it's 3D music and it sounds pretty cool through the Buds2.

I feel like there's something missing somewhere around the mid-to-top frequencies, or that could just be me getting old. Regardless, there are a few preset EQ options you can fiddle around with (again, only on that app of course) to try and tweak things a bit.

My conclusion is while these may not be the go-to buds for non-Samsung users, if you are invested in that ecosystem, they're pretty great. Except for one thing. 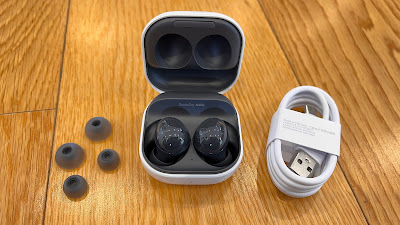 As with many higher-end earbuds these days, you can do a fit test via the app to make sure you've chosen the right size tips (a choice of three in the box) and you've positioned them securely. I've run that test. Several times. And yet, generally I only get a few hundred metres down the road on my 5km run before I'm having to twist one bud or the other back into place, often pausing my podcast in the process.

This is frustrating, as Samsung has upped the water resistance rating to IPX2 - which should make them reasonably rain and sweatproof - but there's no way I'd choose these to exercise with. I'd just be too worried I was about to lose one the whole time.

It's a shame, because they sound terrific, call quality is excellent, I'm more than happy with the ANC and they look... well, I think they might be the best looking earbuds on the market.

Click here for more information and pricing on the Samsung Galaxy Buds2.