This is going to be tricky to condense into a single article. Reviewing computers is always a bit of a challenge anyway - there's a lot you can do with a computer... as opposed to a smart light or a Wi-Fi extender for example.

So what about a computer that's different to any I've used before? Not just the way it looks but the way it works... even the keys do different things and are in different places.

I've been using this one for six weeks or so now and I still feel like a beginner, so you'll have to excuse me if you've heard some of these observations before. Remember; I'm an Apple newbie - you might be too and if that's the case, I hope you might find this helpful... 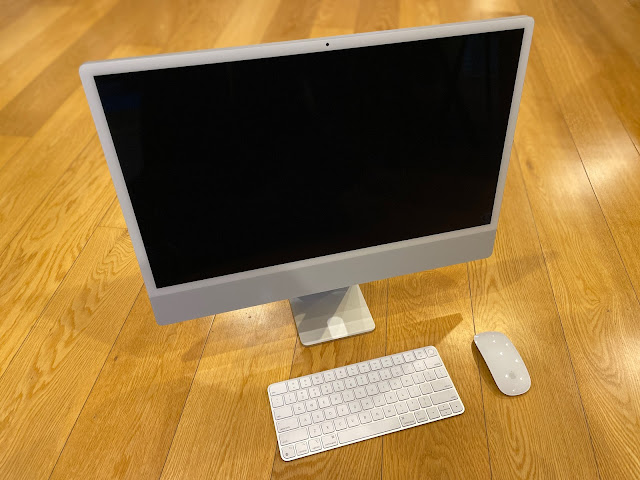 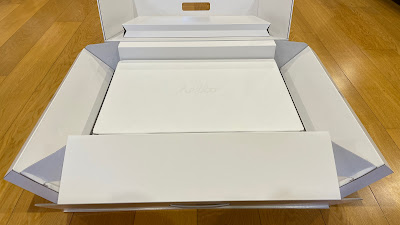 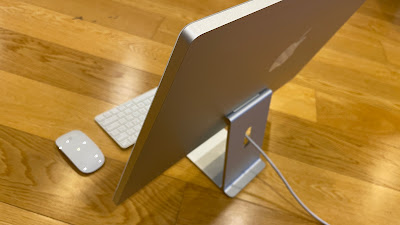 Because, just like the original iMac back in 1998, there is no visible computer to this computer - it's all screen. Of course, those 1998 models were notable not only for their range of bright colours but also the fact the whole computer was built into the screen itself - perhaps not all that miraculous given these were still CRT displays with plenty of room to bung in extra gear like hard drives and motherboards. Screen technology has evolved rather dramatically over the last 23 years, so while the principle is the same - the whole computer is built into the screen - that screen is flatter and slimmer than ever. 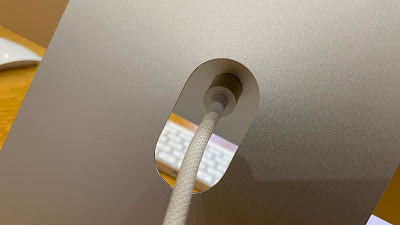 This means while this iMac is about the same same size as its 2019 predecessor, you now get a vastly improved 24-inch display instead of the previous 21.5-inches. It really is flat too - front and back - and only 11.5mm thin which is pretty crazy. In fact, when you make a Mac that thin, you create a few problems for yourself; most plugs are longer than that which means the headphone jack is now at the side and the power cable had to be completely redesigned to connect magnetically.

That cable is an attractive, heavy-duty, braided affair, coloured to match whichever of the seven choices you've decided on. Unfortunately, I didn't get to choose a colour (I would have gone with Pink - which is actually red and light red) but reviewers can't be choosers. It's also not just a power cable - not on this model, anyway. My iMac has an ethernet port on the external power brick so the connecting cable is a hybrid source of both power and internet.

There are three configurations available from the Apple store... the base model which has 256GB of storage, just two Thunderbolt USB 4 ports and is Wi-Fi-only ($2149.00)... the model I'm using, also 256GB but with two extra USB 3 ports, gigabit ethernet and Touch ID on its Magic Keyboard($2499.00)... or another $350 will get you the 512GB version. Each model features the same Apple M1 chip, 8GB of unified memory and that spectacular 24-inch, 4.5K Retina display, although the base model is slightly less powerful in terms of its discrete graphics capability and is only available in four colours, (blue, green, pink and silver) not all seven. 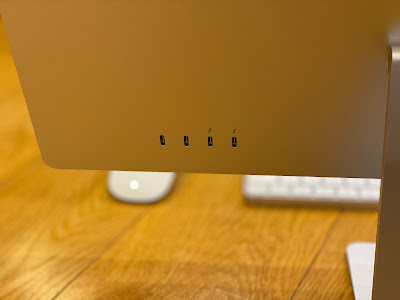 Whether your model has two or four USB ports, they're all situated at the back which is not actually particularly accessible - especially if you have accessories you need to plug in and out on a regular basis. The stand has a reasonable amount of tilt range, although you can't adjust the height. At least it comes fully assembled out of the box and has a convenient central cavity to help keep cables tidy.

Storage-wise - I'd argue the 512GB maximum is not enough for a modern computer - especially given the reason many people buy a Mac in the first place is to manage and edit photos and videos. Just as well external storage options are faster and more reliable than ever thanks to those Thunderbolt USB 4 ports, especially given there's no way to access the inside of the iMac to upgrade anything internally.

Some critics have commented on the iPad-like bezels and large chin - obviously most modern monitors are basically edgeless - but I can't say this worries me at all given how compact the the device is as a whole.

In fact, as computers go, I consider this year's iMac to be the most attractive desktop I've ever used. Between its slimness and small stand, it takes up hardly any surface space at all and the included wireless Magic Keyboard is also extremely compact, leaving plenty of room for mouse, trackpad, accessories, drinks and snacks. 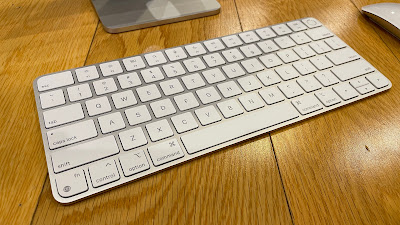 I'm a bit fifty-fifty on that keyboard. The keys themselves a pretty nicely spaced-out and have surprisingly good travel, given how thin the keyboard is. However, I'd prefer the option to tilt the back of keyboard up as I find I'm used to a more ergonomic angle. Of course, my biggest gripe is getting used to the Control, Option and Command keys and what they do, as opposed to the ones I'm used to. 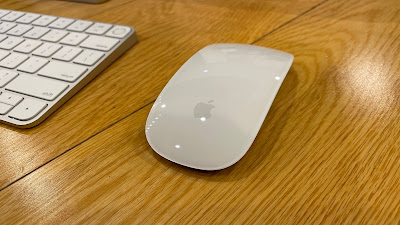 The same goes for the Magic Mouse - sure it's sleek and pretty but I don't think I'll ever understand Apple's reluctance to introduce a second button to right-click with. Given Macs are generally considered to be the be-all and end-all when it comes to video and audio editing, it's pretty hard yakka when you can't right click.

I was moaning about this some Mac-using friends of mine recently and they looked at me like I was an idiot. "Why don't you just plug in a different mouse?"

Excellent question. I'd been so determined to learn to do things the "Apple" way, I'd forgotten it's not actually compulsory. Obviously you can connect whatever mouse and keyboard you like.

(12/08/2021 - A week or so after writing this, I was doing a deep dive into the device settings and discovered you can in fact switch on right-click functionality for the Magic Mouse. Although... why this isn't set to "on" by default is kind of a mystery)

But that hasn't been my only pain-point on the MacOS learning curve. Just navigating my way around the iMac has been challenging for me. I get the impression Apple doesn't want you poking around amongst things like system files and advanced configuration settings - it's taken me several weeks to get the hang of finding and moving files for instance. In fact, for quite a while I thought moving files from one location to another was impossible as I could only Copy files, not Cut them. I then discovered a keyboard shortcut to do this but seriously, why do these things have to be so hard?

Also, who's idea was it to make lists appear from the bottom up? Perhaps that makes sense to whomever designed the Mac Downloads folder but I'm used to doing things another way.

Of course, these are just the grumblings of a cantankerous old geezer, stuck in his ways and struggling to learn a new system - a system that definitely has just as many advantages.

There's no denying this is a computer that works quickly, smoothly and efficiently, straight out of the box. Like any other Apple product, it's very hard to make this thing do something it's not comfortable with and as a result, it keeps humming along without a hitch. I could do a deep dive listing off processing speeds, graphics capabilities and the like but you can read all about that on the spec sheet if you want. In real terms, when it comes to doing all the things you need a family computer to do, the 24-inch iMac delivers everywhere.

As already discussed, the display is outstanding; sharp, clear with true-to-life tones and a decent anti-reflective surface if you have a window behind you like I do. Combined with an impressive, distortion-free, six-speaker sound system, it's actually a great device for watching movies or streaming TV on. In fact, bass response and dynamic range is well above the norm for desktop speakers so your favourite playlist will sound pretty good while you work. 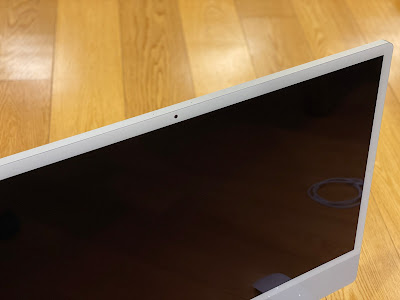 I'm also impressed with the 1080p FaceTime HD camera - once again, a significant cut above the mediocre shooters built into most laptops and tablets.

And of course, this is the big advantage of choosing an iMac - things like speakers and cameras are built in - not optional extras - and they just work.

Perhaps the feature I've enjoyed most so far is the integration of other Apple devices. For example; you can unlock the iMac with your Apple Watch - saving you manually entering a password. If you have an Apple HomePod mini speaker or two scattered around the house, you can easily stream audio from your iMac or AirPlay video to a compatible TV. But the most useful integration of all has been having my phone notifications appear on screen and being able to AirDrop files between iPhone and iMac so seamlessly.

I was also very impressed with the iMac's microphone array the other night - not just for video calling but again, in conjunction with my iPhone. If you've ever spent too much time on hold with a call centre, you'll appreciate how easy it was for me to simply switch the audio from my phone to the iMac while I carried on working. Then, once I was finally taken off hold, I was able to talk via the computer with the person on the other end none the wiser.

All of this integration happens pretty much automatically, as long as you're signed in with the same Apple ID. Oh... were you wondering if you can do the same with non-Apple devices? Ummm... I'm guessing, not easily.

But that's no surprise - historically Apple hasn't "played well with others"... although I get the feeling that's starting to change. Connecting to printers seems to be easier than ever these days and Apple TV has started appearing on a heck of a lot of non-Apple devices. What's more, you can use Siri on the iMac as a kind of smart home hub, controlling any HomeKit-enabled devices you've set up around the house.

In short, although I've had to do a crash course in the operating system and some of the keyboard shortcuts, I have no reservations in recommending the 24-Inch iMac as a great, all-round family computing solution. It's not the cheapest option although I actually think it's pretty fairly priced for the specs and features it offers. It's fast and powerful, it looks incredible, the multi-media experience is first rate and it takes up very little space on your desk. If you're already using other Apple devices, it's really a bit of a no-brainer.

Click here for more information and pricing on the iMac 24".