It's been a very long time since I played around with a Panasonic TV.

In fact, not since I owned one. It was a 42-inch plasma and it was pretty great. The screen was big and flat and there was this new way of connecting things called HDMI. That meant I could use my sound system remote to turn the TV on and off. Crazy stuff. What a time.

Bearing in mind this was back when people still had sound systems. And DVD players. And TV aerials. Sorry kids, I realise you have no idea what I'm talking about. Trust me; 20 years ago this was all cutting-edge stuff.

After smartphones, computers and cars, the TV might be the gadget that has evolved the most over the years - who would have guessed one day we'd be hanging them on the wall?

So obviously I was interested to see just haw far Panasonic has come... 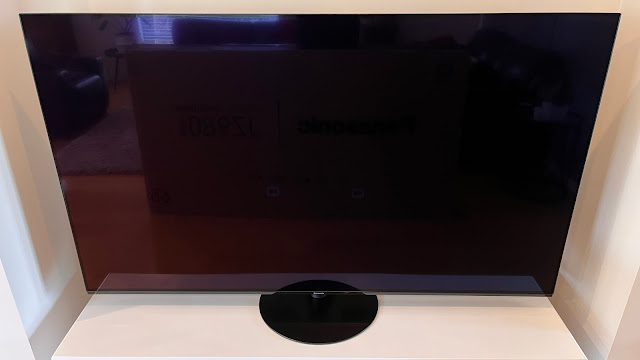 The Panasonic JZ980 is a funny looking telly - from the back. When I unboxed it I was amazed to discover it's the thinnest TV I've ever seen, not much thicker than the glass of the display itself... but only for the top two-fifths. Then it angles out to a much thicker rear housing that means this won't be an ideal option for the wall. 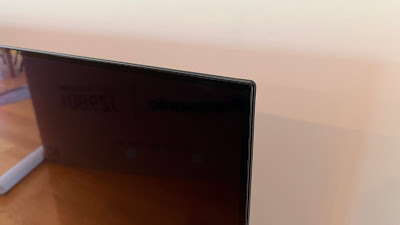 That's okay, because the central, circular stand is attractive enough and also low-profile enough to sit a soundbar on if that's what you're planning.

That is what you should be planning, by the way. Although Panasonic promises "3D cinematic sound" via Dolby Atmos, the built-in speaker array just doesn't deliver. Oh, it's fine. You can wind things up fairly loud. But in a reasonably large room like the one I've set it up in, without the addition of some external speakers or at least a decent soundbar, the listening experience is just a bit thin.

Which is not what you want because the picture quality is quite the opposite. From the moment I logged into Netflix to watch my next episode of Another Life, I was genuinely taken aback by the depth, richness and clarity of the 65-inch, 4K OLED display. Remember, this model is at the bottom of Panasonic's range of OLED options, yet no matter what the light conditions or style of content, I love watching this TV. From the depths of space in Another Life, to the bright, sunny pastures of the Dutton Ranch on Yellowstone, everything looks so real. I can see every line and wrinkle on Kevin Costner's face. Awesome.

And that's even when I'm streaming Yellowstone from an app on my phone via Chromecast. I don't really understand what the HCX Pro AI Processor is, but it sure does an incredible job of scaling up whatever is on screen to its maximum viewing potential.

For around three and a half-thousand bucks, this is a very good display.

There is a but... although I'm not sure how much you're going to care about it. Panasonic has decided to come up with its own operating system. In my experience of reviewing a range of gadgets over the years, this is never a good idea. Minus a few notable exceptions, there's a reason the majority of smart TV's use Android TV (which has now evolved into Google TV) - it works and people like it. For Android phone users in particular, it's a familiar interface and there's a tremendous amount of content created for it. 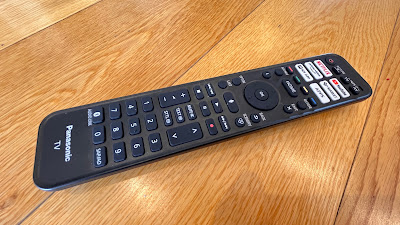 When I fired up the JZ980 to discover just a handful of apps, I have admit, my heart sank a little. Don't panic, all the trusty favourites are there; there are even dedicated shortcut buttons on the remote for Netflix, YouTube and Prime Video. There's also a shortcut button labelled "My App" - which can be customised to launch the app of your choice. Not that there's much choice.

Push the Market button and you might expect a never-ending library of other options; streaming apps from around the world, browsers, media players - perhaps even access to media servers like Plex. But no. TVNZ On Demand? Yes. ThreeNow? No. Disney Plus? Yes. Apple TV+? Only just added this week - and that's promising because it indicates Panasonic's OS is still a work in progress and there might be more to come. 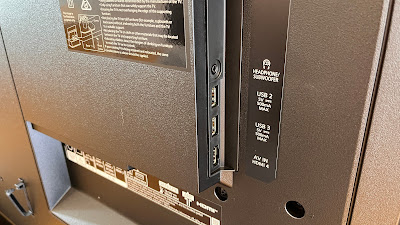 The HDMI, AV and USB ports are all rather difficult to access, tucked away at the back and even at the bottom of the back. Not that I'm sure why there are so many USB ports (3 in total) as the only reason I could see to use them was to save recordings from live TV. I certainly couldn't play any of the movies I have saved on my external hard drive. There's also no way to connect to the JZ980 wirelessly - just because it now has the Apple TV+ app doesn't mean you can AirPlay to it. There's also no built-in Chromecast - but there's nothing stopping you plugging one in of course.

There are an incredible number of settings you can fiddle with if you really want to - from picture and sound tweaks right down to choosing if you want Dolby Atmos and Dolby Vision banners to appear when your content supports those. What really made me chuckle was the font on the settings menu is still exactly the same as on my trusty Panasonic Plasma from all those years ago.

The important thing is, and I still note it to myself after using this TV for several weeks, the picture is standout. Every time I get a bit frustrated with the user interface or the lack of app content, it all goes away once I start watching something, because that's how good this OLED screen is. And at the end of the day, isn't the picture what TV is really all about?