I have no hair. I haven't had any for decades. Therefore I am perhaps the least qualified person possible when it comes to reviewing any kind of hair drying device.

My head pretty much drip dries of its own accord. Worst case scenario, I have to rub it a couple of times with a towel.

I'm not complaining. No matter the humidity, I remain frizz-free. I've never had to re-take a selfie because a gust of wind blew hair in my face. I've had to re-take them because of my face... but that's another story.

As for flyaways. Until very recently, I'd never heard of them.

I do love a Dyson.

Given they consistently produce the best vacuum cleaners, fans and air purifiers I've ever used, I figured the hair dryer is probably pretty next level too. 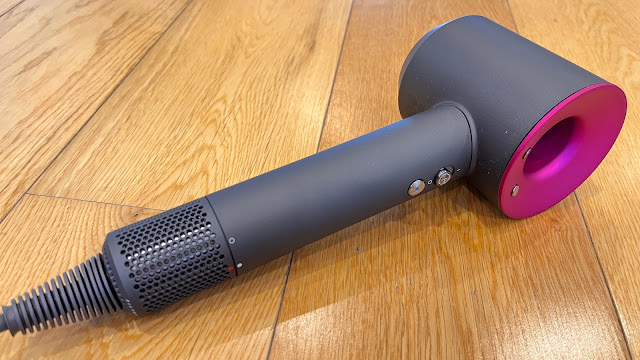 The Dyson Supersonic is not new. In fact, people have been reverse-vacuuming their hair since 2016. And loving it.

As far as I can make out, from my remote distance as a casual observer of those with hair, in just five years Dyson has somehow completely reset the standard when it comes to home hair drying - in a very similar way to how Sir James Dyson's original vacuum cleaner turned that industry on its head.

So much so, even professional hair-dressers are looking to Dyson as their go-to weapon of choice.

Obviously, I've had to outsource my test-subject, given I personally have no hair.

This meant presenting the Domestic Manager with the hair-dryer famous for not really looking like a hair-dryer.

Initially she claimed it was very complicated to set up. I think that just meant there were a lot of bits in the box. 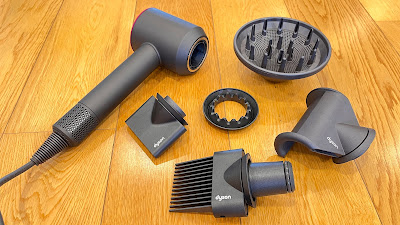 Again, this reminds me of my experience unboxing Dyson vacuums. They certainly aren't shy with the accessories but I've always thought of this as a major bonus - not a drawback.

A couple of weeks or so into it, Domestic Manager now admits the Supersonic is, "Amazing".

In fact, she keeps raving about how simple the attachments are to... well... attach. This is because they simply magnetise into place. Not only does this make them easy to put on and take off, it also means you can rotate them to whatever angle you desire - kind of crucial when you want one half of your hair-style going one way and the other side the opposite.

No wonder the pros love this thing.

Another reason is the balance. Unlike conventional hair dryers that use a large fan built into the top half of the device, the Supersonic keeps all the important stuff down in the handle, making things much more comfortable to hold. The important stuff includes the unique V9 digital motor, which spins up to 110,000 revolutions per minute.

Does that mean the Supersonic dries faster? Indeed it does. And that's not due to excessive heat either. By measuring the air temperature forty times a second, heat damage is avoided, which protects your hair's shine.

I know this is true because Domestic Manager's hair is suddenly looking shinier. Yes, I actually noticed. Remember, we're still semi-locked down here in Auckland so it's been a very long time since she's been to the salon. Personally, I think she looks amazing. (I really hope she's reading this) 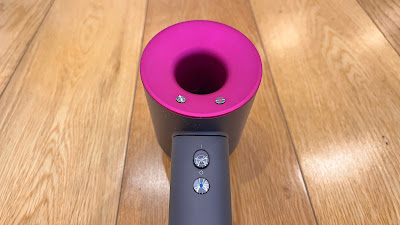 She's also commented on how the controls are intuitive and easily accessible. Okay... maybe she didn't use the word, "Intuitive" - but she definitely said she likes them. 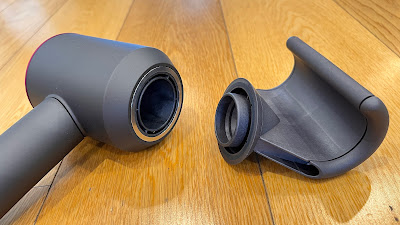 One of those bits that now comes in the box is the all-new Flyaway Tool, which utilises some kind of crazy coriolis physics to tame those frustrating, out of control hairs that just refuse to settle down. By blowing tresses over the curve of the Flyaway Tool, longer hairs are lifted into place while those pesky, shorter, more sticky-out hairs are forced underneath. Dyson calls this the Coanda effect. I've seen it in action and it's impressive - sort of like a hairy magic trick.

In fact, it's pretty hard not to be impressed by everything Dyson does. I've watched quite a bit of footage from their design and manufacturing facilities. I've also had the opportunity to chat with several Dyson engineers over the years and it's clear to me they're all extremely passionate about what they do, testing thousands of prototypes and trying all sorts of crazy ideas before coming up with the golden solution to an everyday problem - in this case, those damnable flyaways.

Sure, you pay a premium for the product but as usual, the brilliance of Dyson's design means you're saving serious time every day, not to mention a heck of a lot of hair frustration.

And you've got to admit, it looks pretty funky too. Especially in the limited edition Prussian Blue and Rich Copper available from the Dyson website as we speak.

Did I mention how great the Domestic Manager's hair is looking? See? Worth every cent.

Click here for more information and pricing on the Dyson Supersonic with Flyaway Tool.