There's a long list of reasons why I'm woefully unqualified to be a tech reviewer. A big one is I know next to nothing about photography.

Okay, sure I'm aware there are still actual cameras out there and allegedly, they take proper pictures and shoot real video. But it seems like you need to be licensed to drive one and in my experience, getting the stuff you've shot out of the camera and onto your social feeds can be a real mission.

It looks like I'm in for a reality check... 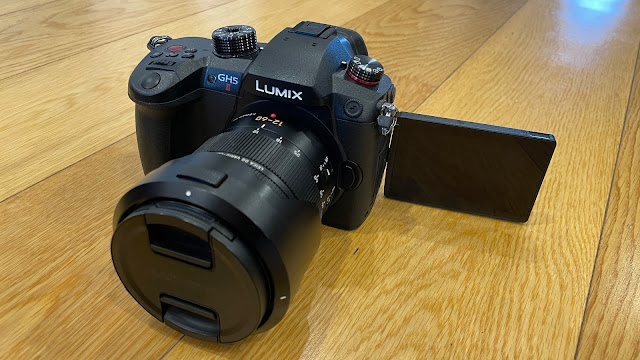 If you're already into "proper" cameras, this is not the review for you. I'm not going to do a deep dive on specs and sensors and frame rates and shutter speeds because to be perfectly honest, I have no frame of reference. I've used a few DSLM cameras in my time... but only a few.

So I'm coming at the Panasonic LUMIX GH5M2 from the point of view of a total rookie... A smartphone-to-camera convert, if you will. As such, I can't even compare this camera to the original GH5, so please forgive me if I point out features that aren't as new and exciting as I'm finding them.

The LUMIX GH5M2 I've been sent to try came with a 12-60mm lens to test it with... yes, that's how flash I am now - I have a camera that doesn't work unless you screw another bit onto it. 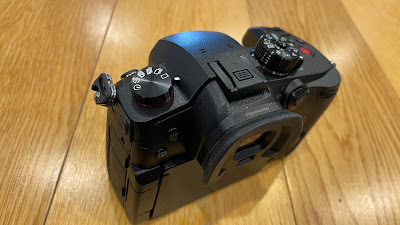 Okay... maybe I'm overcooking the naive newbie act a bit but let me start by saying I'd forgotten how heavy these things are. The GH5M2 weighs in at 727 grams... and that's without the lens - so it's a solid piece of kit. Not in a bad way though... there's a rubberised durability to this device that inspires confidence - it's also spash and dust-proof which means it'll probably cope with a bit of weather. All the compartments (battery, SD card, external ports etc) seal up nice and tight to keep bad stuff like moisture out. I'm definitely impressed with the build quality. 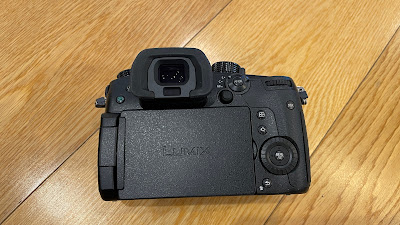 My only real concern, hard-knocks-wise, is the 3-inch LCD monitor screen - and that's only because it pops out and flips over for selfies. Not that I've had any issues with this mechanism at all and on the plus side you can flick it back and tuck it away completely if you want to use the OLED Live View Finder instead. This has built-in eye detection so you can choose to swap between screen and view-finder automatically if you want. 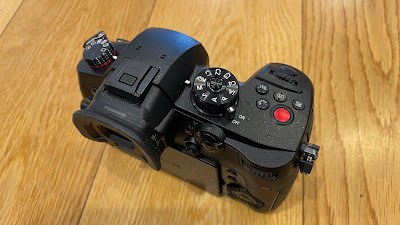 In terms of controls, everything is well set out and within easy reach. If I was to be super critical, I'd have to suggest there may be too many controls! There's a button or a dial for pretty much every function - most of wich you can also access on the touch-screen itself. This doesn't really bother me, although it does mean things seem a little cluttered and I have occasionaly pushed the wrong button - swapping the view-finders instead of choosing a filter for example. This sort of thing is down to muscle memory though and I'm sure I'd make far less of those fat-finger mistakes after a few more weeks' use.

The double up of physical and virtual controls is obviously common to cameras like these as I've encountered it on similar devices in the past. Of course, in the case of the LUMIX GH5M2, there's a third option... remote control.

Using the LUMIX Sync app, you can easily connect your phone to the camera - and I do mean easily. Every camera I've ever used before that's promised to connect via bluetooth or Wi-Fi has failed dismally. For me there's nothing more frustrating than unreliable connectivity like that - often the connection takes forever to set up and then drops out when you need it most. Well, not this time. The LUMIX Sync app makes pairing simple and the connection is infinitely more stable than what I've encountered previously. 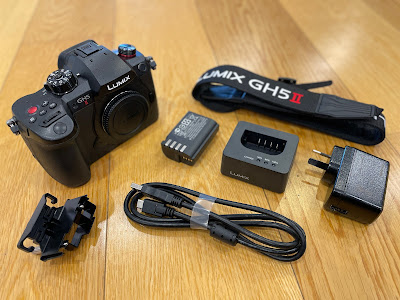 Once connected you have total functionality available to you via your phone's screen. Kind of essential given one of the GH5M2's big selling points is its ability to live-stream straight to Facebook or YouTube. In fact, the camera has a lot of little tweaks that add up to a very user-friendly streaming tool - you can plug in a power supply via USB-C while you're using it so you're guaranteed not to run out of juice mid broadcast. There's also a full-sized HDMI-out port for monitoring purposes and obviously jacks for external mic and headphones too. There's even an optional plug-in remote if you need a fourth method of control.

Connecting via the app also means you can browse and import images and videos so you can edit and upload to your feeds while you're on the go. Again, yes I realise this is a feature other cameras offer but in my experience, not at all reliably. Using LUMIX Sync with the GH5M2 has been nothing but fast, efficient and a pleasure.

As for picture and video quality... well... you'd expect something pretty decent from a $3000+ camera and the GH5M2 delivers all over the spectrum. Although I was surprised to find there's no built-in flash (once you've laid out out that kind of coin, what's another few hundred for a proper flash, right?) I was equally surprised how well the camera adjusts to low light shooting, even without one.

There are certainly more video shooting modes than I know what to do with - when it comes creating something cinematic, this is the real deal. The surprises kept coming here too; even without the use of an external microphone, the audio delivered by the built-in stero mic was crystal clear. There's even the option to reduce wind noise when shooting outdoors.

I love the fact there are two slots for SD cards and as I already mentioned, being able to charge the battery while you're using the GH5M2 is yet another way Panasonic has made this one of the more user-friendly cameras I've used - at least one that isn't built into a phone anyway.

At the end of the day, this is what sets the LUMIX GH5M2 apart for me; when I've forced myself to use DSLR or DSLM cameras instead of just my phone, that's always been exactly how it felt - like I'm forcing it. I don't like devices that make you use them a certain way - I want to do things my way. This camera gives me all the options I want... and more. But most refreshingly of all, the app actually works. Finally, this is a camera that seamlessly fits into my digital life instead of disrupting it.