Okay, there's only so many more times I'm going to be able to squeeze some more life out of that pun headline.

We all know why we're here and with a phone this big, I'm bound to have plenty to say - so let's just crack on into it... 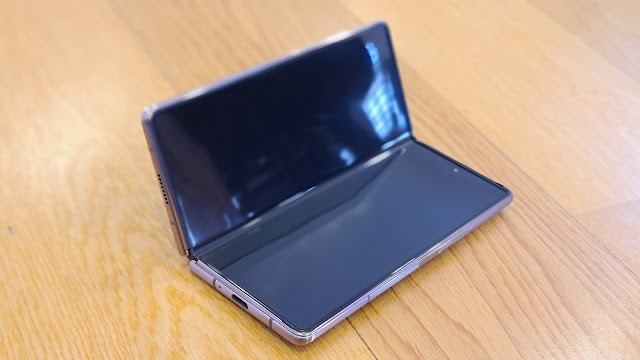 Samsung's successor to last year's Galaxy Fold is the Galaxy Z Fold2 5G - as the addition of the Z into the rather convoluted name suggests, Samsung has taken the things people loved about the Z Flip from earlier in the year and built them into the Fold. This is fantastic, because while Fold Mk. I was undoubtedly groundbreaking and innovative, it also felt decidedly experimental and fragile - not really what you want from a multi-thousand dollar device. The first thing you notice when you pick up the Z Fold2 is how much more solid and polished it feels. Oh, there's definitely still a long way to go; the large, inner display is prominently recessed into its frame making edge controls a bit fifty-fifty. 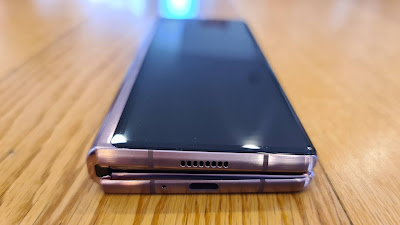 The handset still doesn't close completely flat and there's a lot of untidy-looking stuff going on around the hinge area; multiple layers of metal, plastic and glass giving an impression of clunkiness rather than elegance, which is a real shame as Samsung's new Mystic Bronze colour is definitely a winner and the phone itself delivers on pretty much all it promises. Starting with durability - alright, I admit it; I've dropped this $3400 phone not once but twice and I can't find any discernible damage - other than to my heart-rate. 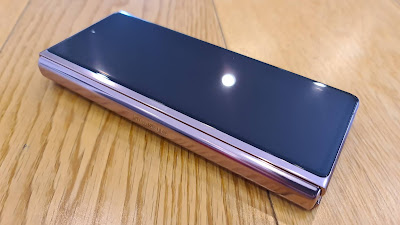 While there are just two colour choices, Mystic Bronze and Mystic Black, this time Samsung gives you the option to swap out the hinge colour when you order for silver, gold, blue or red. This comes with the Samsung logo embossed into it and conceals a new cam-based system that allows you to operate the phone in "Flex Mode" - half unfolded at an angle of your preference for a number of genuinely useful reasons. Mostly this would be for shooting or viewing pictures or video without a stand or tripod and we'll get into this in more detail shortly. Perhaps most usefully at all, it eliminates the need to join video-meetings via laptop as it can happily sit on a desk the same way. In fact, you'll look much better to everyone else because the front-facing camera on the Z Fold2 is likely to be light-years ahead of anything on a laptop or conventional tablet.

But let's backtrack and take a closer look at the two screens because let's be honest, that's what the fuss is all about. 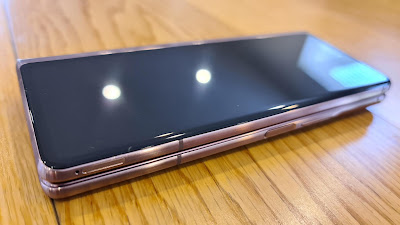 Firstly the outer or sub display - this is now a full 6.2inch HD+ screen which is probably the single most significant upgrade from the original design. Obviously, the main point of the exercise is still a phone that transforms into a tablet. Last year's model certainly delivered on the small-tablet part of the deal but when closed, its much smaller front screen was really far too cramped to be of much use past showing notifications and receiving calls. The outer screen on the Z Fold2 is a whole other story. Will still slim it now covers pretty much the entire front half of the device - even curving over the right-hand edge slightly. It sports a 10MP punch-hole camera centre-top and there's now enough space for a 4x6 icon home screen layout (not including the seventh row of home icons at the bottom). That means enough space for your favourite widgets and most apps will run perfectly normally meaning you can use the Z Fold2 as an everyday handset without opening it at all.

Not that there's anything "everyday" about its performance; in this market this is the only Samsung phone powered by the famous Qualcomm Snapdragon 865 - you might read reviews of other Samsung handsets with Snapdragon chips but that's likely to be in America or Europe - here we usually get similar silicon from Exynos. Can I tell the difference? Hmmm... I feel like the Z Fold2 is more responsive somehow - things happen just that much more instantaneously than on the other Samsung flagships I've tried. I'm probably imagining it, projecting the power of the price-tag onto the performance of the phone. Either way, the 3.09GHz CPU, the12GB of RAM and the 256GB of internal storage are more than enough to drive this remarkable device through it's endless list of unique tricks. 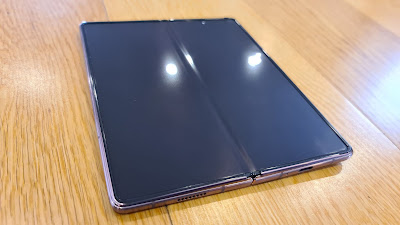 Not least of which is app continuity -  when you launch an app on the outer screen, open the phone and it appears all reformatted on that massive 7.2inch dynamic OLED inner display. While still not perfect - I've already mentioned the distinct lip all around the edges and the flexible protective layer is horrendous for fingerprints and feels sticky a lot of the time - the inner or main display certainly looks outstanding. The big news here is another 10MP selfie cam peeping out of a tiny punch hole instead of the unwieldly and intrusive camera module we were confronted with last year. I can't really describe the location of that camera as it depends which way up you're holding the device. It's either a quarter of the way down the left-hand side or three-quarters of the way across the top. The point is, it's nowhere that obvious anyway.

The result is a screen big enough to legitimately function as a tablet. Not only can you open three apps simultaneously, you can pair three together to launch from one Edge-Panel shortcut. This is slightly fiddly to set up but you only have to do it once and then next time you want your browser, mail client and file manager all open at once, it's just a single tap away.

I've been impressed with how many apps seem optimised for the Z Fold2's rather unique form-factor, although there are a few that insist on displaying in portrait - even though there isn't really a portrait orientation with this aspect ratio.

Some apps, like the camera, can even be used in Flex Mode - that's where the phone is half-folded. This means video controls display on one half while your shot appears on the other. Or you can review the photos you've just taken while you're lining up the next pic. When it comes to multi-tasking, this phone is easily the leader of the pack. 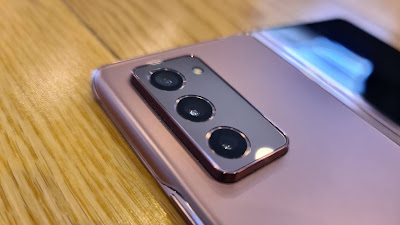 The rear-facing main camera is a triple lens affair so that all adds up to a grand total of five cameras altogether. The results are stunning - Samsung has definitely risen to the challenge photography-wise this year. The original Fold's niftiest trick was the ability to take selfies with the main shooter - thanks to being able to display your shot on the outer screen. Same deal this time around but there are even more features on offer, including being able to create your own filters based on photos you've already taken.

Some of my favourite advances are on the video side, like Tracking Auto Focus, keeping your main subject crystal clear, near or far. Or Zoom-in Mic - changing the audio detection to match the visual zoom. Most impressive has to be Auto Framing - an essential tool for any D.I.Y. video streamer. Set up your shot (perhaps using Flex Mode as your tripod), select Auto Framing, press record and the camera will automatically pan and zoom to keep you centre of attention. Hard to believe until you try it for yourself.

That could pretty much be the tagline for this phone entirely; sounds unbelievable but it's real.

My strong feeling is it's only a matter of time before Samsung figures out how to incorporate an S-Pen stylus into this form-factor, in effect turning it into a giant Galaxy Note. I'm assuming the main challenge against this right now is the still-delicate nature of the display. At the end of the day, in order to fold the way it does it has to be soft - which is why you're presented with a long list of warnings about how to look after it when you're setting up the Z Fold2. Although not mentioned specifically, I'm pretty sure poking at it with what is essentially a sharp stick is definitely not recommended at this time.

It's certainly a wonderful device for watching video on. Yes, there's still a visible crease through the middle of the main display but you don't notice it at all when a movie's playing. The sound from the stereo speakers is excellent, although on the next generation I'd like to see the introduction of a quad-speaker array as found on Samsung Tab S-series tablets - that'd really blow people's socks off.

I'm confused by the 4500mAh battery - not the biggest around by far. My confusion is based on the fact I've found battery life to be great, with plenty of juice still left in the tank each night, even when consuming a lot of video content on that big ol' screen. Fast charging is an option as is wireless, no water/dust resistant IP rating here though - that really would be a major breakthrough.

Sorry for the long-winded review but as you can see, there really is a lot going on here and most of it isn't just excellent, it's the best it can possibly be. I'd argue no phone could ever truly be worth $3,399.00 but I'd also argue no other phone can do what this phone does. If nothing else it's an attention-grabber and a talking point - definitely plenty to talk about.