How much are you prepared to pay for a better oral hygiene solution?

Now, before you answer, take a moment to really think it through. If there was a way to significantly reduce all those mouth nasties we don't like to think about; plaque, tartar, bad breath, yellow teeth... surely that means less time at the dentist, right?

And less time at the dentist means more money in your pocket - that's just basic economics. When I read that, I assumed it was a typo but no, that is indeed what some retailers have been selling it for, although there are some pretty drastic specials around if you stop and do a bit of comparison shopping.

What you're dying to know is; what could this brush possibly do that others don't?

Actually, as it turns out, a few things. 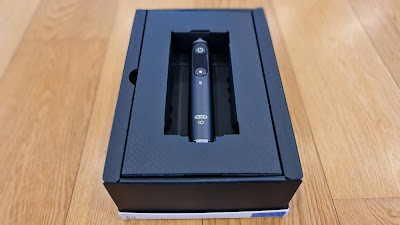 Firstly, there's no doubt the Oral-B iO 9 Series is a premium personal appliance. From the thick, printed cardboard packaging to the weight and solid feel of the device itself, everything seems well thought through and extremely durable. Oddly, this isn't always the case with bathroom accessories. When you're surrounded with water and hard, slippery surfaces, you'd think more items would be built to look and feel as good as this does.

The matte finish makes the brush easy to hold, even when wet. The heads slide on and off easily, yet stay securely in place. And while the black colour may not be everybody's cup of tea (not very patriotic of you if it isn't) believe it or not, you can customise the LED ring that lights up around the collar of the brush to the colour of your choice - but more on that stuff later. 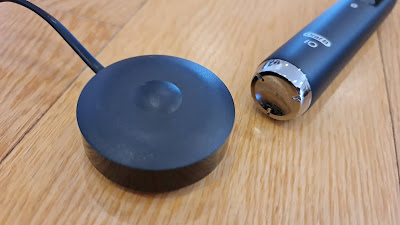 My other main gripe is the size of the head. Compared to other electric and sonic brushes I've used before, the stem between the body and the brush seems quite a bit thicker and it took me a few days to get used to jamming it in my gob without the urge to gag. Maybe I don't have a very big mouth, although I've been reliably informed I have... on multiple occasions. I do worry if you have a more petite puckerer, you might struggle with this one.

Although, it's probably worth the struggle because other than visiting the dentist, my teeth have never felt cleaner than after the very first time I used the iO 9 Series. Yep - right from the first time. You know that sensation you have after the dentist, when your teeth are suddenly super smooth and you feel as though you can almost run your tongue through the gaps between each tooth? Like that. 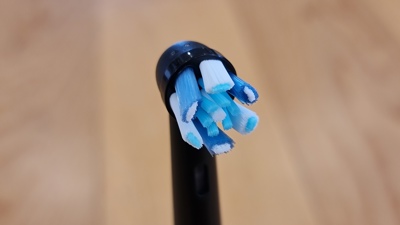 To achieve this, it seems Oral-B has combined several technologies to create the ultimate brush head; from the unusual twisted bristles with their "high-density tuft-in-tuft" configuration, to the quiet-yet-powerful linear magnetic drive, to the fact it doesn't just oscillate, or rotate, or vibrate - it does all three. 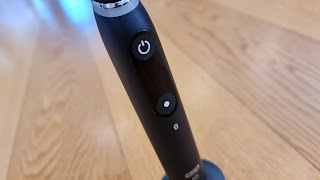 There are only two controls on the brush, with these you can choose from a wide selection of brushing intensities - from a gentle tongue clean right up to... well... INTENSE. This ultimate setting is kind of brain-rattling - in a good way - and this is where the iO 9 Series really starts to smarten up.

Over-brushing is a real issue - even with manual toothbrushes. People can damage gums and enamel if they get too carried away and brush too hard over time. The iO 9 Series senses this and the LED indicator flashes to let you know if you're getting too into it so you can immediately lighten up.

Like most electric brushes, the iO 9 Series guides you through a two-minute routine, pausing briefly every 30 seconds to remind you to move on to the next quadrant. Unlike other brushes, it'll keep going after two minutes until you switch it off - although by that stage you will have earned yourself a nice, friendly smiley-face on the colour screen.

Oh, didn't I mention this brush has a full-colour display? And you thought it was expensive.

The screen is actually pretty useful - you can track your progress with the quickest of glances in the bathroom mirror. It also shows you a precise readout of your battery level. This is important, because battery-life on this thing isn't great. Ironically, that's probably due in no small part to the fact it has a colour screen on the handle! Maybe I'm being overly critical here - Oral-B reckons you'll get up to two weeks on a full charge but I like to brush three times a day and I'm struggling to get through one full week. Not an issue if you've got the power-point space to leave it plugged in and on the stand - it's designed to be used this way and won't over-charge the battery. 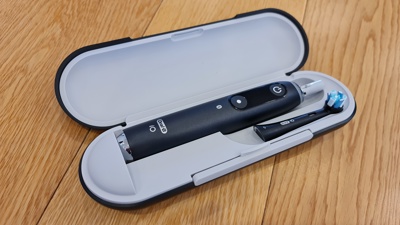 There's also a pretty fancy travel case included in the box, with its own power cord. You get a spare head too, so two people can share the same device if you like, keeping both heads in the included stand with a lid. Interestingly, there are no other accessories - no specific tongue-cleaning, denture or braces heads. Perhaps this is a one-head-fits-all solution - I don't have braces or false teeth so I'm not sure.

But if simply being a really amazing toothbrush isn't quite enough to justify its expense, maybe all the built-in AI is.

I've used brushes that connect to apps before but nothing anywhere near as comprehensive as this. The Oral-B iO app isn't just a way to log the frequency and duration of your brushing, although it will do that without you even having to ask it to. It has an incredibly well designed, guided brushing routine, with easy-to-follow graphics that leave you in no doubt exactly where you have and haven't brushed. This is why you can keep going past two minutes - which, let's face it, is just an arbitrary number we've all signed up to for some reason. There's no point brushing the inside of your back left molars for the full two minutes and then stopping, right?

With the iO app, you can clearly see when to move on and where to. There's a selection of challenges to target things like fresh breath, whitening and gum care. These incorporate prompts to floss or mouth-wash as well as just brushing.

The app will remind you to charge your brush or replace your heads and yes, there are medals to be earned, if that's your thing.

All of this makes one of life's most mundane tasks more challenging, rewarding and yes, possibly even a little bit fun. Certainly achieving that "post-dentist' feeling in your own bathroom is amazing and if it leads to less actual dentist time, perhaps the iO 9 Series won't take as long to pay for itself as you might think.