Before you read on, you should know I'm far from unbiased when it comes to reviewing Huawei devices. In fact, I've hosted promotional videos on behalf of Huawei, showing off new handsets and explaining how to use them. I've been paid to do that - but more importantly, I've been happy to do that.

But what makes a great phone great? Can a phone still be great without Google services?

Huawei aren't paying me to write this review, by the way. Despite that, I've been using the latest P-series flagship and it's definitely great. 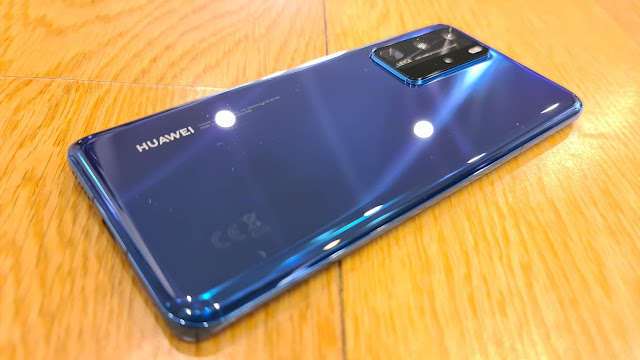 I mean, just look at at it. The Huawei P40 Pro comes in Silver Frost or Deep Sea blue, as pictured above. The 6.58-inch Quad-Curve Overflow display doesn't just curve at the sides, it curves top and bottom too. It looks like liquid and feels like liquid to use. There's a noticeably silky smooth response, thanks to the 90Hz refresh rate and the mighty Kirin 990 processor - that means dazzling graphics and sheer speed and power. Every time I pick up a Huawei handset after using one made by someone else, I'm always impressed at how damn quick it is and the P40 Pro is certainly no exception. You'll notice this straight away with the blazing fast in-display fingerprint sensor - now more conveniently located towards the centre of the device. Personally, I prefer to use face unlock, especially when it works as reliably and as efficiently as it does on this phone. 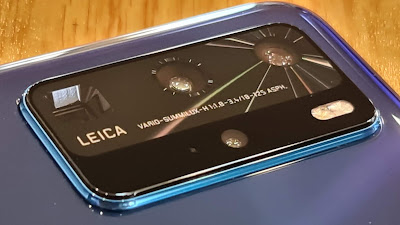 Now it wouldn't be a P-Series phone if it didn't have a top-notch camera setup and again, the P40 Pro lives up to Huawei's usual high standards. The 50 MegaPixel Ultra-Vision Leica camera doesn't just take extraordinary photos, unlike the bulky, unsightly three and four-lens modules we've seen clumped onto the back of other flagship devices recently, the P40 Pro camera has an elegance to it; it's more compact and doesn't protrude out any further than it needs to. You've got the 50MP wide angle lens, the 40MP ultra-wide, the 3D depth-sensing camera and the real star of the show; a 12MP SuperSensing telephoto lens, capable of crystal clear 5X optical zoom. Not to mention a primo 32MP selfie-cam, tucked subtly away in the top left corner of the screen (bottom left when gaming or watching movies) As for the pictures...

The P40's camera AI is now named Golden Snap - and gold-class pics are definitely what you end up with. Take my advice and let the AI do the work for you, I haven't been let down yet. This is probably the best flower photo I've ever taken - not that I'm super into flowers or anything - but all I did was pull the phone out of my pocket and let the AI do the rest. The colour, the light, the split focus... that's all the phone's doing, I didn't even have to think. Which I love. I hate thinking. Even if things do go a bit wrong, the P40 can fix a lot of them after you've taken the shot. AI Best Moment provides you with a selection of optimal shots so you never miss a critical pic. AI Remove Passersby magically erases unwanted photo-bombers from your background and AI Remove Reflection is the easiest way to clear up those problematic window shots.

And now for the contentious bit; the software. I've got to be honest with you; if I have to read another Huawei review that writes off an otherwise outstanding, world-class phone just because it doesn't come with Google Play Services installed, I'm going to throw something at someone. It's typical of the current tech market to become so reliant on whatever is the most publicised, advertised and hyped product that we end up ignoring other options completely - or worse, dismissing them without even making an honest attempt to use them in the first place. Admittedly, at first I was just as guilty, desperately trying to force my usual browser and calendar apps to work on the latest Huawei phones. Then I had an epiphany; if they can make a handset this good, who's to say Huawei can't come up with a few decent apps too?

Let me remind you, yet again, how easy it is to set this phone up. Clone Phone will transfer the vast majority of your stuff across from your existing handset in minutes; files, photos, contacts, apps and settings - yes, including Facebook, Messenger and Instagram. This now happens faster than ever due to the P40 Pro's WiFi6+ capability. Even then, the Huawei App Gallery is expanding exponentially every day. Just because you're used to using a certain app doesn't mean there isn't a better one out there you should try. Huawei's native browser looks great, it's fast, you can browse privately and there's no issue streaming video and other graphic-heavy content. Best of all, it has a dark mode. Turns out, there are all kinds of calendar apps out there, many with far better features than what I was using before. All the Microsoft Office apps run perfectly. Not to mention all your classic time-wasters; Snapchat, Tiktok etc... Everybody raves about the HERE WeGo navigation app - that's on the App Gallery too. Thousands and thousands of apps waiting for you to give them a go.

There are only two small niggles I have run into. Although the P40 Pro has full NFC capability, there's no contactless payment option and try as I might, I can't get the push notifications to come through from my security cameras, even though I can control and monitor them via their apps with no problem at all. Given Huawei's obvious commitment to making their handsets the best in the world, I'm confident issues like these will be solved not too far down the track.

This is a sleek, classy-looking phone with a superb display and a powerhouse of an engine under the hood. Battery life is outstanding, wireless and reverse charging is all part of the package, as is IP68 water and dust resistance. There isn't a flagship feature this phone doesn't have. Amazing camera performance (as usual). Thousands of apps ready for download - SO GIVE THEM A GO!

The P40 Pro is only RRP$1499... and that's not including the roughly $650 of accessories you get thrown in when you pre-order from 2 Degrees, PB Tech, JB Hi-Fi or Noel Leeming. There is simply no other flagship device with these kinds of specs available for this price.

No wonder Emirates Team New Zealand has made the Huawei P40 series its official smart device partner. You see? It's all about excellence in design, the latest innovation and trying something new.

That's what the Huawei P40 Pro is all about.

Click here for more information on the Huawei P40 Pro.