It's official. I'm a convert. Robot vacuums are the future. In fact, in my house, they're the present and after trying a few I can no longer go back.

Friday used to be vacuuming day for me. That meant I'd get home from the supermarket (yes, also supermarket day) only to have to then spend the best part of an hour vacuuming. Don't get me wrong; I'm a gadget addict - so I've had some pretty whizzy vacuum cleaners over the years. In fact, my house has a central vacuum system installed that I've never even used.

Still, that's an hour of my Friday I could be doing something much more enjoyable with. Like sleeping. Or melting cheese on things.

So having a vacuum cleaner that can operate itself, on a schedule of my choosing... well now I have that hour back. Or do I?

As fun as it is to not actually do the vacuuming, over time I've discovered not all robots are created equal and there can certainly be a bit of maintenance required. Brush heads need to be detangled and even auto-emptying robot vacuums seem to get clogged on a pretty regular basis.

As for mopping, this usually means fitting then removing a special pad or head - those pads then need cleaning or perhaps they're disposable. Either way, things can end up a bit of a mess and suddenly you're wondering if all this fuss is really easier than just doing the floors yourself. 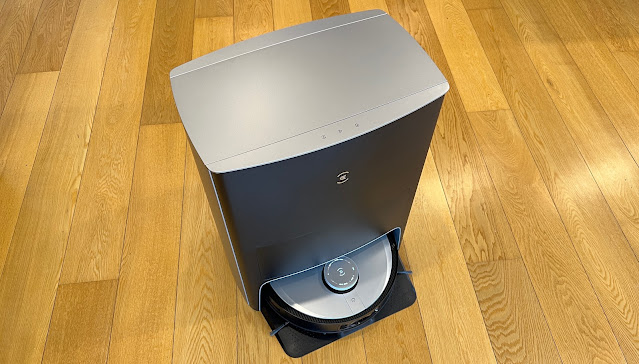 The people at ECOVACS seem pretty excited about their latest and greatest, the DEEBOT X1 OMNI.

Right off the bat, it's pretty striking due to its larger-than-ever auto-emptying station - this is the OMNI part of the equation and it's big, bigger than most kitchen rubbish bins. If you don't have anywhere to put it, this may be more robot than you can handle. Oh, did I mention you can only set it up on a hard floor?

Luckily for me, a large part of my home has wooden floors and I've found a spot just large enough to stash it. The jury's still out from the Domestic Manager if it's allowed to stay there. What's working in my favour is ECOVACS brought in the Jacob Jensen design team to give the X1 OMNI a Danish minimalist makeover. So rather than some stark, white, utilitarian box in the corner you have a classy, matte silver and black box in the corner. It's a talking point anyway. 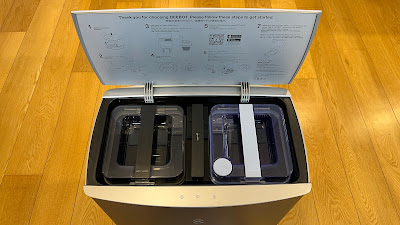 Of course, there is a reason this Deebot has been upsized; it now fills its own water tank and washes and dries its own mopping pads. Yes, you read that right. The OMNI Station houses two large water containers, one for clean, one dirty. Both of these are simple to remove, fill, empty and reinstall and it genuinely does mean you no longer have to muck around with wet, dirty mopping pads.

I didn't really believe it until I saw it in action - not that there's that much to see. However you can hear water being pumped into the tray at the base of the OMNI Station so the twin mopping pads (yes, there are two now) can rinse themselves out. That dirty water is sucked away and warm air is then circulated through the pads to dry them out.

What's more, the X1 knows when the pads need a clean and will automatically return to the OMNI Station for another rinse-off mid-mop. 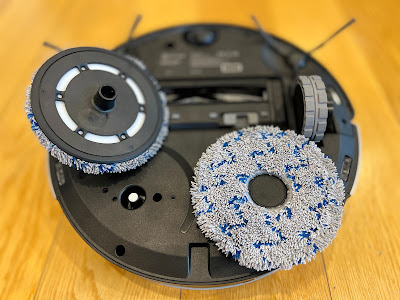 The only downside to all this is you still have to manually attach or remove the mopping pads yourself - the X1 won't go near carpet if they're in place. Some other robot vacuums have a mop-raising configuration to deal with this and perhaps a future DEEBOT will too. Mind you, the X1's unique OZMO Turbo 2.0 rotating mopping system is vastly superior to any I've used before. Because the twin mop-heads protrude slightly from the rear of the device, they do a much better job of getting into tight spaces and corners - like around chair and table legs.

It's not all about mopping obviously. ECOVACS has made plenty of other advancements on the vacuuming side of the equation too. The X1 now sucks at a whopping 5000Pa - up from 3000Pa on the Deebot T9+. 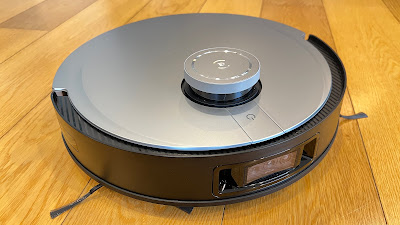 While the X1 uses the same TrueMapping technology as its predecessor to create a virtual plan of your home on its first run, you now have the option of "Quick Mapping" - this means the X1 does a super-fast run around the house without cleaning it so you can then bring up the map on the ECOVACSHOME app and edit it if need be, merging, splitting and naming rooms or adding virtual no-go areas. In my case, I have quite a few floor-level windows and a wide set of bifold doors we like to leave open when it's hot. Obviously the X1 thinks outside is just another room it can't get to through those windows and I'd rather not have it bobble through the bifolds out onto the deck. The app helps you sort these things out right from the start.

The X1 also boasts "AI computing power and an astrophotography-grade RGB camera" as part of its AIVI 3D avoidance system. Of course, that's just advertising speak for clever programming and a built-in camera. But it works. If you're whipping up a storm in the kitchen, the X1 will see you there and politely come back later. Better still, you can log into the app remotely and have a look through the camera - even tasking the robot to patrol your house if you like.

This is not Oscar-winning footage but it's definitely useful enough to see if you left that door open or to check on your pets. You can even talk to your pets via the app if you really want to freak them out. 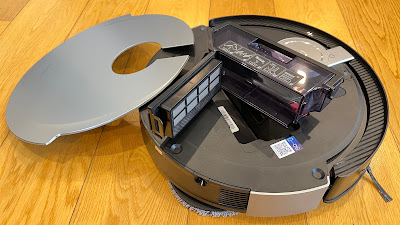 The auto-emptying capabilities of the OMNI Station are also a major improvement. I have two cats, a dog and people with hair living in my house and previously that's meant a lot of clogging - not just for robot vacuums but any vacuum. Since I've been using the X1 I haven't had to go near the dust bin or floating main brush at all. Very impressive.

Less impressive is YIKO, ECOVACS debut attempt at their own voice assistant. You can still use other assistants for simple commands like starting and stopping vacuuming but YIKO has a wider vocabulary. You can ask YIKO to do quite specific things; clean the mopping pads for example or even find out how much life is left on consumables like the side brushes. One small problem though; I couldn't get YIKO to answer me. Not at first anyway. In theory, you simply say, "Okay YIKO" and the robot responds to let you know it's listening for your command. I must have spent ten minutes repeating the words, "Okay YIKO" again and again. I read the app from cover to cover. I Googled it. I even left a message on the ECOVACS help desk.

Then... well then I tried accents. Sure enough, by applying a bit of method acting and imagining myself working in the DEEBOT factory, I finally got YIKO to listen to me. Not the end of the world given all the X1's functions are available through the app and there are even a few controls on the OMNI Station itself. However, if you want your X1 to utilise its "Follow My Voice" functionality, you'd better start learning how to speak DEEBOT.

I have no doubt YIKO will become more refined and more useful in future updates and I also have no doubt this is the most full-functioned and autonomous robot vacuum I've tried yet. I've been using it for weeks and still haven't got my hands dirty once. Best of all, I now have most of my Fridays back. Now if only I could send a robot to do the shopping...