The woman who says she was forced to sleep with Prince Andrew when she was a teenager claims that she "had to keep him happy".

Virginia Roberts Giuffre says she was a trafficking victim made to have sex with the prince when she was 17 - and is asking the British public to support her quest for justice.

Giuffre told the BBC Panorama show, in an interview broadcast in the UK on Monday evening (Tuesday, NZT), that people "should not accept this as being OK".

She told how Andrew was "the most hideous dancer I've ever seen in my life" and "his sweat was ... raining basically everywhere".

Giuffre's interview took place before the duke's appearance on Newsnight.

She describes how she says she was trafficked by notorious sex offender Jeffrey Epstein beginning in 2001 and made to have sex with Andrew three times, including once in London.

Andrew, 59, has categorically denied having sex with Giuffre and apologised for his association with Epstein, who died in prison in August in what New York City officials said was a suicide.

He has stepped down from royal duties "for the foreseeable future" because of his friendship with Epstein and the allegations of sexual wrongdoing with an underage girl. Prince Andrew and Virginia Roberts, aged 17, with Ghislaine Maxwell at her townhouse in London in 2001. Photo / Supplied

He tried to contain the damage by giving a televised interview on the topic, but it backfired in part because he did not express concern for Epstein's victims.

In the TV interview, Giuffre says she danced with Andrew at a London nightclub before having sex with him.

"It was horrible and this guy was sweating all over me," she said. "His sweat was like it was raining basically everywhere, I was just like grossed out from it, but I knew I had to keep him happy because that's what Jeffrey and (his girlfriend) Ghislaine (Maxwell) would have expected from me." 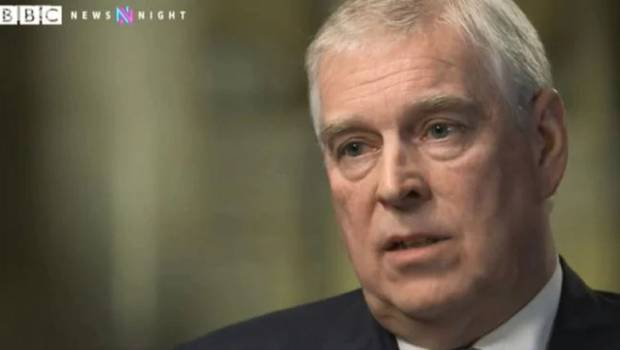 "That just made me sick," Giuffre said.

In his recent interview, Andrew said he had never met Giuffre. He said he had a medical condition that prevented him from sweating.

He said he had no memory of a photo - showing him with an arm around Giuffre in the Epstein house - being taken and questioned whether it was his own hand in the image.

Giuffre told Panorama: "The people on the inside are going to keep coming up with these ridiculous excuses (about the photo).

"Like his arm was elongated or the photo was doctored, or he came to New York to break up with Jeffrey Epstein. I mean, come on, I'm calling BS on this, because that's what it is.

"He knows what happened. I know what happened and there's only one of us telling the truth, and I know that's me."

In response to the Panorama interview, a Buckingham Palace spokesman said the Duke "unequivocally regrets his ill-judged association with Jeffrey Epstein" and "deeply sympathises with those affected who want some form of closure".

They said "it is emphatically denied that The Duke of York had any form of sexual contact or relationship with Virginia Roberts. Any claim to the contrary is false and without foundation".

The palace has also stated that any suggestion of impropriety with underage minors by the duke was 'categorically untrue'.

Epstein was a wealthy financier with many powerful friends. He was in prison on sex trafficking charges when he died.

The scandal is one of the worst to have gripped the royal household in recent decades.