Mt Maunganui beachgoers could be forgiven for thinking a UFO or a flying ship was hovering above the waters last week when an optical illusions left locals stunned.

Bay of Plenty resident Monika Schaffner was travelling through Mt Maunganui on April 21 when she looked out the over the ocean and saw what looked like a large object hovering in the sea.

What she thought was a flying ship was actually a mirage on the horizon.

"I filmed this optical phenomenon that made a ship look like it was floating in the air.

"It was like seeing something unreal. I thought my eyes are playing a trick on me," she told the Herald.

"I had to ask my partner if he sees the same as me. So I asked him to pull over so I could take a photo." 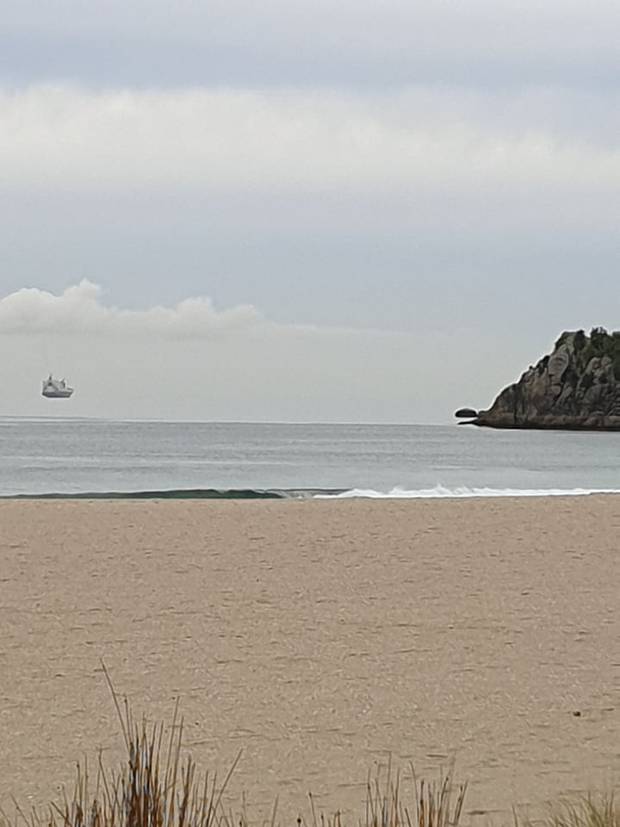 An incredible optical illusion has shown a huge cruise ship appearing to hover over the horizon. Photo / Monika Schaffner / Supplied

What Monika filmed is a unusual phenomenon called a "Fata Morgana".

A Fata Morgana is a complex form of superior mirage that is seen in a narrow band right above the horizon.

It appears when a layer of warm air sits on top of a layer of cold causing the light from the ship to bend as it passes through the air gaps.

It is most common when the sun sets over the ocean.

The phenomenon can distort objects to make them appear bigger or smaller than they are, or sometimes upside down.

Monika's footage has since gone viral around the world, with viewers watching the illusion from as far away as the US, UK and Australia.