Oprah Winfrey has appeared on CBS to give intriguing new insights into her explosive interview with Prince Harry and Meghan as the network revealed new unseen footage.

The TV host said she did not know the identity of the royal who the Duke and Duchess of Sussex said raised concerns about Archie skin colour before his birth — but she said she knew it was not the Queen or Prince Philip.

Oprah said that even she was surprised that Meghan and Prince Harry told her about the comment.

"[Harry] did not share the identity with me but he wanted to make sure that I knew and if I had an opportunity to share it that it was not his grandmother [the Queen] nor his grandfather [Prince Philip] that were a part of those conversations," she said as she appeared on CBS This Morning the day after the sensational interview.

"He did not tell me who were a part of those conversations," she added, saying she tried to get an answer both on camera and off.

Meghan had revealed in their chat that before the birth, she learnt that the Palace didn't want her and Harry's son, Archie, to have a royal title or security detail, and it appeared to be an issue of race.

CBS also revealed new footage in which Prince Harry said that the Queen had invited him and Meghan to Sandringham to talk and stay overnight after their decision to leave as working royals in January 2020. But he said the invite was abruptly retracted and he was told the monarch was "too busy".

Oprah said that was "such an important story" but her team had needed to edit the three hours and 20 minutes down to an hour and 25 minutes. She believed the most important question was: "Why did they leave?"

She said the stories about the Queen being "blindsided" by their exit were "very damaging to them and also very hurtful" because there had been "months and months of preparation" before they moved to Canada.

She noted that the Queen even said this in a January 2020 statement.

"There are people surrounding the family who are advisers to the family who have been there a long time and that's part of the hierarchal structure and those people have a lot of influence and input," she said.

Harry said that after the Queen invited the couple to Norfolk, her secretary got in contact to say she was "busy all week". He said he rang the Queen and she confirmed her diary had filled up.

"I didn't want to push because I kind of knew what was going on," he said.

"Doesn't the Queen get to do what the Queen wants to do?" Oprah asked.

"No, when you are head of The Firm there's people around you that give you advice and what has also made me really sad is that some of that advice has been really bad," Harry replied.

In another unseen clip, Oprah asked Harry if he left the UK because of racism.

"It was a large part of it," Harry said. He said a media insider at a fundraising dinner for his Sentebale charity had told him: "Please don't do this with the media, they will destroy your life. You need to understand the UK is very bigoted."

"I stopped and I said, 'The UK's not bigoted, the UK press is bigoted, specifically the tabloids, is that what you mean?'" Harry said he asked.

"And he goes, 'No the UK's bigoted'. And I said, 'I completely disagree', but unfortunately if the source of information is inherently corrupt or racist or biased then that filters out into the rest of society." 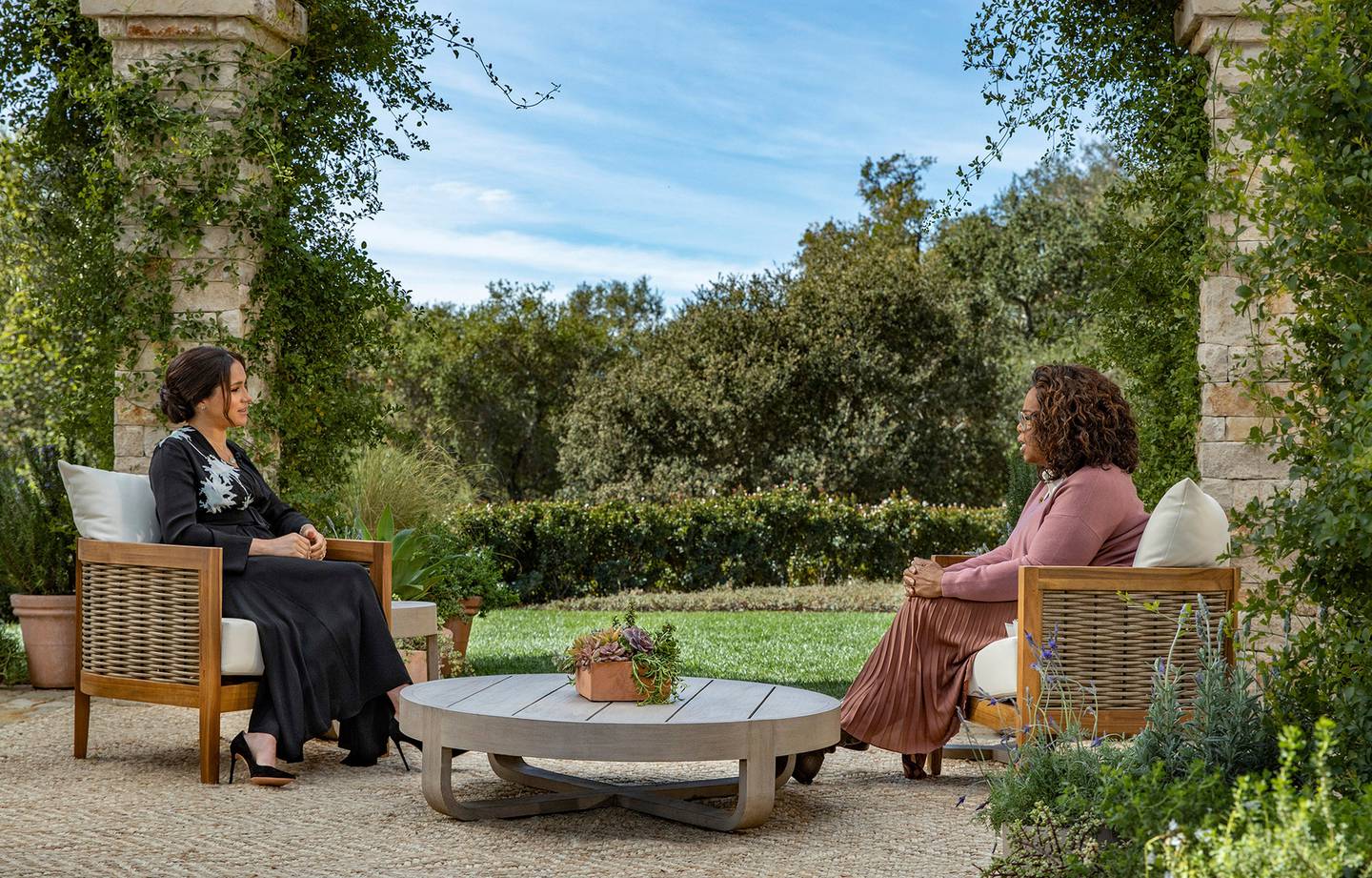 Meghan revealed the racial issue at the heart of her feud with the Royal Family. Photo / Supplied

Oprah said she sat down with the couple beforehand to talk about their intention for the chat.

"I think they agreed to do it, wanted to do it, were ready to do I because when you have been lied about for a series of years, I think anybody you can understand this if in your own office or in your own family, somebody is saying things about you that are not true and how hurtful that is. or if you're online and you read the comments from something that somebody has said about you and you continue to see those comments, how hurtful that is."

"Imagine that over a period of months and years, and you know that it isn't true."

Asked why they would give a high-profile interview when they say they want privacy, Oprah said they wanted "not to be intruded upon". 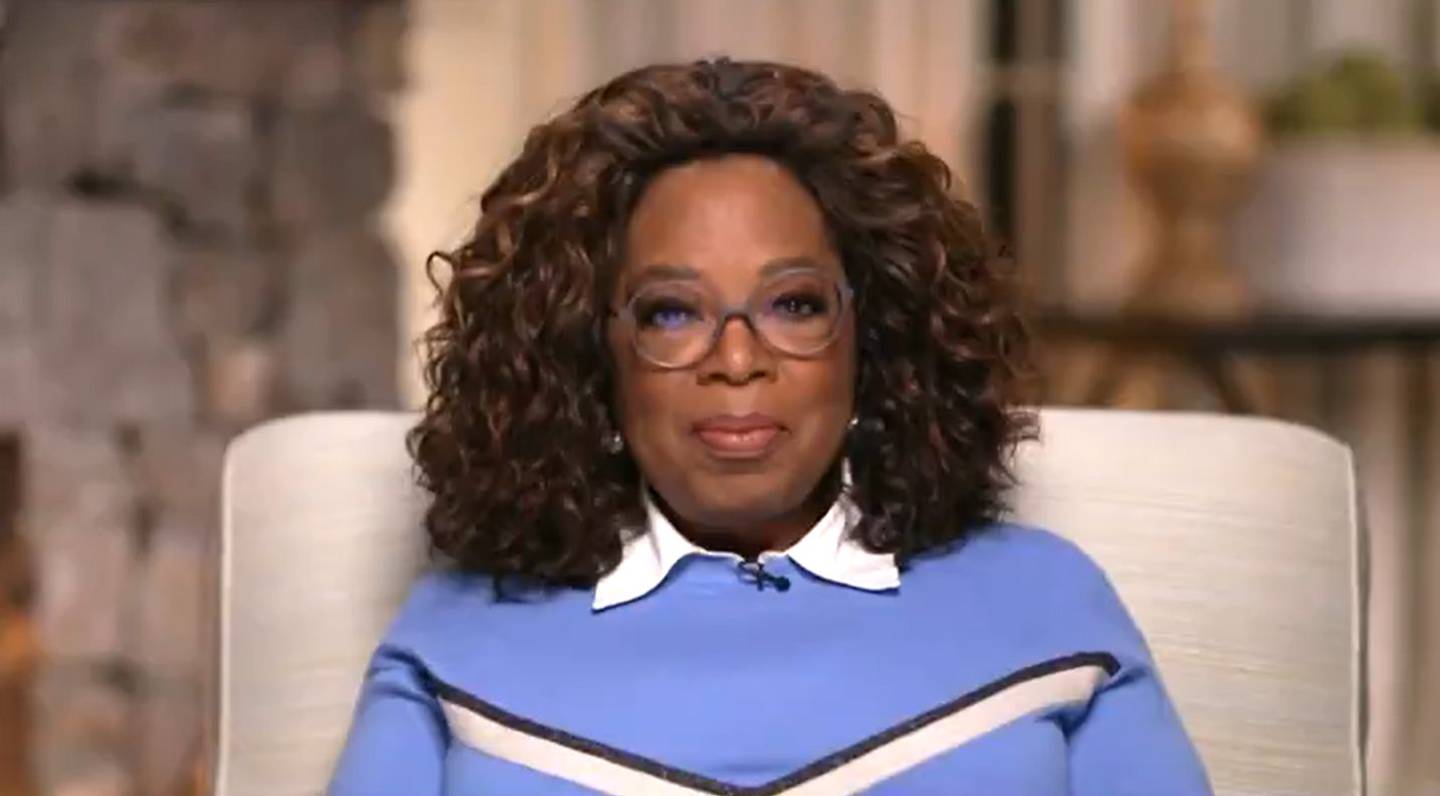 The talk-show host, who is a neighbour of the couple in Montecito, California, said that no one wants people outside their home filming their child.

Prince Harry, 36, said that "sadly" no one in the family had apologised for the fact that he and Meghan, 39, felt they had to leave.

"The feeling was that this is our decision therefore the consequences are on us.

"And despite three years of asking or help and seeing or visualising how this might end, it was … it's been really hard because … I am part of the system with them, I always have been.

"But I guess, I'm very aware of this, my brother can't leave the system, but I have."

Asked if Prince William wanted to leave, Harry said he did not know and couldn't speak for him.

"But with that relationship and that control and that fear from the UK tabloids … it's a toxic environment."

Oprah asked: "Does your father think it's a toxic environment or relationship?"

Harry replied: "No, I think he's had to make peace with it."

The Duke of Sussex said he "will always be there" for his brother and his family.

Oprah asked why Harry and Meghan couldn't make peace with it. The Duchess said it was "different" because of race, her American nationality and social media.

"That was like the Wild Wild West," she said. 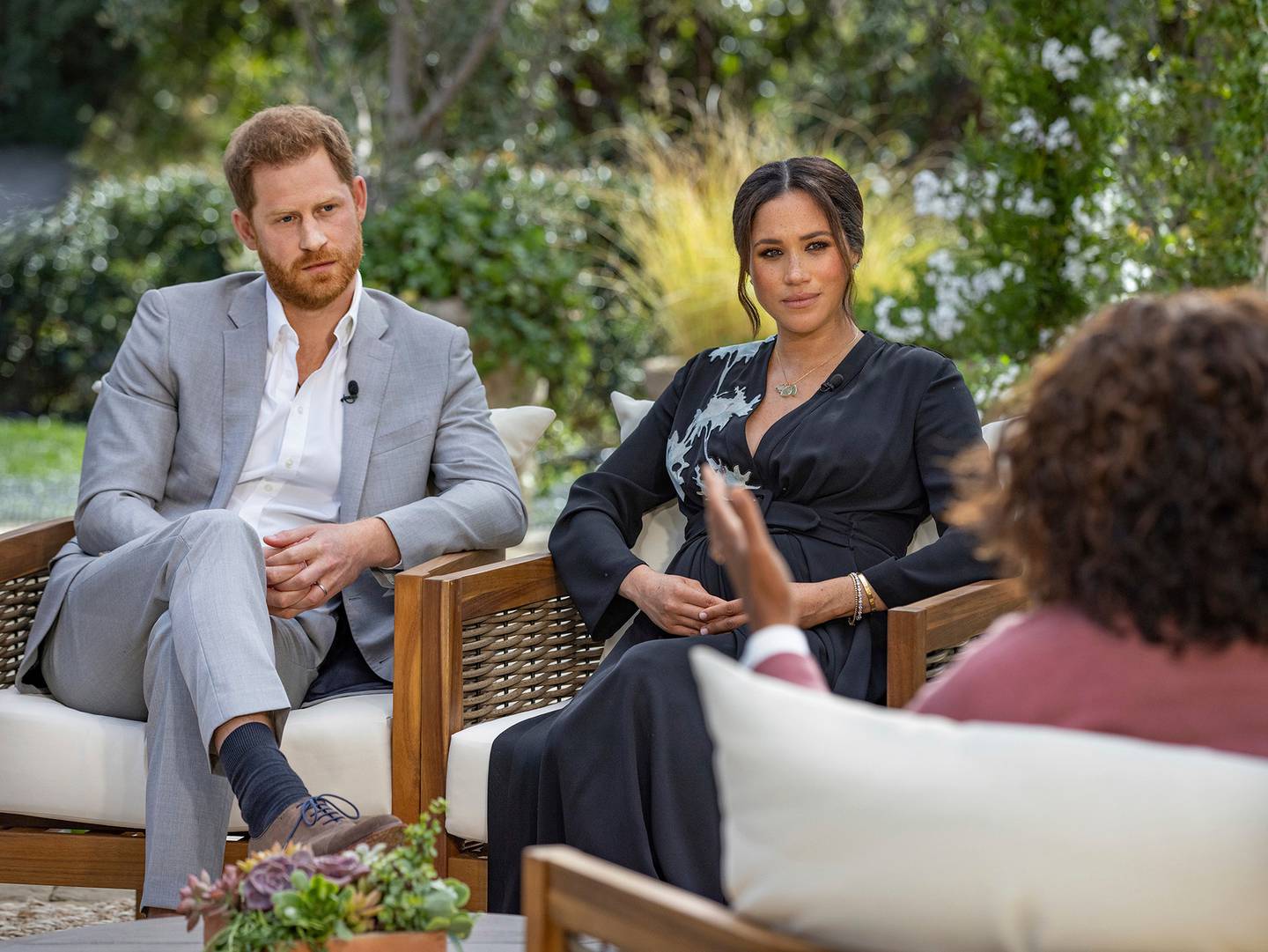 The interview was the biggest royal television moment in a generation. Photo / Supplied

She said the situation was compared to the media attacks on Kate Middleton, who was dubbed "Waity Katie" by the press before she and Prince William married.

"Kate was called Waity Katie, waiting to marry William, while I imagine that was really hard and I do ... this is not the same and if a member of his family will comfortably say we've all had to deal with things that are rude. Rude and racist are not the same," Meghan said.

"I thought that was very powerful," Oprah told CBS This Morning. She said she thought Meghan was "gracious" over the comparisons between two situations.

Meghan added that normally a press team goes on the record to defend that person, adding: "That didn't happen".

Meghan also tackled the issue of her father, Thomas Markle, in another previously unseen clip from the CBS interview. The interview was packed with revelations on the dysfunctional family. Photo / Supplied

Thomas Markle spoke to the press about her before the wedding (which he did not attend for health reasons) and handed them a private letter she wrote begging him not to speak to them.

"If we're going to use the word betrayal it's because when I asked him [he denied it]," she said.

The Duchess said the tabloids had the story earlier but decided to hold it until just before the wedding because "they wanted to create drama".

"They don't report the news, they create the news," she said.

"We called my dad and asked him and he said no, absolutely not," she added, explaining that he had denied speaking to media.

Meghan said she told her father that "the institution can kill the story" but the favour might not be repeated, meaning she and Harry might not be able to protect their children one day.

"I just need you to tell me. And if you tell me the truth, we can help," she said she told him.

Meghan said the behaviour of her father "resonated especially as a mother".

"I'm talking about your grandchildren," she said. "I genuinely can't imagine doing anything to intentionally cause pain to my child, I can't imagine it so it's hard for me to reconcile that."

She said that "everyone has accountability", adding that "they hunted my mum down" but her mother had "remained in silent dignity for four years watching me go through this."

"I think it would be very hard to tell all when you don't know me," Meghan responded.

"I mean, this is a very different situation than my dad, right? When you talk about betrayal, betrayal comes from someone that you have a relationship with. I don't feel comfortable talking about people that I really don't know.

"I grew up as an only child, which everyone who grew up around me know. And I wished I had siblings. I would have loved to have had siblings, that's why I'm so excited to be pregnant, so Archie has someone.

"It's really interesting. I mean the last time I saw her must have been at least 18, 19 years ago? And before that, 10 years before that."

"So y'all weren't close, you didn't grow up together. She doesn't really know you," Oprah says.

"No. No, she changed her last name back to Markle in – I think she was in her early fifties at that time – only when I started dating Harry," Meghan replied. "So I think that says enough."

• CBS presents Oprah with Meghan and Harry will broadcast on Three on Tuesday, March 9, at 7.30pm.