Boasting 70 miles of shoreline, 33 beaches and over 260 days of sunshine, San Diego’s coastal curves carry a siren-like pull. After taking in the big town sights, I scooted across the Coronado Bay Bridge to the eponymously named “island” which is actually a peninsula. Coronado Beach is one of San Diego's most picturesque thanks to its powder white sand and sparkly blue water. Home to the US Navy’s almighty Pacific fleet, don’t be surprised to see Nay SEAL teams and other military units conducting training runs on the beaches in these parts. Notoriously difficult to snag a park, Ocean Boulevard is your best bet for free parking. Backdropping the beach the red conical towers and wedding-cake white trim of the historic Hotel Del Coronado. 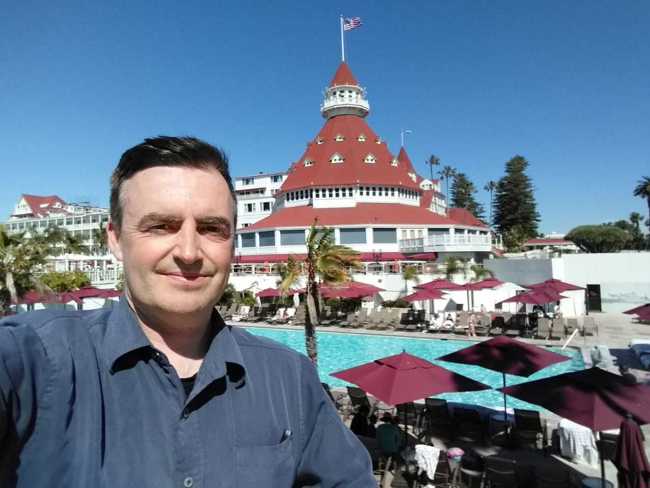 Affectionately nicknamed “The Del”, the hotel’s Victorian gingerbread architecture have set the stage for a host of movies, political summits, and extravagant social happenings. Supposedly, the Duke of Windsor first met the Duchess of Windsor Wallis Simpson here. Its illustrious movie resume is headlined by Some Like It Hot, shot on-location, starring Marilyn Monroe, Jack Lemmon, and Tony Curtis. Open since 1888, peruse the History Gallery for some illuminating insights on its grandeur and rich pedigree with the glitterati. When it opened, The Del was the biggest hotel west of the Mississippi. It still exudes an old-school swank, an exuberance, albeit in a more selfie-conscious age.

After taking in this grand dame, I headed north to La Jolla, pronounced La-HOY-ya, probably best described as San Diego’s Riviera. This well-heeled seaside community of 30,000 relishes its sense of place. This jewel-like coastal bolthole instantly sweeps you up, strung above San Diego’s most photogenic stretch of coast. Glitzy restaurants, exclusive boutiques, elegant antiques stores and meticulously maintained parks sum up La Jolla. As does its architectural tone, unmistakably Mediterranean, with a heavy reliance on arches, palm trees, colonnades, pale stucco and red-roof tiles. The hub of La Jolla is known as “the Village” which is perched on a bluff lapped by the Pacific. A casual, colourful haunt for lunch is The Promiscuous Fork.

There is no real rhyme or reason to their menu, a fusion of flavours spanning Hawaii, Mexico, smokehouse BBQ, and the spicy southwest. I highly recommend the Lamb Lollipops, cajun dusted lamb cutlets, grilled and topped with a balsamic-hoisin reduction. Under bluebird skies, the sun-drenched coastline was begging for exploration, so I followed the 1km long bluff-top walking path that wraps its way above the shoreline, west of the Village. By Boomer Beach, the rock pools played host to hordes of sea lions, hollering, hooting and languidly sun-bathing in the warm spring afternoon, while pelicans looked on with indifference. The camera-worthy views just kept being served up as I made my way to Ellen Browning Scripps Park.

The park is named in honour of the newspaper heiress who moved here in 1897 and pioneered much of its fashionable development. Just beyond the park is La Jolla Cove, a shimmering blue-green gem of a beach, surrounded by cliffs and supremely popular for snorkelling. Beyond the bone-white sand, water visibility is at 30-plus feet, and the bright-orange Garibaldi fish soon come into view. For more soft adventure, I staked out the La Jolla Caves, close to the cove. It's a walk of 145 slippery wooden steps down a tunnel to Sunny Jim, the largest of the caves in La Jolla Cove and the only one reachable by land. This is a one-of-a-kind local attraction is a man-made tunnel took which two years to dig, nearly a century ago.

Today the Sunny Jim Cave Store, a throwback to the early shop, is still the entrance to the cave. The shop sells jewellery and watercolours by local artists. If you have a head for heights, soak up the sky-high panorama from Mount Soledad, La Jolla's highest spot, scanning the city’s northern suburbs and deep down to downtown. While in La Jolla, I fostered a great appreciation for Pinus torreyana, the

rarest native pine tree in the United States. On the northern edge of La Jolla, Torrey Pines have been accorded a sanctuary, where 6000 of these unusual trees grow on the cliffs.

Battered by coastal winds, the crooked trees are often twisted into beautiful sculptural shapes resembling large bonsai. The only other place you’ll find them is on Santa Rosa Island, off the coast from Santa Barbara. The natural reserve has several hiking trails leading to the cliffs and these precious pines. The Guy Fleming Trail is the most scenic. The reserve is on the Pacific Flyway, making it a popular pit stop for migrating birds. The name Torrey Pines may also sound familiar because of its golf course, crowning the coastal cliffs. Tiger Woods won the US Open here in 2008. www.sandiego.org

I didn’t have time to swing any clubs, but I did head to the Lodge at Torrey Pines, to dine in style, overlooking the 18th hole. The Lodge’s signature restaurant, A.R. Valentien, highlights regional San Diego cuisine served in an elegant, timbered indoor-outdoor dining room. Executive Chef Jeff Jackson sources only the best local provisions, and the menu changes frequently based on seasonal fare available. The restaurant takes its name from a talented early 20th-century California artist whose works are exhibited throughout the restaurant. Dinner was superb, headlined by my choice of main, Shortrib Pappardelle. The dish comprised House Made Pappardelle, Braised Shortrib, Asparagus, Pearl Onions, Roasted Carrots & Parsley. For an appetizer, I plumped for Tri Tip Birria, an assembly of Blue Corn Tostada, Avocado, Escabeche, Cilantro, Green Onions and Queso Fresco. Divine. www.lodgetorreypines.com/ar-valentien

Where to stay? Set back from the pristine beaches and regal bluffs of La Jolla, the Grande Colonial hotel has been a hospitality landmark since 1913. Completely modernised, yet faithful to its storied past, this intimate boutique hotel is what personalised and dignified hospitality is all about. This eco-friendly 4-star hotel offers a fine-dining restaurant and a large outdoor pool. Guest rooms are generously sized, with flat-screen TVs, coffee machines, iPod docks and free WiFi. NINE-TEN Restaurant serves fresh California Cuisine for breakfast, lunch and dinner. An upscale brunch is served on Sundays, and room service is available. With a variety of accommodation options, I stayed in their ultimate “live like a local” experience, in their adjoining Little Hotel by the Sea. Just ten years older than the main hotel, this tranquil and private wing offers enhanced privacy, residential-living space with all the modern comforts of home. From my lounge window, I soaked up a California sunset to die for. https://thegrandecolonial.com/

For more trip tips on exploring California and beyond, head to the official site. www.visittheusa.com.au

Now in its 90th year of continuous service, I flew to the USA with Hawaiian Airlines. Flights depart Auckland late evening, landing in Honolulu by mid-morning, ideal for onward connecting flights to the mainland. All fares and classes include excellent meals and beverages, on-demand seat-back entertainment and a generous 64kg free checked baggage allowance. (2 bags x 32kg per piece.) Hawaiian Airlines flies onward from Honolulu to 13 U.S mainland destinations, including San Diego. Book directly at www.HawaiianAirlines.co.nz