The Duchess of Sussex will apparently never call the UK home again, according to a source close to the royal.

As the Queen and royal family rush to deal with the aftermath of Harry and Meghan's shock admission that they are stepping down as senior members if the family, it looks like the Duchess is keen to stay as far away as possible - for good.

The source revealed to the Daily Mail that Meghan has no interest in raising her son among the chaos:

The insider also claims that the ex-actress was "miserable" living in the UK after the birth of her first child.

They also noted that she was not only having difficulty adjusting, she also wasn't sleeping and began having "anxiety attacks about her future."

Less than a week after Prince Harry and Meghan released their statement that they would be stepping back from their roles, the royal family began working overtime to come up with a solution to please all parties.

"We have chosen to make a transition this year in starting to carve out a progressive new role within this institution," the couple shared in the post.

"We intend to step back as 'senior' members of the Royal Family and work to become financially independent while continuing to fully support Her Majesty The Queen. It is with your encouragement, particularly over the last few years, that we feel prepared to make this adjustment.

"We now plan to balance our time between the United Kingdom and North America, continuing to honour our duty to The Queen, the Commonwealth, and our patronages," they continued. "This geographic balance will enable us to raise our son with an appreciation for the royal tradition into which he was born, while also providing our family with the space to focus on the next chapter, including the launch of our new charitable entity."

"We look forward to sharing the full details of this exciting next step in due course, as we continue to collaborate with Her Majesty The Queen, The Prince of Wales, The Duke of Cambridge and all relevant parties," they said. "Until then, please accept our deepest thanks for your continued support."

Following the statement, the Queen released a response on Monday, sharing her support for Prince Harry and Meghan. 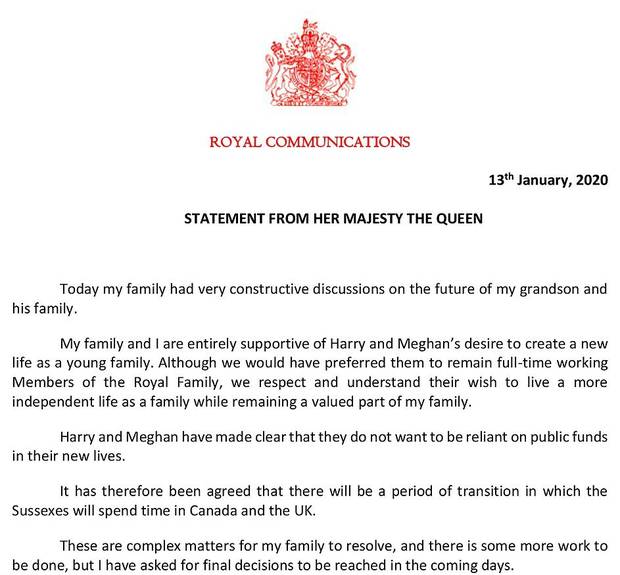 The official statement released by the Queen on Monday. Photo / Royal Communications