Meghan Markle has reportedly refused to speak to her estranged father Thomas ever again, after his most recent interview outburst.

According to The Sun, the Duchess of Sussex has decided to permanently cut ties with her dad after his countless public betrayals, and she has no intention of letting Markle ever see his grandson Archie Mountbatten-Windsor, who is nearly 4-months-old.

"It's a terribly sad situation but Meghan has made the very difficult decision that she doesn't have an active relationship with her father any more," a source told the publication.

"It's obviously heartbreaking for her but she has to protect herself, her husband and her son. 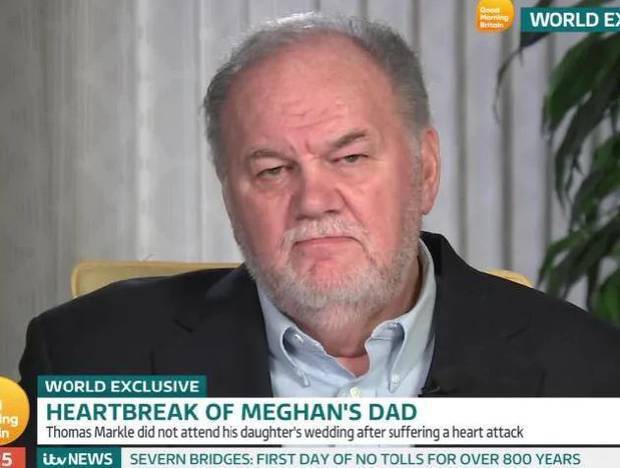 Earlier this week, Thomas Markle told the Mail On Sunday he has been completely cut out of his grandson Archie's life.

He described the whole ordeal as "abuse", while calling out Meghan, 38, and son-in-law Prince Harry, 34, for not sending him a photo of his grandchild, the newest member of the royal family.

Speaking out for the first time since Archie's birth, Thomas Markle said the only photos he has seen of the little boy are those uploaded online.

Markle told the Mail On Sunday: "I would like them to send me a picture of Archie so I can frame it and put it on my wall beside the one of Meghan.

"Isn't that what any grandfather would want?

"I'd love to know if he's got the famous Markle nose."

The former Hollywood lighting director also claimed he sent Meghan a card through her financial advisor in Los Angeles, but he received no response.

Thomas Markle is well-known for his endless interviews about his conflict with his daughter Meghan and son-in-law Prince Harry.

He missed their royal wedding - and the chance to walk his daughter down the aisle - last year after allegedly suffering two heart attacks. He was not invited to Archie's christeningeither.

He also fell out with his daughter and Harry when he admitted posing for paparazzi pictures in a misguided attempt to change his image.