Prince Harry and Meghan Markle exchanged an awkward "hello" with Prince William and Kate today as they carried out their last public royal duty before they walk away from the monarchy, at the Commonwealth Service at Westminster Abbey yesterday.

The Duke and Duchess of Sussex walked in ahead of Prince William and Kate Middleton - the first public meeting of the two brothers and their wives since Megxit was announced two months ago - before Prince Charles and Camilla also arrived and the Queen then made an entrance to trumpet fanfare and cheers from crowds outside.

Unlike last year, Harry and Meghan were conducted to their seats at the church in London, rather than waiting for the Queen's arrival and walking through with the monarch and key royals as they did in March 2019.

Once seated, the royals' position on the chairs was based on their ranks within the family, with Charles next to the Queen due to him being first-in-line, followed by William in second, and Harry in sixth. They took similar positions last year, although Meghan was next to Prince Andrew, who has since stepped down from royal duties. 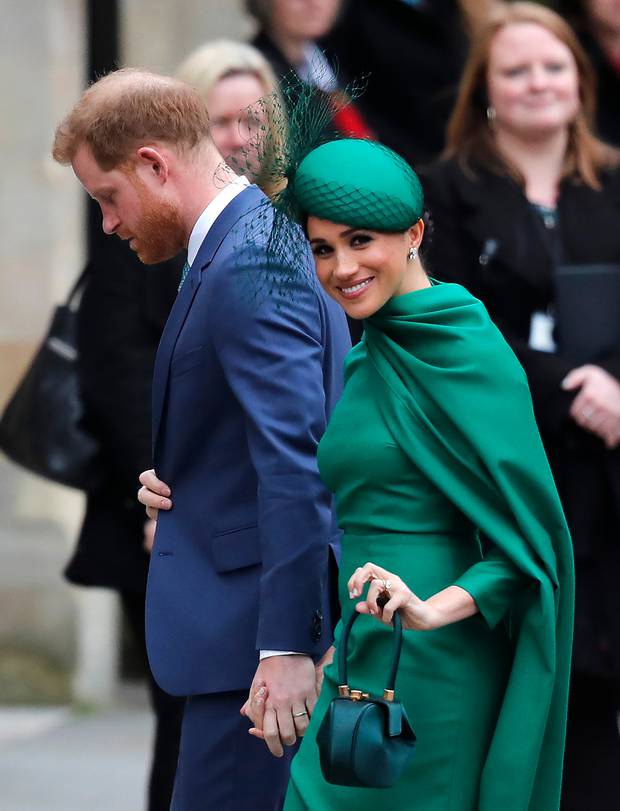 Meghan was seen to mouth "hi" and give a small wave to William and Kate, followed by a
"hello", as the Cambridges took their seat in the High Altar. Harry also said "hello" and smiled at his brother. It comes after Harry admitted last October that he and his brother are on "different paths" and have good and bad days in their relationship.

Foreign Secretary Dominic Raab and Labour leader Jeremy Corbyn and his wife Laura Alvarez were other guests, along with Home Secretary Priti Patel, Leader of the House of Commons Jacob Rees-Mogg and US Ambassador Woody Johnson, who gave another guest an elbow bump in the wake of the coronavirus.

It also emerged today that last-minute changes were made to the royal arrangements, meaning Prince William and Kate, who were due to join the Queen in the procession, were also conducted to their places.

A source said the amendments were made yesterday, despite the Order of Service already having been signed off and printed. Kensington Palace and Buckingham Palace have not commented on why the switch has been made.

The Sussexes this year arrived after the Earl and Countess of Wessex, who were the first senior royals to walk in and were also escorted to their seats. The move signifies their impending exit from The Firm - dubbed Megxit.

From March 31, the monarch's grandson and American former actress Meghan will no longer use their HRH styles as they pursue a new life of personal and financial freedom, mostly in North America. 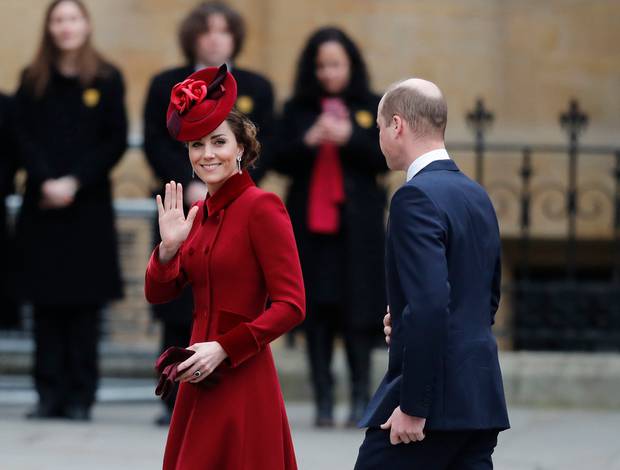 Prince William and the Duchess of Cambridge arrive to attend the annual Commonwealth Day service at Westminster Abbey in London. Photo / AP

The procession included Charles and Camilla, William and Kate, clergy, Mr Johnson and the Commonwealth Secretary General, among others.

The Duke and Duchess of Cambridge arrived soon after Meghan and Harry and like the Sussexes were introduced to a group of dignitaries before being shown to their seats.

The Prince of Wales and Duchess of Cornwall arrived at the Abbey ahead of the Queen who - as head of state - is always the final member of the congregation to arrive.

Meghan was seen to mouth 'hi' and give a small wave to William and Kate, followed by a 'hello', as the Cambridges took their seat in the High Altar in the row in front of the Sussexes.

Harry also said 'hello' and smiled at his brother. Edward partly rose to greet the Cambridges, but Sophie and the Sussexes remained seated.

Meghan later chatted animatedly to Edward as they waited for the Queen to arrive, with Harry joining in the conversation and putting his arm on the back of Meghan's chair as he did so.

As the members of the royal family arrived they were introduced to a line of dignitaries, including Boris Johnson, but no-one shook hands as they greeted each other.

It is understood the Queen and other senior royals were following the protocol the Abbey has been operating under during the past few days due to the coronavirus outbreak.

Meghan was in a green ensemble by New Zealand designer Emilia Wickstead with asymmetrical cape and hat by William Chambers. Kate was in red, wearing a coat by Catherine Walker and a hat by Sally-Ann Provan. Prince Harry and Meghan, the Duchess of Sussex arrive to attend the annual Commonwealth Day service at Westminster Abbey in London. Photo / AP

Camilla wore a navy silk and lace dress and coat by Bruce Oldfield and a navy feathered hat by Philip Treacy, while Sophie was in a white and navy Suzannah dress and navy Jane Taylor hat.

As the royal procession of clergy, the PM, the Queen, Charles and Camilla made its way to the altar, Kate and Sophie curtsied in sync to the Queen, while Meghan followed later with a deep curtsy for the monarch, and another for the Prince of Wales.

World heavyweight boxing champion Anthony Joshua spoke eloquently about his Nigerian and British heritage and how his background reflected many in the Commonwealth.