For months they've been plagued by rumours of a royal rift.

But there was certainly no proof of any feud between Meghan Markle and Kate Middleton as they arrived at Wimbledon to watch Serena Williams in the ladies final.

The sisters-in-law were all smiles in the Royal Box, with the Duchess of Cambridge's sister Pippa also joining them to watch Williams take on Romania's Simona Halep.

The royals were snapped smiling and chatting as the match got underway, despite the alleged bad blood between them and their husbands.

The outing marks an important milestone for royal watchers, as it is the first time the Duchess of Cambridge and the Duchess of Sussex have embarked on a public outing without other royals in tow since they last sat together at centre court in 2018. 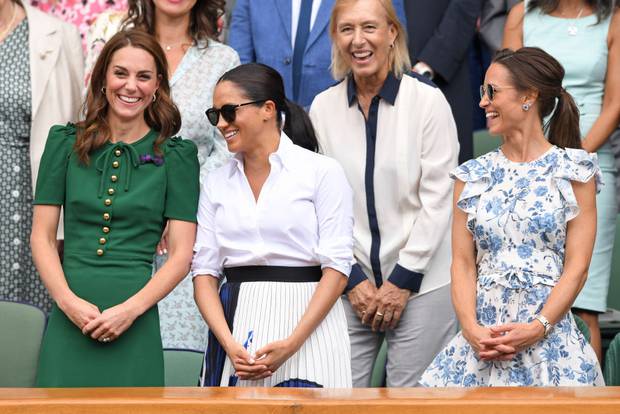 Three musketeers: Kate, Meghan and Pippa appeared to have a good time in the Royal Box. Former tennis champion Martina Navratilova was seated behind them. Photo / Getty

The latest Wimbledon outing comes after months of frenzied speculation of a royal feud between the Cambridges and Sussexes, following reports the woman formerly known as Meghan Markle left her sister-in-law "in tears" after Princess Charlotte's bridesmaid dress fitting in the lead up to her lavish 2018 wedding.

But then reports suddenly shifted, and soon began to indicate the true feud was actually between William and Harry and not their wives.

That conflict allegedly began after elder brother William questioned the speed of his younger brother's relationship — and the duo, who have always been famously close, have rarely been seen together for months. There have been reports of a feud between the two royals since Meghan married Harry, but they put on a chummy display for the cameras. Photo / Getty

On occasions when they are seen together in public, their body language appears strained, with many royal watchers pointing out William's tense expression in the family's photo following baby Archie's recent christening.

However, there seems to have been a recent push to dispel those rumours, and to put on a happy and united front.

Earlier this week, Meghan and Kate enjoyed a day out with their respective children to watch their husbands at the King Power Royal Charity Polo Day, with both appearing relaxed and happy.

And at Wimbledon, the royal wives seemed even more chummy, repeatedly leaning in to chat to each other and laughing regularly.

Photos taken during the match show two women who seem to be truly comfortable in each other's company — and many royal fans believe it could be a clue that the so-called royal rift might be coming to an end, and that it is time to bury the hatchet. 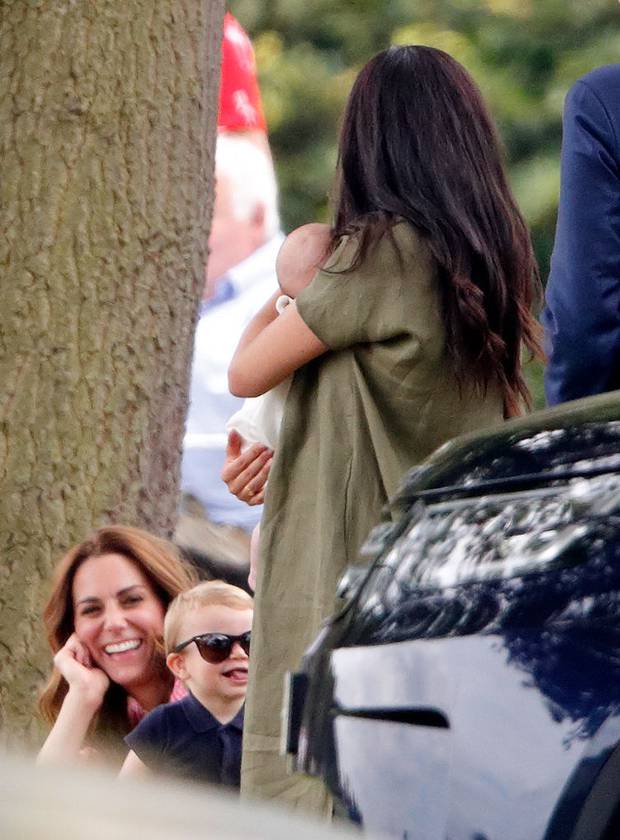 The two duchesses had been seen at a polo match just a few days before where Prince Louis was photographed pulling his tongue out at his aunt. Photo / Getty