A well-known Australian anti-vaxxer has taken down her social media accounts after posting a disturbing photo of her family online.

Sarah Mills, a mother of three from regional NSW with a collective following of more than 100,000 across Instagram, TikTok and Facebook, posted the images to her accounts as Greater Sydney came out of lockdown yesterday.

In the photos, she can be seen smiling with her children while wearing yellow patches in the shape of the Star of David. A proud symbol of Judaism, a version it was infamously used by the Nazis to identify Jewish people and mark them as an "enemy of the people".

Where the Nazi patches had the word "Jude" (German for Jew), Mills wrote "no vax" before attaching the stars to her and her children's T-shirts.

"As of today I may no longer enter restaurants, cafes, theatres, cinemas, concerts, museums, sporting events, pools, clothing stores or anything deemed non-essential," she wrote in a caption. 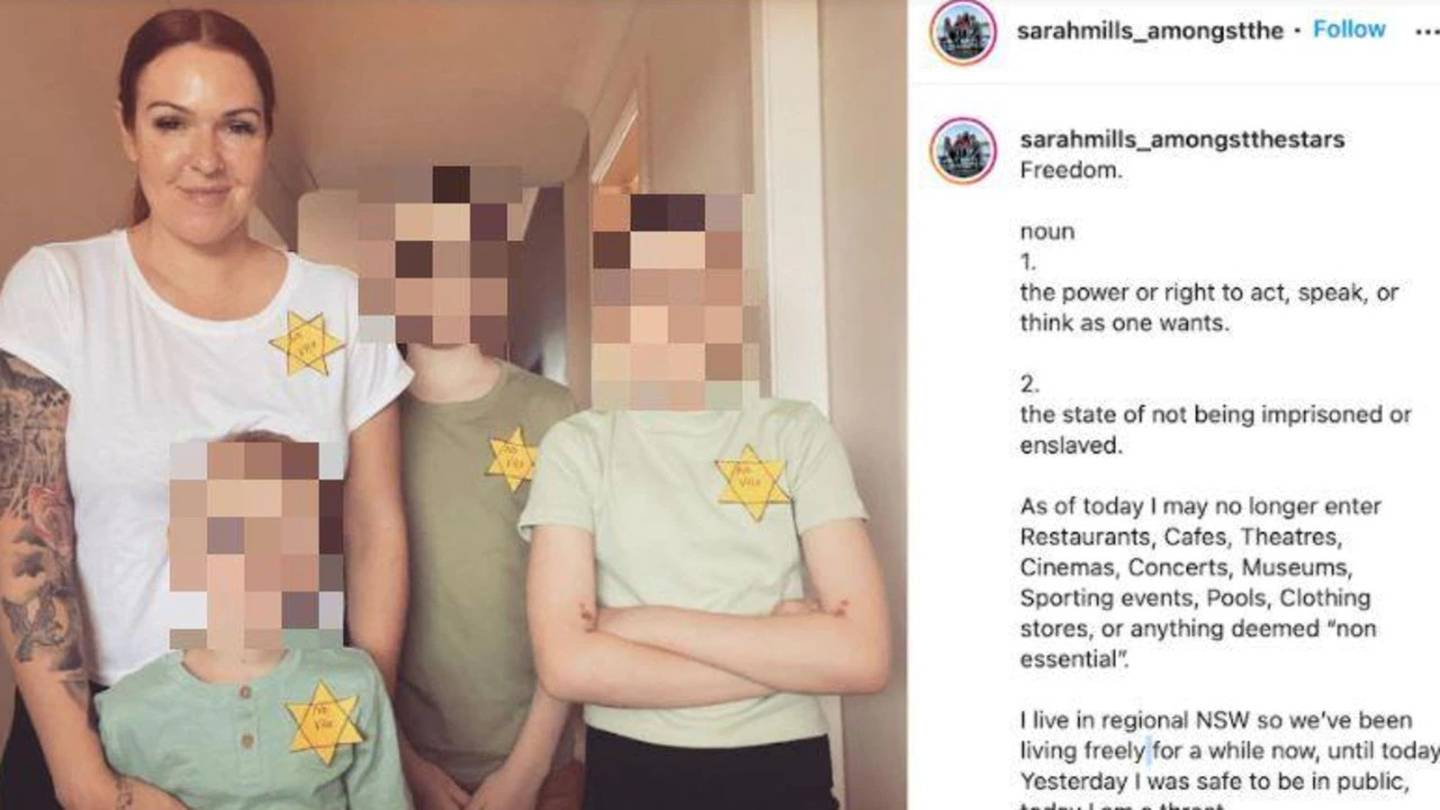 "I live in regional NSW so we've been living freely for a while now, until today. Yesterday I was safe to be in public, today I am a threat."

Alluding to the Star of David in the image, she went on to say that "history was repeating itself".

She compared the NSW government's reopening plan to the treatment of Jews under Nazi rule.

"This is NOT our freedom day," she wrote. "This is history repeating our mistakes, and if you've wondered what you would have done in the past, take note because you're doing it now."

In another image posted yesterday, she can be seen wearing striped pyjamas similar to the Jewish inmates in the Nazi death camps.

The image was captioned: "Prisoner 385968 reporting for duty"

It appears that Mills has taken down all of her social media accounts. However, the images have been screenshotted and shared around by members of Australia's Jewish community.

They have reacted with horror to what they have seen.

Dr Dvir Abramovich, chairman of the Anti-Defamation Commission, a leading civil rights organisation said the images were "beyond ugly and offensive", and that they were a "trivialisation and debasement of the Holocaust".

"While Sarah Mills is certainly entitled to express her strong views about the actions taken by state governments in response to the Covid-19 outbreak, it is beyond outrageous to compare them to the monstrous laws enacted by Hitler's Third Reich," he said.

"Nothing in Australia matches or even comes even close to the indescribable atrocities carried out on an industrial scale by Hitler.

"For Ms Mills to use her children and to exploit the infamous yellow star that Jews were forced to wear by the Nazis during the Holocaust to first identify, then dehumanise and ultimately murder them, simply in order score a political point about mandatory vaccination is outrageous and abhorrent."

He said that wearing the yellow stars shows an ignorance what really happened in Nazi Germany, and he called on Mills to apologise and to "stop coarsening the debate".

"Such foolish equations demean the murder of millions of Jews and others and are historically inaccurate and extreme." 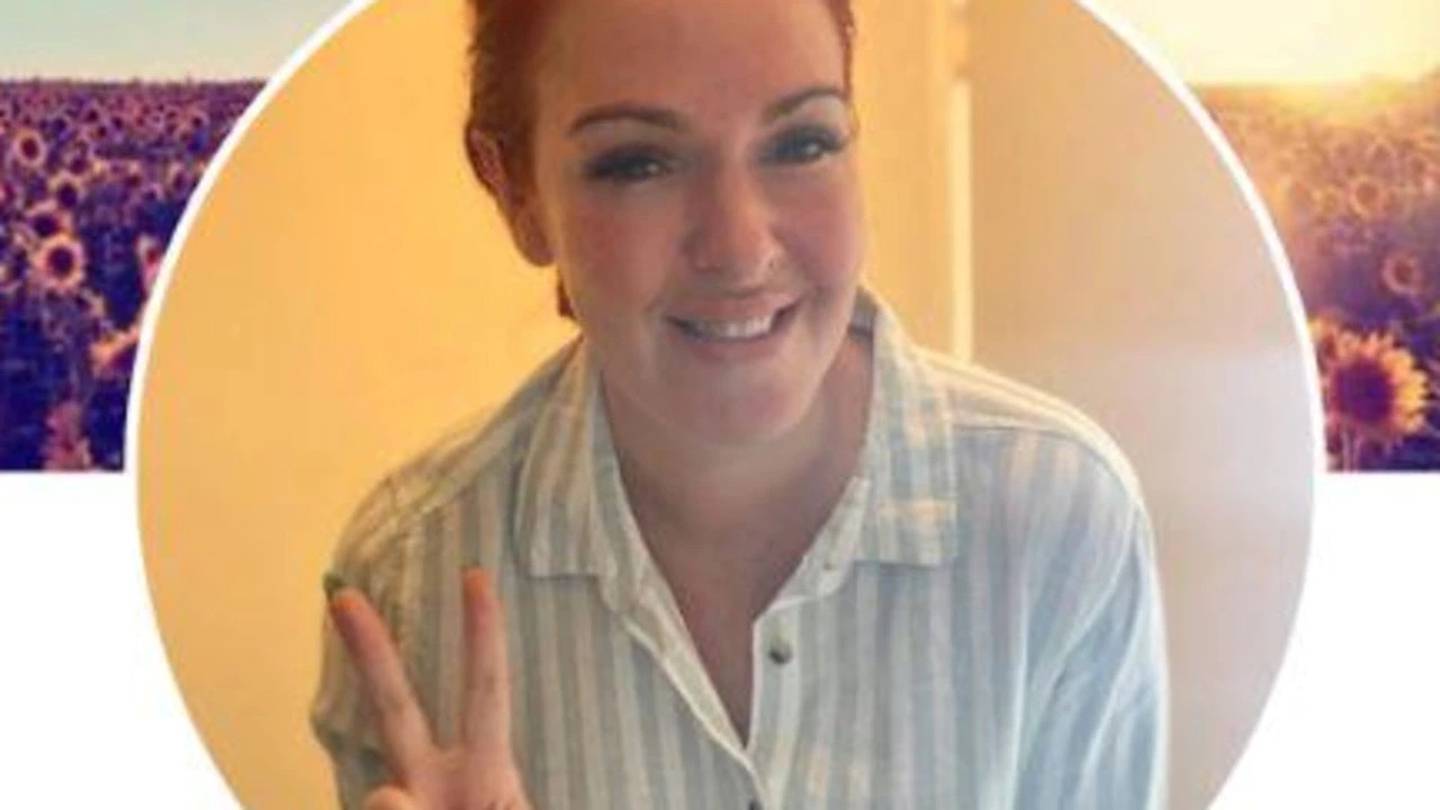 In another image Mills is wearing striped pyjamas similar to the Jewish inmates in the Nazi death camps.

Abramovich also said that the conduct was disrespectful to the Diggers who fought against Nazi Germany as well as Holocaust survivors.

"Perhaps if she met with a Holocaust survivor, she would understand how wrong she is."

Her social media pages are down, but on her website Mills describes herself as a single mum of three who has been "relentlessly bullied online" for her views.

"I'm opinionated and outspoken but I firmly believe that everyone is entitled to their own opinion and we should simply support that we all make our own choices in life," she wrote on the site.

On the website she has a "wall of shame" where she posts images of those who have tried to "bully her into silence".

Despite the opposition to Covid-19 vaccines from some parts of the community, NSW is on course to become one of the most vaccinated jurisdictions in the world.

Leaked figures show a massive surge in the number of vaccinations in the state this week — meaning it is now very likely that NSW will hit its 80 per cent target by the weekend, with more rules to ease on Monday.

A Channel 9 reporter shared figures on Tuesday that show 75.23 per cent of adults in the state are now fully vaccinated and 90.77 per cent have had one dose. 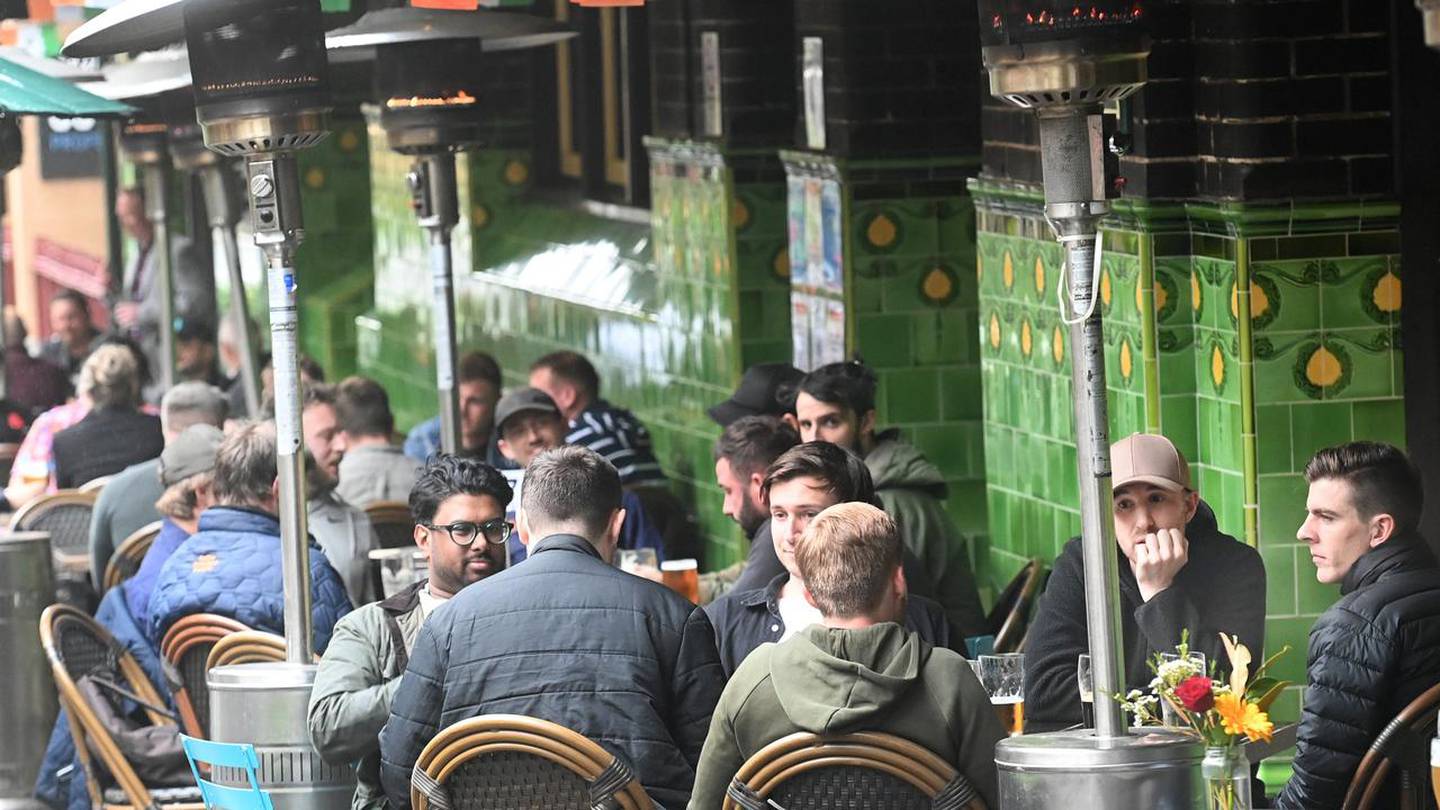 NSW is becoming one of the most vaccinated jurisdictions in the world. Photo / NCA NewsWire

The figures show an impressive 1.26 per cent daily increase in jabs, meaning it is now very likely the state will hit 80 per cent over the weekend — a critical milestone that would allow crowds back in stadiums and nightclubs across the state.

The timing is significant because Premier Dominic Perrottet said he was unlikely to move the goalposts for reopening when the 80 per cent fully-vaccinated milestone is reached — which means that if NSW doesn't hit the milestone by Monday, residents could be waiting another two weeks for restrictions to ease.

If the target is met on Monday, October 18 or later, road map rules stipulate more changes can't take place until the following Monday, which is October 25.

From the Monday after NSW hits the 80 per cent double-dose vaccination target, eased restrictions will allow those who are fully vaccinated to have up to 20 people visit their home and participate in community sport.