Charles, Camilla, William and Kate could soon be the new "fab four" after the royal couples recently shared their first joint outing in nearly nine years.

Stepping out in the UK's Leicestershire, Prince William had a turn at wheelchair basketball after an invitation from Major Les Reid who "loaned" the Duke his wheelchair to shoot some hoops.

Prince William then shot and missed three times, and father Charles joked that he would console his son when he missed the baskets.

The Duke even lovingly placed his hands on his son's shoulders during the jovial banter.

The pair appear to have grown closer since Prince Harry and Meghan's swift departure after announcing they were stepping down as senior royals. 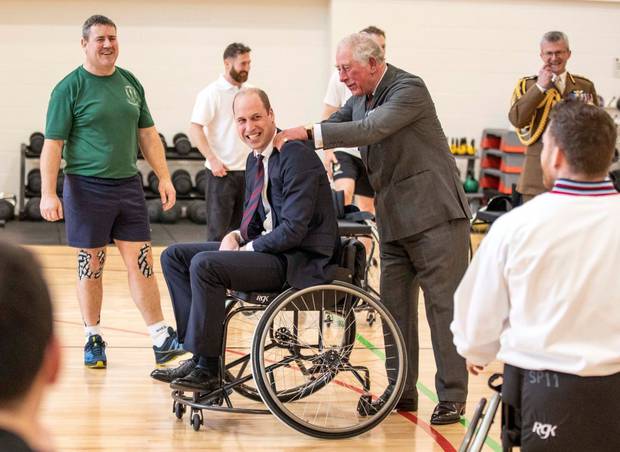 The Duchess of Cambridge also put on a display of unity, dressing in a striking black military-inspired Alexander McQueen skirt and jacket and continuing to appear a pillar of support to the Queen.

The Sun reported that the couples braved the rain and freezing cold temperatures to attend their official engagements together when the Queen needed their support the most.

Just hours beforehand, the Queen's favourite grandson Peter Phillips confirmed his split from wife Autumn in a statement, saying "it's best for the kids".

Her Majesty was pictured soon after wrapped up warm and putting on a brave face while boarding a train.

Royal sources have reported that William and Kate's support has been invaluable to the Queen as the family recovers from yet another scandal.

Amid the news of Peter Phillip's divorce and Megxit, the evolving Prince Andrew scandal and his ties to Jeffery Epstein are said to have pushed the Queen to her limits in recent months.