Images showing thousands of maskless Sydneysiders on the beach have left a bad taste in the mouths of many but others have defended the activity as being "safe".

The warm weather has seen many flock to the city's beaches, with two popular spots having to be closed, drawing criticism from those stuck in areas without access and amid concerns about social distancing with the state still recording more than 1000 new Covid-19 cases a day.

Health Minister Brad Hazzard defended the striking images on Saturday, declaring "fresh air is the safest place to be" after three months of locking people indoors.

"I know the media will have photographs today of people out and about, they tend to do that, but generally (the beach) is a safe place to be," he said.

"No, I am concerned about people who are not vaccinated.

Others also supported allowing people to take a dip.

"I wonder how many of those complaining about locals going for a surf/swim at the beach actually bother going there when there aren't restrictions? Most of it sounds a lot more like trying to make yourself feel better by wanting others to suffer," scientist Dr Darren Saunders tweeted.

"Going to the beach is not "giving up" on fighting Covid, it's doing one of the safest, healthiest things you can do to stop going stark raving mad in lockdown. Get a grip wowsers" Guardian journalist Paul Karp posted. adding that concerns about unequal access would be better addressed by opening outdoor pools, "not shaming people who are doing stuff they're allowed". 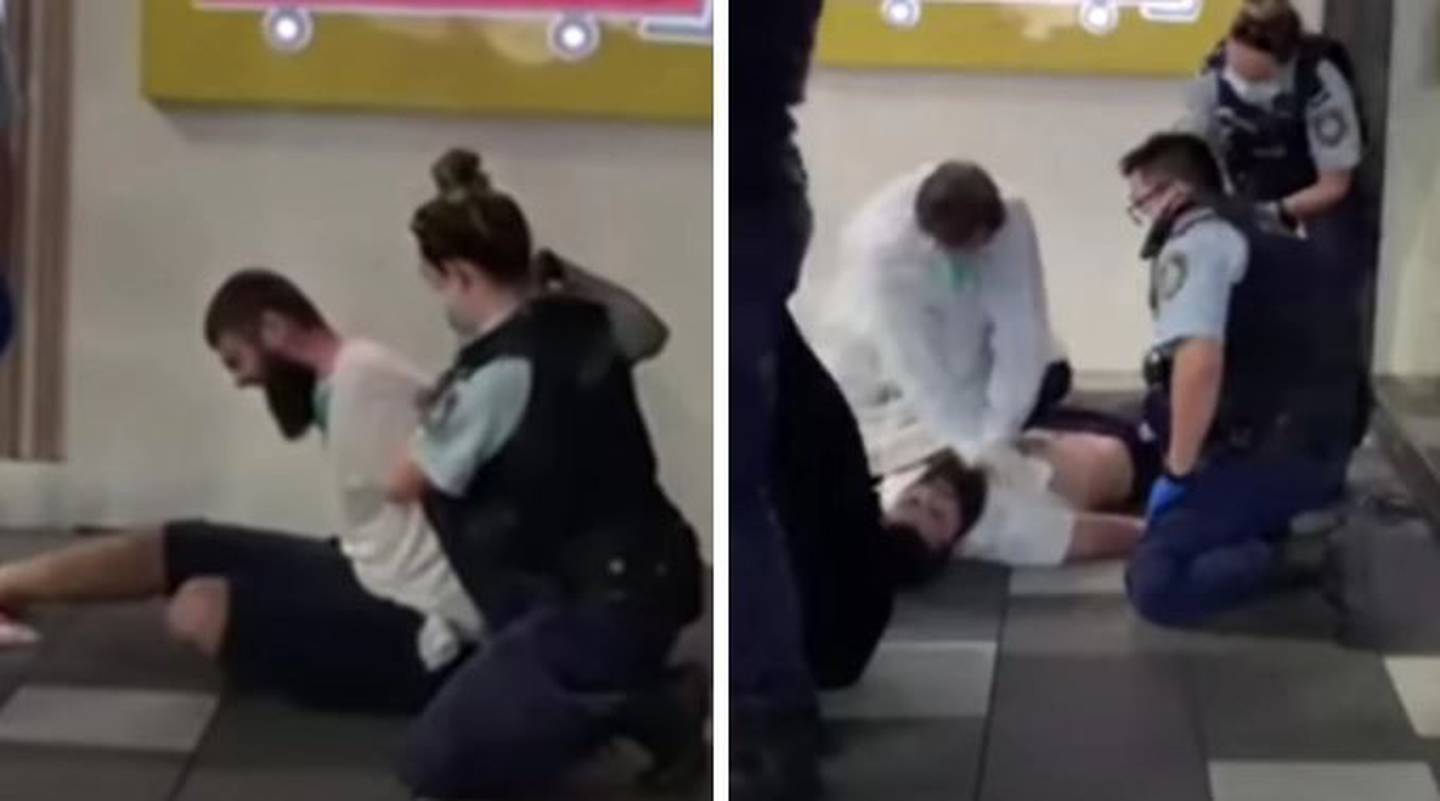 Ladkani's family were heard screaming at police that he had a heart condition, before he slumped to the ground and had to be revived with a defibrillator and CPR.

The controversy comes amid arrests in the city's western suburbs this weekend, with a man hauled to the ground by police for not wearing a mask outdoors.

Video filmed by shoppers at Bass Hill Plaza showed 25-year-old Bilal Ladkani being handcuffed on the ground by NSW Police on Friday evening.

Police say Ladkani was belligerent when they approached him about not wearing a mask. Ladkani allegedly tried to walk off saying he did not need to tell police anything. A knife was found on the man upon him being handcuffed.

Ladkani's family were heard screaming at police that he had a heart condition, before he slumped to the ground and had to be revived with a defibrillator and CPR.

He remained handcuffed throughout the 4-minute ordeal.

"The footage of someone being defibrillated while being handcuffed is some of the most distressing footage I've ever seen," defence lawyer Elias Tabchouri told Channel 7.

Ladkani was taken to hospital were he remained in stable condition. But barely a day later, scores of carefree people flocked to the golden sand at Bondi and Coogee beaches in the Eastern Suburbs, immediately raising eyebrows and prompting accusations of double standards.

"Maskless packed crowds at Bondi vs communities in red zone LGAs fined if they don't wear a mask past their letterbox."

The issue of policing certain areas with higher case numbers has once again reignited the "tale of two cities" debate, with many believing the NSW Government's measures to tackle Covid-19 have only fuelled division between the general public.

"Videos from packed maskless beaches, vs cops appearing to be heavy handed with the public rules towards minorities is fuelling anger and hate," Ms Lattouf continued.

"Of course neither tell the whole story, but it's making Sydney even more divided. Nothing good comes of furthering these divisions."

A similar public turnout was seen on Sunday morning, with photographers capturing thousands of locals on Bondi Beach and surrounds as temperatures crept to the late 20s for the first time in months.

Saturday beachgoers at Coogee reported seeing a heavy police presence with officers meandering around, occasionally checking if members of the public were socially distancing.

Currently, Greater Sydney residents face $500 fines for not wearing a mask "in all indoor or outdoor areas, other than a place of residence". According to NSW Health, this includes when you are on a street, in a park, at the shops or at work.

Beaches 'safest place to be'

Local councils have prepared to close off access to beaches on Sunday if they become too crowded, while NSW Police have set up barriers at Bronte Beach, Red Leaf Beach and Camp Cove to control entry to the Sydney hot spots.

"NSW Police will be enforcing the Public Health Orders including the 5km travel limit, gathering in groups of no more than two, and the wearing of masks," Waverley Council Mayor Paula Masselos told The Daily Telegraph, while an ABC reporter at Bondi this afternoon described the beach as "heaving".

The scenes on Bondi Beach of mask-less people lying around yesterday were such a slap in the face for all those doing the right thing. It’s a question of equality and perception. It’s no good telling people to do the right thing and then allow thousands to say “nah, not me.”

Very nice to see some Sydney folk enjoying a glorious spring day at the beach yesterday. Not very nice to see how clearly the experience of this pandemic is divided along class lines. Both things can be true 🙂

The 5km rule really reinforces the different nature of our lockdowns across Sydney on hot days - locked in a dense urban jungle, or chilling on the beach? Trapped in Covid rising area, relying on bad hospitals or enjoying sun and surf? Depends on real estate you can afford$$ https://t.co/EszaZMf0DE

"I realise that many people who are living in southwestern Sydney and Western Sydney don't have access to (the beach) because of the restrictions," CHO Kerry Chant said on Sunday.

"So for me, it causes me some concern because clearly, I'm asking a lot of the people of southwestern Sydney and Western Sydney.

"I would like to see that people are really respectful and they are adhering to the public health orders as they move about. If they are walking along the beach. But I would not want crowds, people engaging, people socialising — that is not what we need at this moment."

Premier Berejiklian also warned Sydneysiders against getting complacent as the weather warms up, urging the public the peak in coronavirus cases was still yet to come.

The Premier also weighed in, waning against complacency.

"We know that people are tired after the enormous things we've been asking of them," Berejiklian said on Sunday.

"So I say to everybody please, don't start getting complacent now. We know the weather adds to our positivity and what we can look forward to in October.

"We cannot let down our guard and as much as we would love to be able to think about things that we can offer people between now and then, we have to take a very safe and cautious approach so that we don't risk any unnecessary further stress on our already stressed health system."