Instead, the Government this afternoon reported just 29 cases – making today the fourth in a row that numbers had dropped from the day before.

The alternative scenario could have seen around 200 new cases announced today – and perhaps 350 daily cases reported around this time next week.

That's according to just-released modelling by researchers at Te Pūnaha Matatini, New Zealand's Centre of Research Excellence in Complex Systems and Data Analytics. 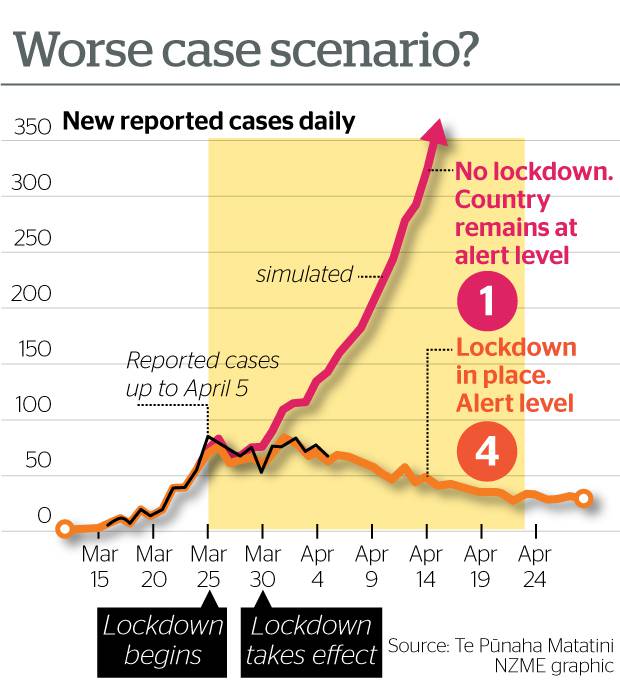 It also projected that case numbers would continue to hover under the 50 mark for the remainder of the month.

"We think the lockdown has had a significant effect, which means that our worst-case scenarios are no longer relevant, as long as we continue to be able to contain the virus," the centre's director, Professor Shaun Hendy, said.

"Ultimately we have to follow the case numbers and these will always lag behind the time when the infections take place.

"But in our graph you can see that if we hadn't gone into lockdown, then new case numbers would have been steadily rising since the end of March.

"The fact that the actual case numbers have not risen shows that lockdown is having an effect. Next week we should have a good sense of how much of an effect and what this means for our lockdown."

"What New Zealanders have done over the last two weeks is huge," Prime Minister Jacinda Ardern said this afternoon today.

"We are on track to meet their most optimistic scenario. We are turning a corner. But to succeed, we need it to keep working."

She pointed to earlier modelling that showed that New Zealand was on a similar trajectory to Italy and Spain - and that the 205 cases on March 25 could have grown to over 10,000 by now.

Hendy said the fact that New Zealand went into lockdown before case numbers climbed to high had given the country options that other countries no longer have.

"We may be able to eliminate the disease here before a vaccine comes along, which remains to be seen in Europe or the US, and even Australia," he said.

"What we can see is that lockdown measures similar to those we have used here have been successful in places like Norway, while countries that have had weaker policies, like Sweden for instance, have not fared as well.

"That should give us confidence that our approach has been the right one."

Early modelling by Hendy and colleagues suggested that New Zealand could have been facing between 10,000 and 80,000 deaths, had it been forced to choose between the strategies of suppression or elimination, that other countries have been left with.

The fact that New Zealand had moved in time to pursue its "elimination" strategy – and that its lockdown was now showing a big effect – meant such worst-case scenarios were no longer relevant, Hendy said.

But he warned the country still needed to be wary of a potential "bounce-back" in cases, given that very few people have any immunity to the virus.

"The disease could be reintroduced from overseas or it may flare up again in parts of the country," he said.

"If we lift the lockdown too early or slow down on our contact tracing and testing then this is a very real risk. This is even true in countries that have had the worst outbreaks.

"Everyone is going to have to be wary for some time."