Sky TV shares have sunk 7.3 per cent to $1.14 after the pay-TV provider axed its dividend, and could not say when the payout would return. The stock is now down 57 per cent for the year.

The suspension of the dividend came amid retail investors searching for dividend stocks amid rate cuts - and new streaming rival Spark keeping its dividend at 25 cents per share, and promising the same return for 2020.

Sky TV chief executive Martin Stewart made a short-term pain, long-term gain argument, telling the Herald that funds were needed as his company squared off in a fight for Super Rugby rights with Spark. Winning the fight for top sports rights would create more value for shareholders.

The axed second-half payout left the total dividend for the year at 7.5 cents per share against the year-ago 15cps and the 27.5cps paid in 2016.

Analysts had been the dividend to be trimmed as Sky diverted in funds to invest in new technology and compete harder for sports rights, but not wiped out altogether.

Earlier today, Sky reported a full-year net loss of $607.8 million on revenue that fell 6.8 per cent to $795 million. Its second-half dividend was axed but total subscriber numbers increased as streaming gains outweighed satellite customer losses - but with the company making less money per sub. 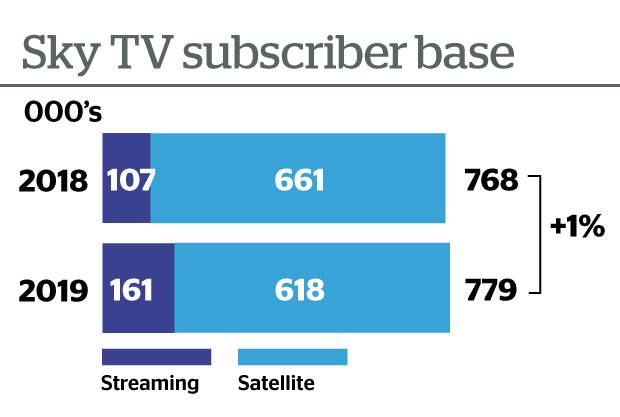 Stewart said the write-down was based on a "more conservative estimate of our future average revenues" and the fact Sky could "no longer include increases in hybrid and satellite subscribers."

He also cited Disney's new Disney Plus streaming service, which will launch in NZ in November, ending Sky's monopoly on Disney content - and forming part of a wider trend for content makers using apps to reach their audiences directly online. He said it was still being worked out which Disney content would be on Sky, and which available via Disney's own app.

Sky also wrote-off $38m on the cancellation of a decoder upgrade in favour of a focus on apps and streaming, a $6m content write-off as some shows were deemed surplus to requirements in a more streaming-focussed world, and a $5m charge for redundancies.

After allowing for various write-offs and the impairment, it made an adjusted net profit of $97m against the year-ago $119m.

"We acknowledge that this is not an ideal situation for investors, and ask that you support us in the strategy of investing to grow the business," Sky chairman Peter Macourt said.

Earnings before interest, tax, depreciation and amortisation were $230.1m against the year-ago $285.8m.

Total subscriber numbers increased 1 per cent to 779,000 from the year-ago 768,000 as numbers using Sky's Fanpass and Neon apps jumped 50 per cent. 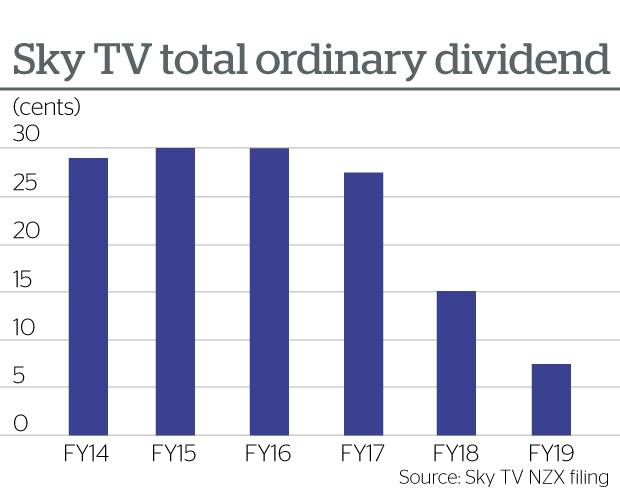 It was the first time total subscriber numbers have increased since a highwater mark of 852,679 was reached in 2016.

But the fact the streaming apps are cheaper than satellite plans meant overall average revenue per user per month sunk from $77.73 to $74.84.

Stewart reiterated that 55,000 watched the second Bledisloe Cup test online via Sky Go or Sky Sport Now with no issues - a back-hand dig at recent wobbles on Spark Sport (the test was also watched by 523,400 on Sky decoders and 408,000 free-to-air on Prime's delayed coverage).

Macourt will step aside as chairman at next month's AGM, as previously flagged. His successor was announced this morning: Philip Bowman, an ex-director of Sky TV UK who now lives in Auckland.

Stewart also unveiled a new logo (with his company's name now in lower case) and a new sponsorship deal that will see the cake tin in Wellington renamed Sky Stadium from January 1. 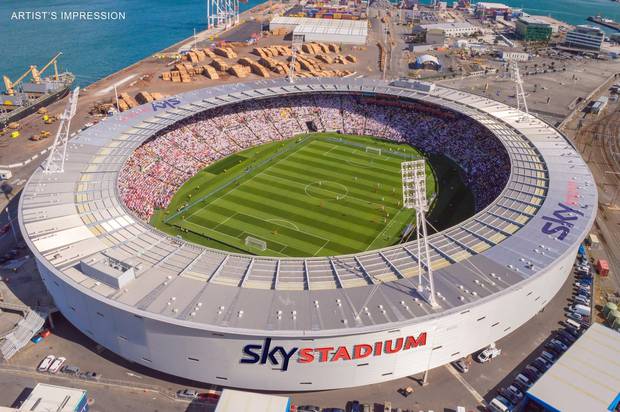 An artist's impression of how the cake tin will look after January 1, when "Westpac Stadium" will become "Sky Stadium" - with Sky's new lower-case logo. Image / Supplied

The new Sky boss has made sweeping changes to Sky's management after taking control in February, installing new sport, technology, strategy, finance and marketing heads. He also took his predecessor John Fellet's place on the board.

More recently, he has begun to implement strategy changes, axing Fellet's decoder upgrade plans in favor of investing more in streaming, expanding the number of Sky Sport channels to 12, beefing up content on his company's sports app Fanpass (now rebranded Sky Sport Now), securing a key multi-year contract with Cricket Australia, including the iconic Boxing Day test that Spark had been eyeing, and buying global streaming player Rugby Pass in a deal worth up to $62m.

Notably, Stewart today named global streaming, in the form of rugby pass, as one of Sky's three main planks - the other two being its traditional decoder business and its domestic streaming business with Neon and Sky Sport Now.

As well as the well-canvassed threats for Netflix, Spark Sport's ambition to bid for more rights and piracy, Sky now faces a trend that sees content makers like HBO (with the new HBO Max) and Disney (with Disney Plus) creating their own apps to reach audiences directly.

So far, Stewart's various personel and strategy changes have made no dent on his company's stock market fortunes.

Ahead of today's result, Forsyth Barr rated Sky "under-perform" with a 12-month target of $1.56.

Analysts Matt Henry and Matt Dunn were expecting Sky satellite subscribers to decline from the 668,000 reported for 2018 to 665,000.