Scared and stressed - that is how many people are feeling while lining up and having to wait hours to get tested for Covid-19, according to those on the ground.

People are turning up in droves to testing stations around the country after more cases of the deadly virus were confirmed in the last few days.

In Auckland, there are reports of people waiting anything between an hour or two to get the swab that will determine whether or not they are safe from Covid-19.

In one case, an Auckland resident reported waiting in their vehicle for four hours to get to the clinic set up at St Lukes.

That incident was reported by Act Leader David Seymour, who said a resident had contacted him about it.

"Some people can't afford to be taken out of action for two weeks by a positive test."

"Making them wait four hours makes it worse. How many people in the queue that day simply turned around after a few hours and went home, potentially spreading the virus?"

In West Auckland, the testing clinic at Te Whānau o Waipareira Trust, in Henderson, has seen record numbers in the last three days - not helped by the fact that other testing stations in the area have not opened back up since lockdown.

'A lot of stressed people'

The trust's chief executive, John Tamihere, said they had seen more than 400 people come through yesterday and about 377 people on Monday.

"A lot of people have a strong feeling of angst over this. A lot of people sacrificed a lot during the lockdown and they've started to panic again," he said.

"What we're noticing is a lot of stressed people and we try to temper them."

The congestion in the last three days had been so bad that a new route had been panned out today - with the line going down Catherine St and Dora St, towards the main road on Railside Ave.

Tamihere said they had seen a marked increase in the number of people coming in each day as more cases had been confirmed.

It is thought that that, coupled with it being flu season, any given symptom was being checked to ensure it was not Covid-19.

"No doubt it has [ramped up] because of the confirmed cases. That's what's caused it."

Epidemiologist Dr Joanna McKenzie would not be drawn on why she thought there were huge numbers of people lining up to get tested.

However, she said the fact that Covid-19 active cases had popped up again was "totally expected."

"It's totally expected that we will get cases at the border," she said.

"That's why it's important to keep things under control [at the border]." 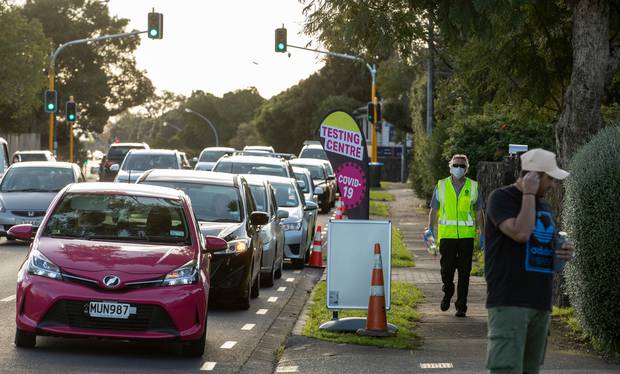 Members of the public queue for the Covid-19 testing station on St Lukes Road on Monday. Photo / Greg Bowker

As the number of confirmed active cases reached 10 yesterday, people were once again reminded to remember the Covid-19 symptoms and to get tested.

The symptoms are very much like those connected to the common cold or flu: A cough, a high temperature (38C), shortness of breath, a sore throat and a temporary loss of smell are all listed as signs for Covid-19.

Anyone with a runny nose or is sneezing regularly should also know that those are also symptoms for the virus.

Health authorities have continued to tell the public that symptoms can take up two 14 days to show after someone has already become infected.

"The virus can be passed onto others before they know they have it - from up to two days before symptoms develop," the Ministry of Health website says.

What to do if you have even one of those symptoms

The official advice from the Ministry of Health is if you have even one of those symptoms, call Healthline or family doctor.

"Call your doctor if you are feeling unwell or have any one of the Covid-19 symptoms. They will talk with you and arrange for you to be assessed if they think this is needed.

"This assessment will be based on your symptoms and circumstances."

If a doctor can not assess you for some reason, you may be referred to a Covid-19 testing station in your area for assessment.

Anyone in this situation is encouraged to ask their doctor for a note, email or text message saying you have been recommended for an assessment.

"You can show this note or text to staff at the assessment centre." A queue of up to 50 cars line up along St Lukes Rd, Auckland, waiting to get into the Covid-19 testing station last week. Photo / Dean Purcell