The owner of a dog that attacked a two-year-old Christchurch girl says it shouldn't be put down because the daughter's mother was warned it wasn't good with children.

However, the mother says she wasn't warned until after the attack.

Amelia-Jayne Morphus​ was attacked by the dog when she went to pat it outside her house. She was rushed to hospital and underwent surgery for her injuries. 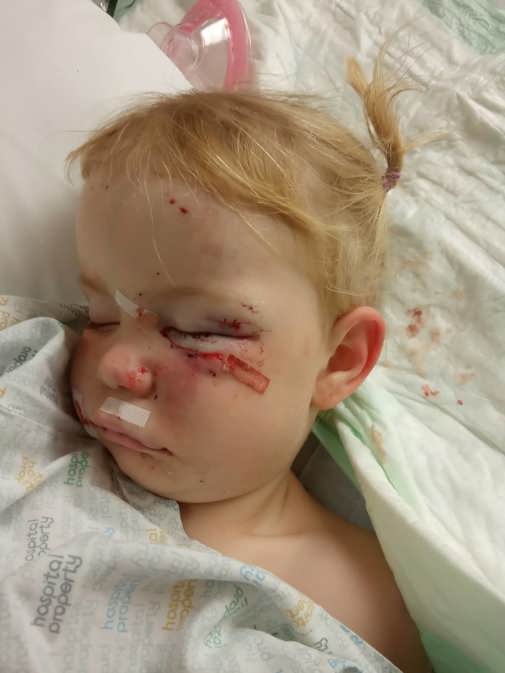 The owner, who wishes to remain anonymous, told Chris Lynch it is a tragic situation, but there's more to the story than what has been reported.

"Our thoughts continue to be with the mum and the daughter. It is a tragic situation and it sounds cliche but if we could go back in time and change the situation we would."

She said the incident occurred when her friend, who does a circular round, was walking her dogs.

"We have two dogs, one being a black Labrador and this other one [the one that attacked the child]."

She said her friend had previously had a conversation with Amelia's mum, Keri Morphus about visiting the family's pet kittens.

"They [the dogs] were restrained to the pram at the time...She had been invited in by Amelia's mum,​ to have a wee look at the kittens."

"She went into the house, and that was where the critical error was. She left the dogs unattended but attached by a short leash to the pram."

"She noticed that [Keri] was taking Amelia outside...and she raced out and said: 'Please don't go near the dogs, this dog in particular, he has not been raised around children, he's not used to children' but sadly Amelia had already got up to the dog and had gone to pat him," she said.

"He was attached to the pram, on a really short leash and he couldn't get away...when they are attached like that, they have no other way of saying they are uncomfortable."

"That was when he bit Amelia."

The owner said she had been in touched with Keri Morphus while Amelia was in hospital.

She said people need to be aware that unattended dogs shouldn't be petted.

"I want people to be more aware not to approach dogs that don't have the owner or the person in charge with them at the time."

"You don't just walk up to a random dog and pat them. You need to ask first [because] not all dogs are good with children."

She said the dog which bit Amelia is "such a mix of breeds it would be impossible to label".

She said they will follow all guidelines that the council give should they decide to let him live.

"He's a much-loved dog. He doesn't fit into the cliche dog that has attacked a child, he's de-sexed, he's registered...and we miss him dreadfully."

She said nothing like this has happened before and there will not be an opportunity for this to happen again.

"We've already got the muzzle sorted, we have a fully enclosed yard with a six-foot fence...we are going to take every precaution."

The council is still investigating the incident and hasn't decided whether the dog will be put down yet.

However, Amelia's mother Keri Morphus wants the dog put down.

She said Amelia never touched the dog that bit her and was petting the black Labrador when she was attacked.

"The dog just turned around came up to her and bit her. Amelia didn't even touch the tan dog like the owner is saying that she did. I would not let my daughter touch an unsafe dog."

She said the dog wasn't tied to the pram at the time of the attack.

"The dogs were playing in the creek and then the dogs got tied up after Amelia got attacked." 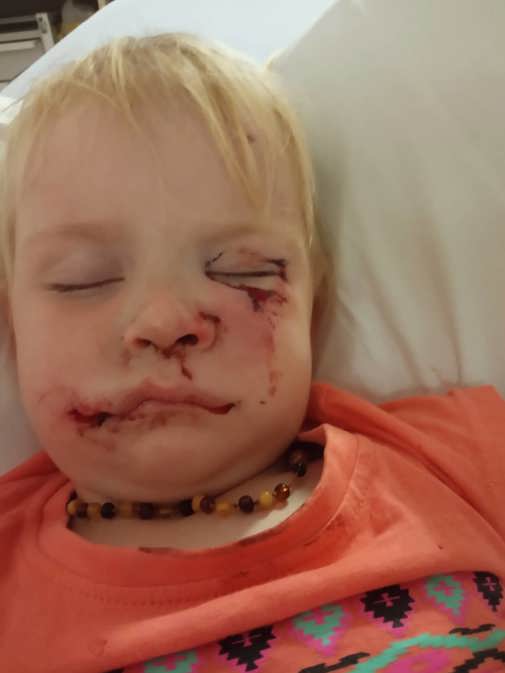 Amelia was rushed to hospital after the attack and underwent surgery for her injuries. Photo / Supplied

Morphus said she the dog grabbed hold of her daughter and wouldn't let go.

"I tried to get the dog off my daughter, I tried grabbing her but it wouldn't let go, and then it let go and Amelia ran to me...she was just covered in blood."

She said Amelia has an extensive list of injuries and is scared to leave the house.

"She had a hole in her mouth which had been cut near her lip, she had a cut under her eye that got her tear duct, the dog had also ripped a tooth out."

"She's having traumatic nightmares. Yesterday she woke up from her sleep late at night screaming and saying the dog was in her room."

Amelia was rushed to hospital after the attack and underwent surgery for her injuries.

She said her and Amelia are receiving trauma counselling.

Keri Morphus said the dog is dangerous and needs to be put down.

"I think the dog should be put down because it has tasted blood and who knows what is going to happen next, it could bite another child or another person."

She said she understands that it is a family pet, but she thinks it needs to be put down.

"I've been told that apparently the dog is not being out down and it has to stay at the owner's house."

She said she hasn't heard anything from the council about the investigation.