Some things never change in Rome, they say. Now, however, the Colosseum has proved that theory wrong, by opening its subterranean levels to the public.

It is not only the first time in 2,000 years that the area -- described as the "heart" of the building -- has been open; since the underground levels, or "hypogea," were where gladiators and animals waited before going into combat, this is the first time in the monument's history that the public has ever been allowed in.

Now, tourists will be able to walk through the passageways on a wooden platform and admire the corridors and archways which interconnected the hypogea between the rooms where gladiators and animals waited, before entering the elevators which would catapult them onto the arena. 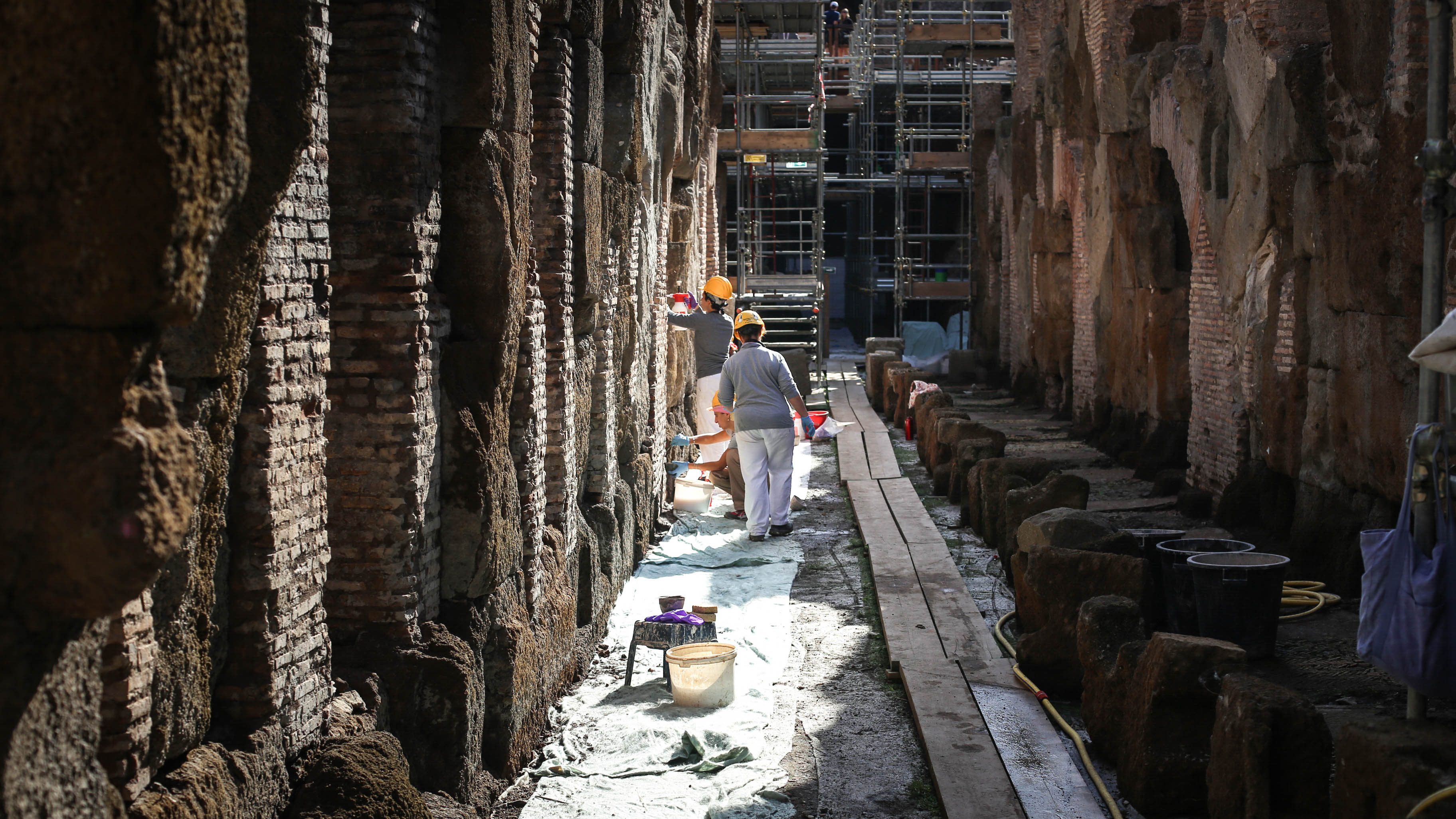 Back then, the hypogea was illuminated by candlelight. But with the arena's original ground level long destroyed, it is visible from the Colosseum's upper levels, and the sunlight filters down into its depths.

Italy's Ministry of Culture unveiled the enormous restoration of the vaults and passageways where those going into combat awaited. The works were a joint project in conjunction with Italian fashion brand Tod's and company CEO Diego Della Valle attended an unveiling ceremony.

Speaking at the ceremony, Alfonsina Russo, director of the Colosseum Archaeological Park, said that the works will allow people to understand better how the Colosseum used to function.

"This restoration is absolutely important for the archaeological research, because it enables us to reconstruct its history," she told CNN.

"This was the backstage of the shows that went on in the area. [It is the location for] all the preparation, even the technology -- they brought props, men and animals up into the area through a series of elevators and cargo lifts."

Done through the power of fashion

The restoration project -- which has seen the entire Colosseum restored over the past decade -- was started by Tod's CEO Diego Della Valle and Rome's Archaeological Heritage Department in 2011. The fashion house has contributed €25 million ($30 million) for the operation.

It has been carried out in three major phases, starting with a thorough clean of the monument's façade, and then moving to the underground areas. A small portion of the hypogea was opened to the public in 2016.

The major restoration works in the hypogea started in 2018, though they were delayed by the pandemic.

Archaeologists, restorers, engineers and architects are among the experts who worked to bring the landmark as close to its former glory as possible. The team used photographic surveys, surface mapping, and the slow and meticulous job of washing away centuries of dirt, deposits and microorganisms such as algae and lichen.

In some parts, they had to remove traces of previous restorations, which had decayed over time, and replaced them with what they describe as more authentic materials.

The restorers also installed a system to reduce the infiltration of water in the stonework, which is one of the main causes of decay. 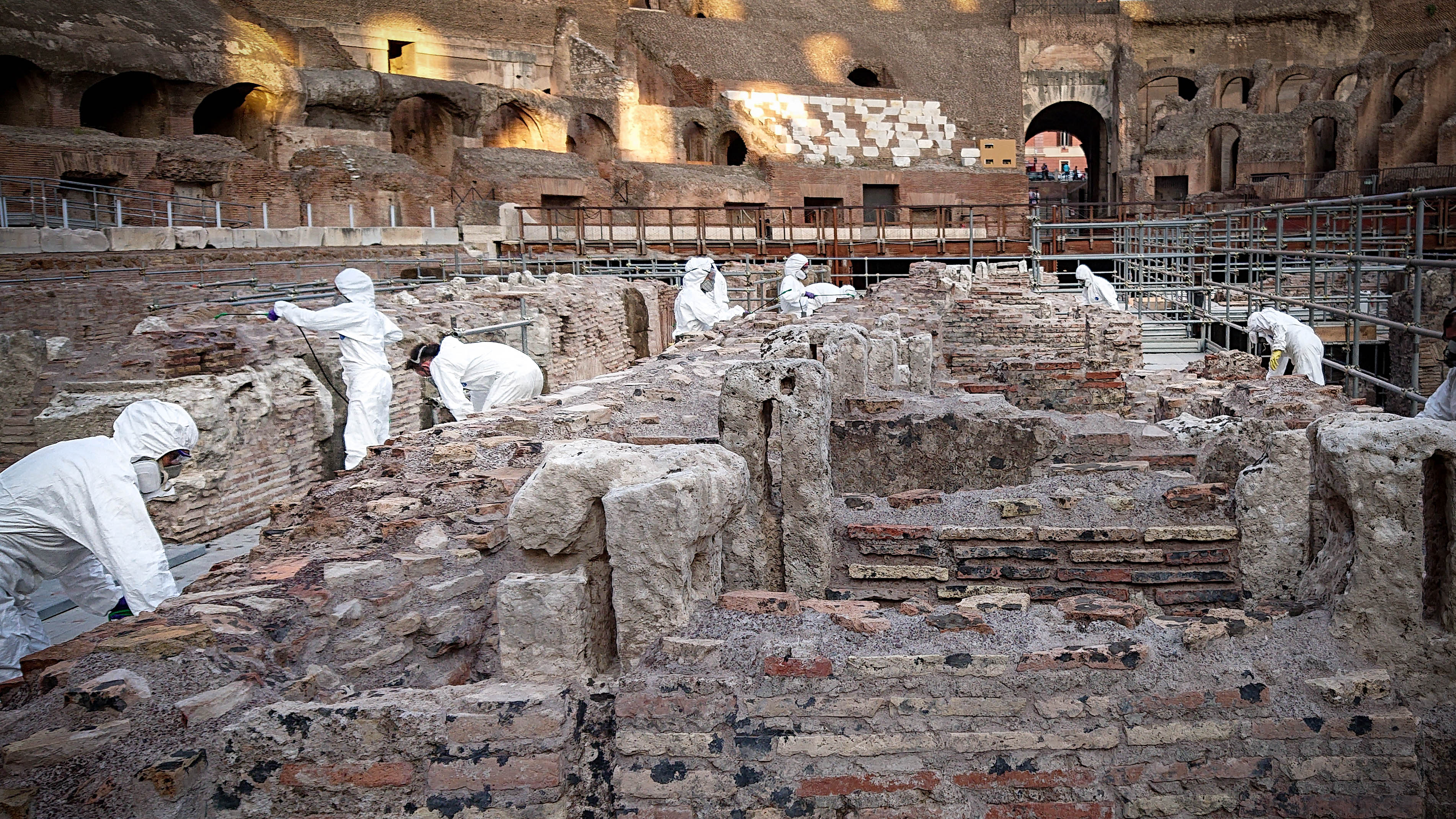 The Colosseum was built by the emperor Vespasian, with construction starting in 72 BCE, ending eight years later.

His son, Titus, inaugurated the Colosseum with 100 days of games, which included mock naval battles, execution of animals, and gladiator combat. According to ancient historian Eutropius, 5,000 animals were killed during those inaugural games.

In its heyday, the amphitheater could host between 50,000 and 70,000 spectators. After the fall of the Roman Empire, it was used as housing and as source of material for other construction work around the city. Now one of the most famous landmarks in the world, it attracted 5 million visitors per year pre-pandemic.

During the ceremony, Della Valle spoke briefly about the Covid-19 pandemic, and the impact it has had on the country -- which was the first hit in Europe -- describing it as a "tragedy."

"It is time to restart -- to move forward -- because there is a lot of work to be done," said Della Valle at the unveiling ceremony, urging other businesses to invest in restoring Italy's heritage.

Last month, the Ministry of Culture announced plans to build a wooden arena that will cover the hypogea, giving an idea of how the Colosseum used to be. The new arena will host concerts and other types of cultural events.