He is the sole surviving child of a man who once claimed to be the "world's greatest father" but who was in fact a a murderous monster.

But Isaiah Baxter, 22, has now revealed that he was also abused by New Zealander Rowan Baxter and that he wished he could trade places with his murdered half-siblings, Aaliyah, 6, Laianah, 4 and Trey, 3.

Isaiah, who in images on Facebook appears in loving photos with his siblings, reached out to his stepmother Hannah Clarke's family following the deaths. 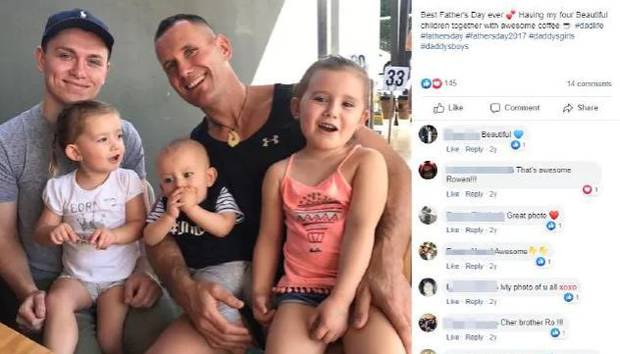 Tragically Isaiah (left), pictured with his three half siblings and dad Rowan, says he was also abused. Photo / Facebook

Hannah and her three children died last week when Rowan Baxter set them alight in a car after ambushing them on the school run. He then took his own life.

Isaiah, who is Rowan Baxter's eldest child from a previous relationship, revealed in a message sent to Ms Clarke's family that he too had been subjected to reign of terror.

"We shared a similar bond, as we both suffered years of domestic abuse and torment at the hands of Rowan," Isaiah said in a message to the family read out by Hannah's brother Nathaniel.

Speaking on A Current Affair, an emotional Nathaniel read the message from Isaiah, who had been estranged from his father for years.

"If I could take the place of Laianah, Aaliyah, and Trey I would in a heartbeat."

Earlier, Isaiah had paid tribute to the family, posting on Facebook a picture of Brisbane's Storey Bridge lit up with pink lights for Hannah and her children with "#SmallSteps4Hannah".

Isaiah added heart and butterfly emojis to the hashtag which references the charity Nathaniel Clarke and grieving parents Lloyd and Suzanne have set up in their daughter's honour to fight domestic violence.

Although Rowan Baxter posted photographs of his eldest son on his Facebook, many of him embracing his younger half siblings, Isaiah says there was no truth to the happy family image his father tried to present.

Rowan posted on Facebook "happy 16th birthday to my son … your (sic) now a young man time to spread your wings ma boy".

Hannah Clarke and children Aaliyah, Laianah, and Trey who were murdered by Rowan Baxter in Brisbane. Photo / Facebook

Rowan Baxter murdered his three children and his estranged wife when he jumped into their vehicle in a suburban Brisbane street and held a knife to Hannah. When she tried to stop for help he poured accelerant, set it alight, jumped out and then killed himself at the scene.

The three children died in the car while Hannah escaped the vehicle but died later in Royal Brisbane Hospital from her horrific burns.

Her family has revealed she endured an 11-year abusive relationship with Rowan, who she married in 2012, who was a "control freak" and was under a restraining order when he ambushed and murdered his wife and children.