National Party leader Judith Collins wants to put $250 million over four years into a suite of measures for skills training, including retraining 30,000 unemployed people and helping 5000 tradies start their own business.

Collins made the retraining and skills policy announcement in Nelson today, following last night's Newshub Reid Research poll that had National on 29.6 per cent support.

"Central to this is SkillStart, a rapid retraining and job placement scheme, which will get displaced Kiwis into jobs quickly and provide a strong incentive for polytechnics, universities and private training providers to deliver short training courses," Collins said.

SkillStart would cost $120 million over four years, and is aimed to get 30,000 people back into work. Tertiary training providers would be eligible for $4000 for every unemployed person they retrain into fulltime work within a year.

New training courses would be approved within three months through a new, fast-tracked NZQA-approval process, she said.

"This fast-tracked process will only be available for existing providers with good track-records."

Programme length will range from three months to a year, with payment to providers conditional on the new employee keeping their job beyond the 90-day trial period, which National wants to re-introduce for all businesses.

• Small Business Builder – a 12 week training and mentoring programme to provide 5000 experienced tradies with the skills they need to start a business.

• Small Business Accelerator, costing $20 million - a $5000 subsidy for at least 4000 small businesses for management training to help them generate jobs.

• Set targets to reduce the number of beneficiaries and the number of children in beneficiary households, and money management for those up to 25 who don't fulfil obligations to look for work

Labour has already announced its intention to put $300 million into a flexi-wage scheme - a wage subsidy to help employers hire those on a benefit and/or at risk of unemployment. Businesses would receive a subsidy of $7500 on average - and up to $22,000 - to hire unemployed New Zealanders.

Smith said there had been some community frustration about a lack of certainty on the schedule to rebuild the hospital.

The Government is pushing ahead with the earthquake-strengthening of Bowen House in Wellington, which Smith said showed the usual propensity to look after their own ahead of other important buildings such as Nelson Hospital.

The tower and chimney of the hospital only met 20 per cent of the current earthquake standard, he said, and by law the building had until 2028 to meet the new standard.

Smith laid out National's timeline including community consultation next year, detailed designed work and costings the following year, consenting work in 2023 and construction from 2024 until 2027.

There was no certainty around the cost of the upgrade but it would be in the hundreds of millions of dollars, he said.

The new hospital would have 200 beds, he said, or a third more than the current 149-bed capacity.

It would be on the current hospital site.

"We don't want to spend millions of dollars on bureaucrats exploring other sites." 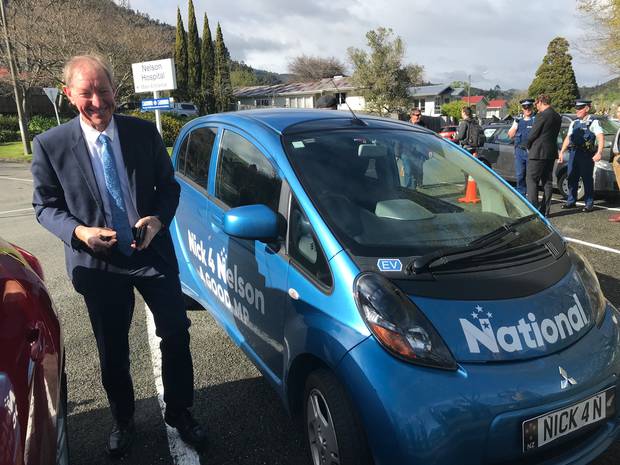 The announcement follows a Newshub Reid Research poll last night that had National on 29.6 per cent, well behind Labour on 50.1 per cent.

National's result was up 4.5 percentage points from the previous Newshub Reid Research poll, which the party had dismissed as rogue.

She is finishing the day with a meeting with the local GreyPower chapter.