Aspen Ladd's fight against Macy Chiasson at UFC Vegas 38 this weekend has been cancelled after distressing scenes at the 26-year-old's weigh-in.

At her first attempt, Ladd weighed in at 141.5 pounds (64kg) for the bantamweight bout — 5.5 pounds (2.5kg) over the 145 pound (61kg) limit. She took her clothes off and stripped down for her official attempt as UFC officials brought out a wall to shield her from view, but she still came in a touch heavy at 137 pounds (62kg).

Fight fans were troubled by what they saw at the weigh-in as Ladd was shaking and looked visibly unsteady on her feet, at one stage almost collapsing before she was helped by officials.

Respected MMA journalist Ariel Helwani tweeted: "Aspen Ladd should not fight tomorrow. That was extremely troubling. Common sense has to prevail here. What in the world."

Fellow MMA reporter Alexander K Lee said it was a "truly scary weigh-in scene with Aspen Ladd this morning" while TSN's Aaron Bronsteter added: "Aspen Ladd has been standing on the scale for 3-4 minutes, looking weak and even shaking at times as they are unable to register her weight.

"They are asking her to lift her arms. The last time that she did, she nearly toppled over … that was troubling to watch." 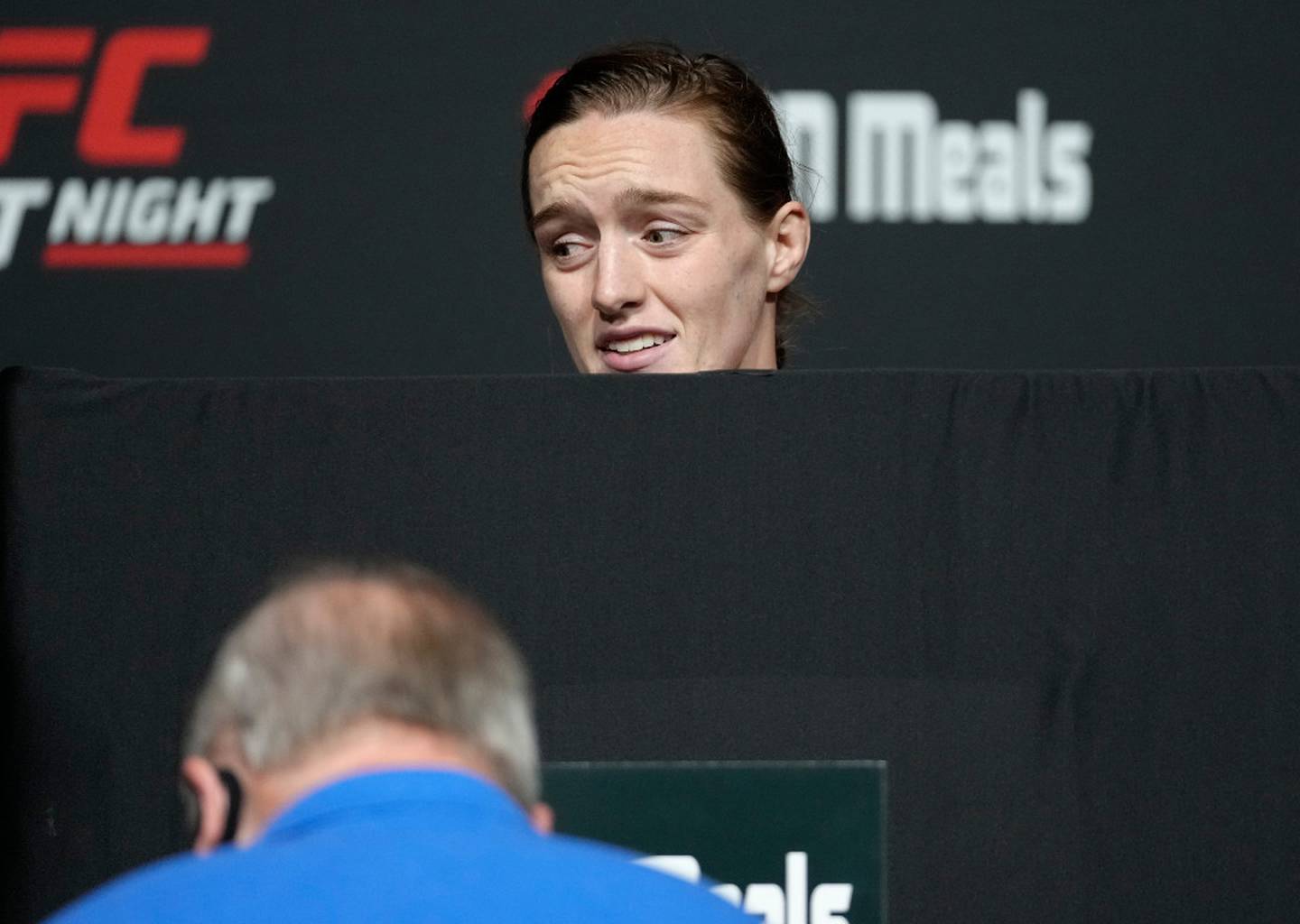 Ladd later took to Instagram to explain what went wrong.

"Fight is off. Again. All my fault," she wrote. "Straight up started my period 2 days back and made this cut absolutely miserable.

"Did the best I could, hit 137, the scale situation was a mess because the last thing I wanted was to bleed in front of the media.

"The fight wasn't pulled, my opponent then decided she would rather not go through with it, as is her right. I'm going to get slammed regardless, so let it begin."

In a follow-up social media post, Ladd apologised to Chiasson, the UFC and her fans.

"There are times when you think that you do everything right and then mother nature comes into play but bottom line is you've got to prepare for anything and everything," Ladd wrote.

Ladd has been out of the Octagon for nearly two years and has had multiple fights cancelled during that time because of injury and weight troubles.

Before a 2019 clash with Germaine de Randamie, Ladd was shaking on the scales and later revealed the "brutal" toll of trying to shed enough kilos in time.

In 2018 the American missed weight by nearly 1kg for her bout with Leslie Smith, prompting the fight to be cancelled.

Her latest worrying weigh-in sparked calls from the UFC world to move up a division to featherweight (145 pounds or 65.8kg) because bantamweight is clearly proving too much of a stretch.

Bronsteter tweeted: "Aspen needs to start fighting at 145.0lbs. How many more of these scary weigh-in incidents can she have?"

Artist Josh Keyes wrote: "Aspen Ladd needs to make changes to her training camp, her coaches and herself. Enough is enough."

Writer Elias Cepeda added: "Does Aspen Ladd have to die for her team, the UFC, and athletic commissions to start paying more attention to her weighing in issues and health?"