The true celebration of the All Blacks and Springboks' rivalry arrived one week late on the Gold Coast.

Two late penalties – the first 15 seconds from fulltime – handed replacement Boks playmaker Elton Jantjies the chance to knock over the match-winner and, from in front of the sticks, he made no mistake to pull off the upset three minutes into added time.

Not long prior to Jantjies, Jordie Barrett stepped up – just as he did last week - to nail two clutch penalties that looked as though they would be enough to secure the All Blacks a Rugby Championship clean sweep.

It was not to be, though. This time the Boks pinched the glory. With Handre Pollard spraying seven points off the tee, no one could suggest the Boks did not deserve the result.

On the back of English referee Matthew Carley, the Boks piggybacked their way down field where Jantjies added his penalty to a drop goal five minutes earlier. 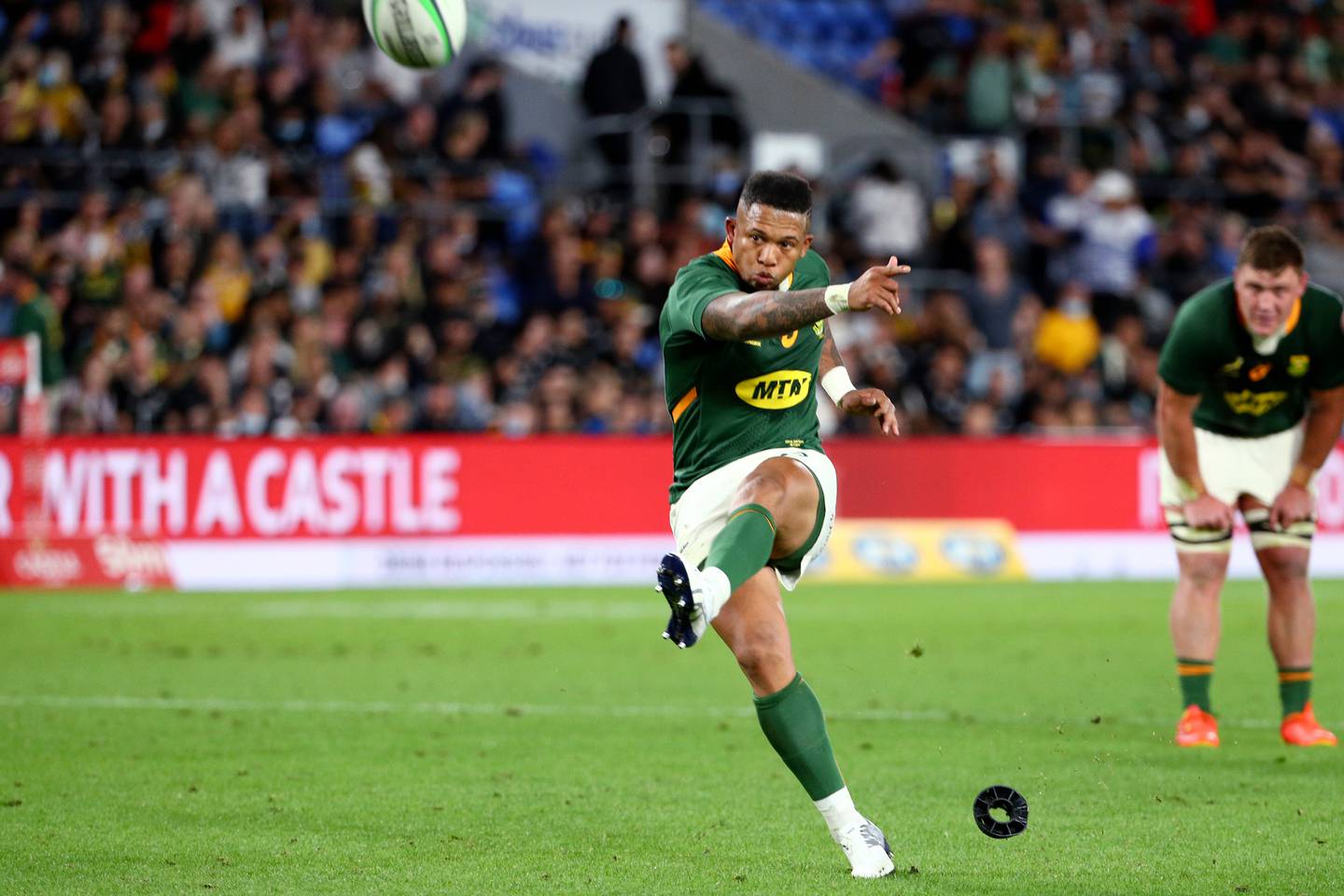 The Boks win snaps their three-match losing run – their first since 2016. It also ends the All Blacks' nine-game unbeaten streak, and robs them of the world No 1 ranking they held for all of two weeks.

In the end the All Blacks were left to rue a lack of composure and costly discipline at the death.

This one had blood, brutality and beauty in spades.

The Springboks pulled something of a swifty to mix their traditional power with genuine skill. It wasn't a total transformation – the Boks still brought their furious strength to disrupting the breakdown and lineout, and their smothering line defensive line speed.

This time their backline, the midfield pairing of Damian de Allende and Lukhanyo Am in particular, had the chance to showcase their world-class skill.

The All Blacks escaped last week thanks to Barrett's late, long-range strike and for much of this match they were again on the back foot, scrapping with everything they could muster to stay in the fight.

After being relentlessly pressured for long periods the All Blacks scored three unanswered tries to lead 20-11 in the first half. By halftime, the Boks closed that gap to 20-14 and they emerged out of the sheds breathing fire to take control in the second spell through Makazole Mapimpi's try.

From an attacking perspective, unlike last week, the Boks more than played their part - centre Am's outrageous behind the back flick ball for de Allende's opening try no one saw coming, but it was their dominant pack who paved the way for victory.

At times the All Blacks found effective ways to respond, but not for long enough. 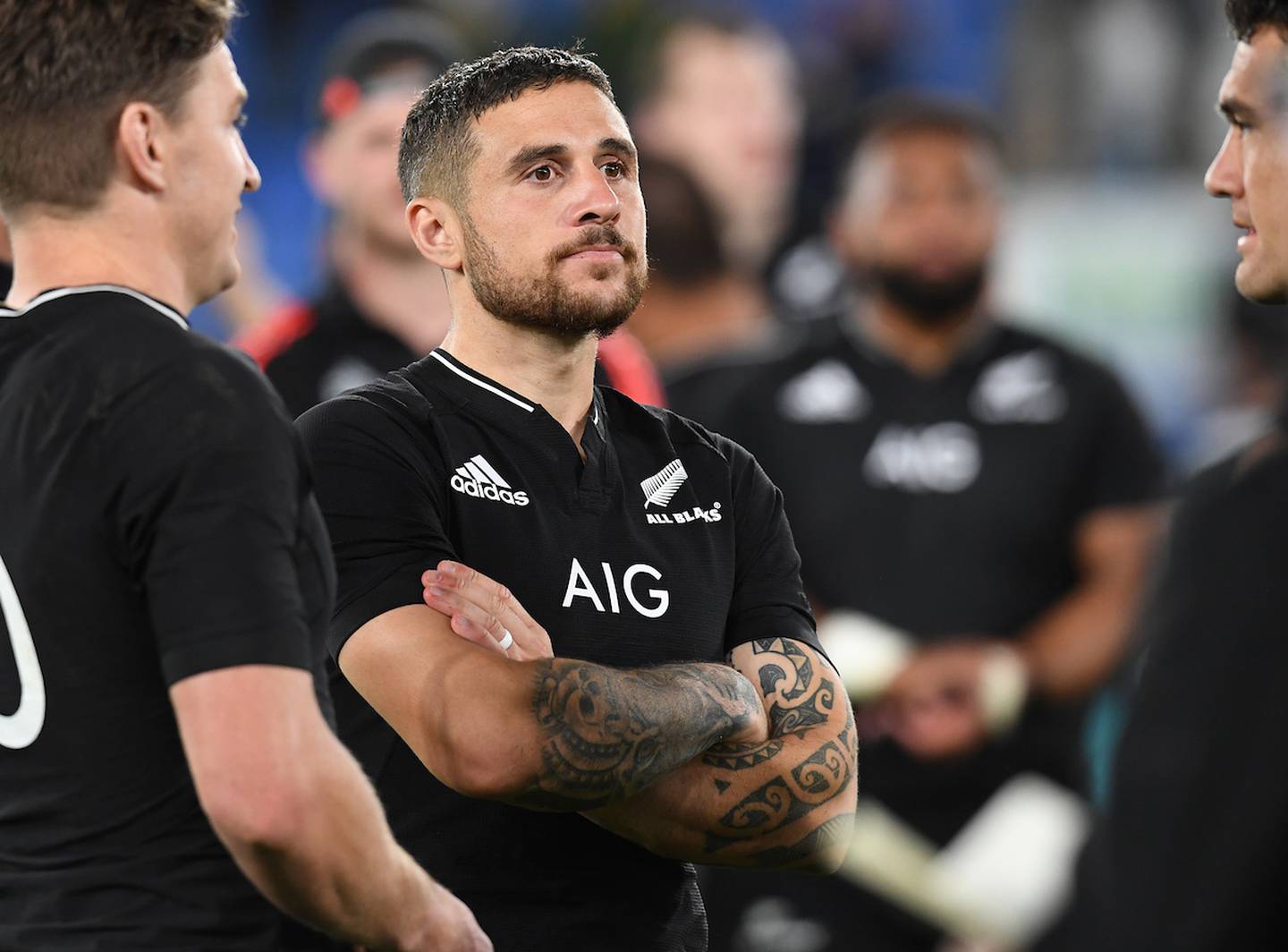 All Blacks halfback TJ Perenara was dejected after the final whistle. Photo / Photosport

Once again the All Blacks had issues under the high ball and their lineout faulted at crucial moments. Boks hooker Bongi Mbonambi should have scored after swooping on a botched lineout and charging through Akira Ioane to the line, only to lose the ball just short.

Adjustments were, however, also evident from the All Blacks.

Instead of attempting drives the lineout ball the did win was largely used off the top, while kickoffs were sent up the middle of the park to make them more contestable and try negate Faf de Klerk's box kicks.

Jordie Barrett's direct incisions from the back field were influential, and their ability to identify space through short kicks improved. Beauden Barrett's pin point cross-field chip for Sevu Reece's try was one example, but he lost his way in the second half to hit one well out on the full.

While the Boks were much more adventurous, fullback Willie le Roux was a liability and it was no surprise to see him hooked at halftime for the experienced Francois Steyn, who made a major impact with his kicking to nail one 50-22.

Challenged at their set piece and breakdown, the All Blacks battled to create enough genuine chances.

The All Blacks' bench was supposed to run over the top of South Africa but instead it was the Boks, through changing their full front row just before halftime, that stole the jump with Malcom Marx and Steven Kitshoff having a major impact.

The All Blacks best moment of the match came from rare back lineout ball. From there, Beauden Barrett put the foot down to break through, offload to Rieko Ioane who sent Ardie Savea over for a superb try.

While that moment will feature prominently in the highlight reel, the Boks ultimately prevailed to leave world rugby's most gripping rivalry evenly poised