On a day when the Black Caps could have been reminded of their unwanted past, they instead received overwhelming evidence of their spectacular future.

Playing at Lord's for the first time since that match (you know the one), the Black Caps were treated to a different kind of sensation, as Devon Conway rewrote the record books with a sensational unbeaten 136 on test debut, leading New Zealand to 246-3 at stumps after day one of the first test against England.

Conway didn't just introduce himself to test cricket – he knocked the door down and made everyone take notice.

The 12th New Zealander to make a century on test debut, none has been as notable as this. Conway made the famed Lord's honours board on his first try, and produced the highest score in the 137-year history of debutants at the ground.

Perhaps most impressively, he did so as an opener against a new-ball pairing - James Anderson and Stuart Broad - with a combined 1131 wickets, playing in their home conditions.

Although a debut century doesn't ensure a profitable test career, with the way Conway has crushed every challenge in his wake on his New Zealand journey it is almost assured his test travels are set to follow a path closer to Kane Williamson than Hamish Rutherford.

Forced to bide his time before his debut to meet residency requirements after moving from South Africa, Conway turns 30 next month, so doesn't have the 15 years of dominance available to him that Williamson did when he hit his debut century.

But based on what he's displayed so far, and further hammered home in this innings, the next five years (and possibly beyond) could be a chance to – whisper it – see another New Zealand great perfect his craft. Unfortunately for the lowkey Conway, there will be no lowering of expectations after today, not after he steered New Zealand to an exceptional start in their quest for a first test series victory in England this century.

After confirming an XI which saw Mitchell Santner earn the final bowling spot over Matt Henry, Williamson won the toss and took a positive approach, opting to bat first, and after Tom Latham saw off the first three overs, Conway took strike looking to prove that he can conquer every cricketing format.

What followed was more convincing.

Conway stroked his way through to 43 off 62 balls at lunch, slowly unfurling the classier shots that have been a staple of his game domestically, and translated to the international white-ball scene.

Mark Wood produced England's fastest over in tests since records began – 150.4km/h on average – which saw Conway take a few blows, but while the odd inside edge remained, he offered no chances for the fielders in the first two sessions, his scoring rate slowing as England's bowlers started to find their rhythm.

The wicket didn't offer much to the bowlers in the first session, who were also guilty of bowling too full. Latham was the sole wicket to fall before lunch – chopping on playing an uncommitted defensive shot to Ollie Robinson – but the bowlers improved in the second session, especially Anderson and Broad.

Before the test, Williamson had revealed his admiration of the lunch offerings at Lord's, and perhaps he over-indulged. The first ball after Williamson returned from gorging on mint and honey glazed lamb cutlets, it instead was Anderson dining out, luring the Kiwi skipper into a late shot, and the ball bouncing onto his stumps. 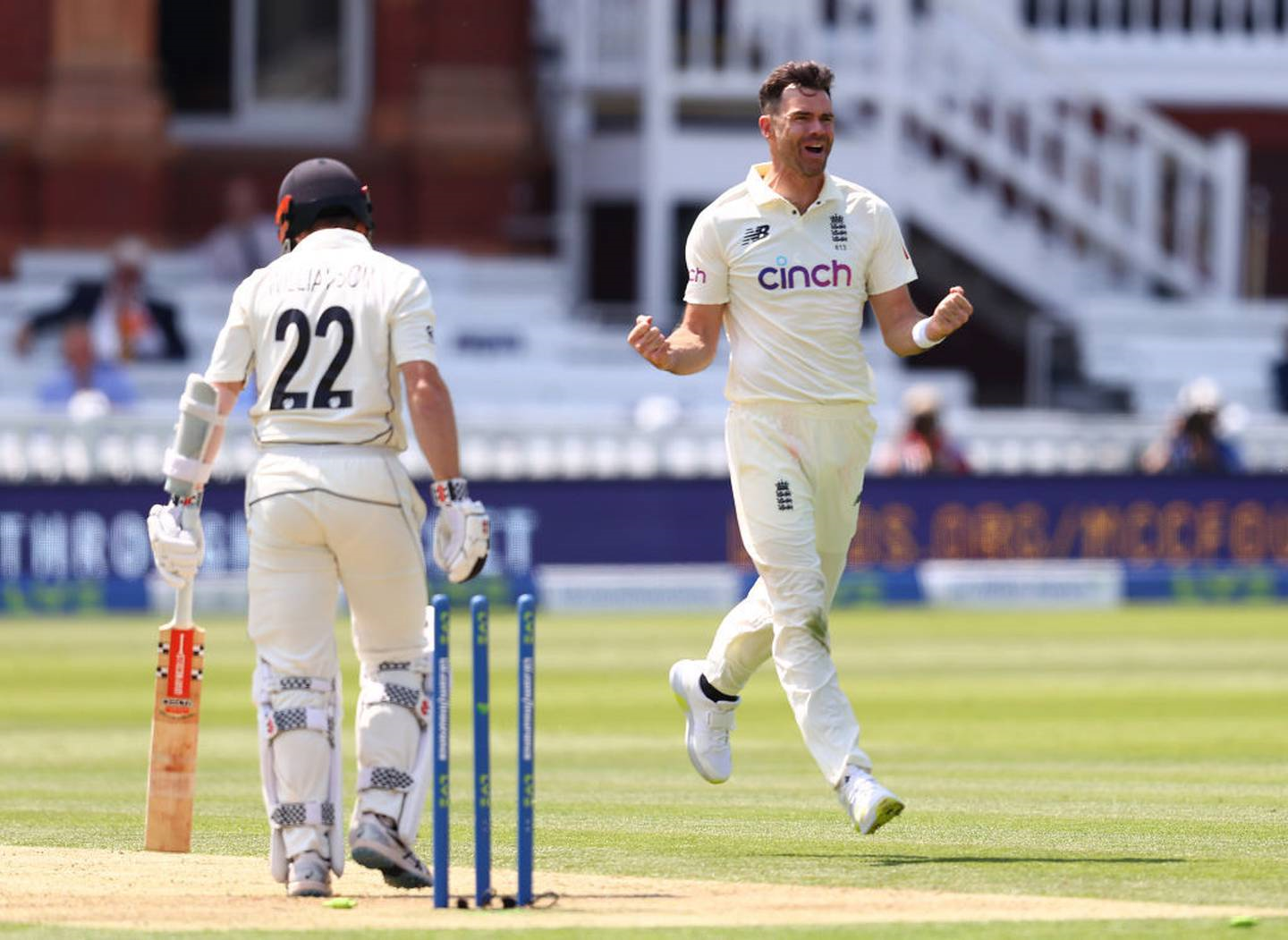 He was gone for 13, and England were hungry for seconds, with Ross Taylor never looking comfortable.

With Broad and Robinson targeting his pads, and foot movement lacking, Taylor was eventually trapped in front by Robinson for 14, and New Zealand had slipped to 114-3.

Conway was still there though, and brought up his 50 from 91 balls, supported by Henry Nicholls, who looked at ease but picked out plenty of fielders to inch his way through to 10 off 51 at tea.

After tea, Conway picked up the pace. On 77, he offered his first chance to the tiring England fielders, with a flick down leg flying past the dive of Zak Crawley at leg slip.

That was a cue for the runs to flow, with Conway showing Wood he's not afraid of the short stuff with several cracking pulls, before bringing up his century with an exquisite shot off his pads, flicking his wrists to a Robinson delivery and sending it away to the square leg boundary before soaking in the standing ovation from his teammates on the balcony. 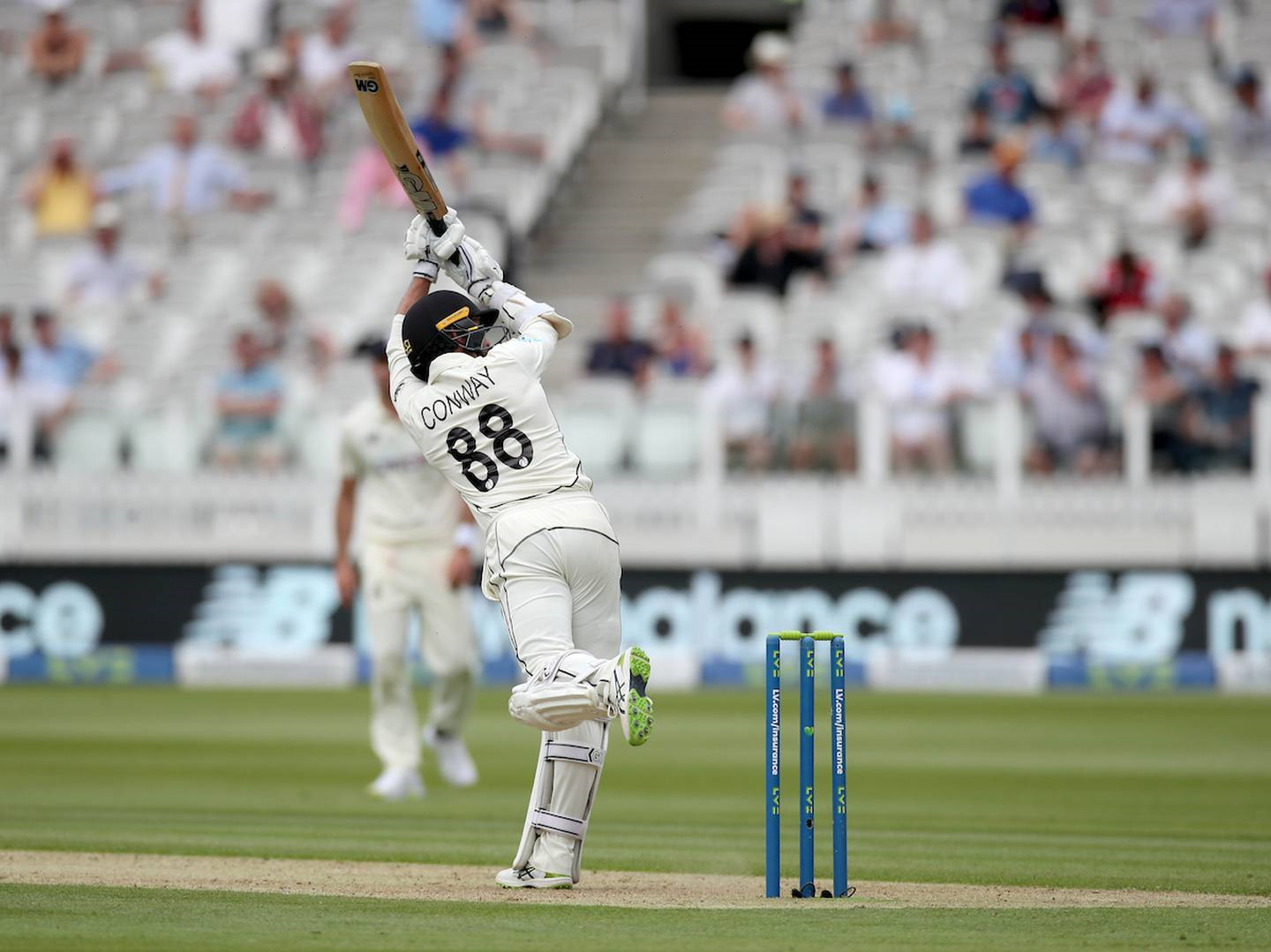 The shot that brought up Devon Conway's 100. (Photo / Photosport)

There was more to follow – just not for England's bowlers. Conway kept piling on the runs, with Nicholls unbeaten on 46 as the pair added an unbroken 132 and ensured a tiring day two awaits for England's attack.

Perhaps there's even more in store from Conway on day two – at this rate, who would bet against it – but today was undoubtedly his day, shown in the applause that rained down as he strode off the field - fans, teammates and opposition acknowledging his first test century.

The first of many.