"Parliament is a toxic culture that chews people up and spits them out. You become inhuman and disconnected from the people you purport to represent."

The outspoken words - expressed in a new Loading Docs video screening on nzherald.co.nz - are unusual for most politicians but reflect the experience of the Green list MP and candidate for Central Auckland, who has thrown herself into some of the most controversial topics during her first term, and come out with scars. Swarbrick is contesting the seat being left open after Nikki Kaye, National, left.

She's led the conversation around drug reform - in particular the referendum on recreational cannabis, spoken about her own battles with mental health, been open about her sexuality, and a fierce advocate for youth in being the country's youngest MP at 26.

But in doing so, she's also encountered a near-daily barrage of personal attacks – much of it online. 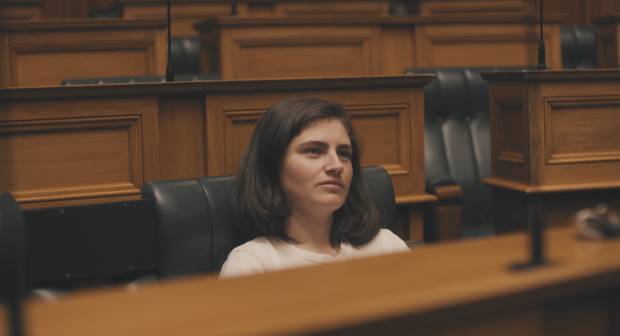 "My life is a bit of a platter. There is the drug law reform, age thing, the gay/bisexual thing - those are all different ways you can pigeonhole me.

"There are not many politicians who are willing to go on the record about mental health," she says in the NZ On Air-funded video. "I discovered why when I spoke about it, and got emails from people telling me I am crazy, that I shouldn't be near power."

"Shoot the stupid bitch" and "piss off woman", are just some of the comments Swarbrick highlights from regular social media posts.

She is also regularly shut down because of her age - "naive" being a go-to insult.

The one time she responded, quipping "OK boomer" to a National MP heckling her in Parliament about her own age - subsequently going viral and becoming the subject of countless memes, she herself was accused of being insensitive.

She later explained the term was ironically used when younger people were sick of not being taken seriously – something she has gained a lot of experience in.

"I am totally robust to criticism around policy, but not constant personal attacks."

She says she tries to brush it off, but fears the more politicians are expected to do that, the less "human" they become.

"You cannot grow so thick a skin you cannot hear anymore. It is exhausting teetering around that edge."

"Toxic" is an adjective thrown around in New Zealand politics a lot of late.

Both National MP Sarah Dowie and Labour MP - and former minister - Clare Curran railed against it - and the maltreatment of women and patriarchal view of society - in their valedictory speeches.

"New Zealand has a long way to go with how we view women," Dowie said. 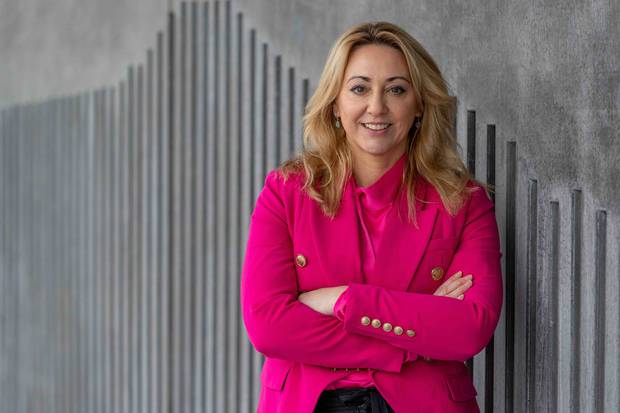 In her speech Dowie highlighted her treatment following a police investigation last year into text messages she sent to former National MP Jami-Lee Ross, who she had an affair with.

She spoke about the difference in treatment women MPs receive and how other politicians are not as scrutinised by the media and "hide behind" mental health issues.

"It certainly didn't make it easy having untruths out there in the media which meant it encouraged the patriarchy demonstrated not only by the media and men but also by women who have no comprehension of abuses that can occur in New Zealand," she tells the Herald.

Curran has recently opened up about her experiences.

The worst of it was in 2012, when she was sent photos from the National Party's Mainland Region conference, one showing fellow Dunedin-based MP, National's Michael Woodhouse, posed with a blue toilet seat with her face emblazoned on it.

The seat was reportedly used as a trophy for a debating competition.

"It damages people – it damaged me," she tells the Herald of the "toxic" culture.

Curran's exit from Parliament followed a series of meetings she failed to record as a minister.

She says she accepts she made a mistake, but believes the intense scrutiny would have been different had she been male.

Curran commissioned research on coverage of her from September 30, 2017 (the week after the general election) to October 27, 2018. 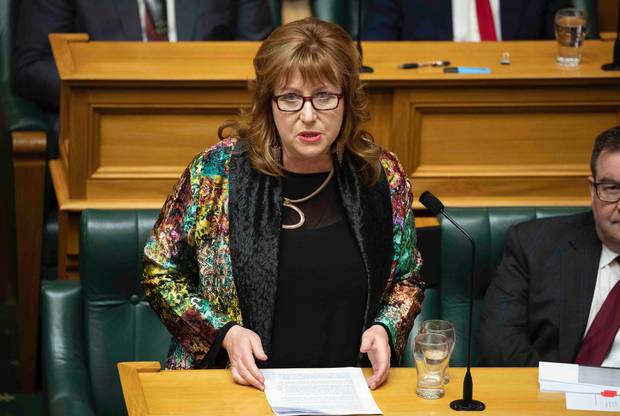 Curran believes the adverse coverage – 344 of the 509 were rated as negative or very negative – was "gendered" and included words such as "hopeless", "hapless" and "useless".

There remained a "stereotype" of a politician, expected to have thick skin, be used to rough and tumble, she said.

"'Toughen up' - I don't know how many times I have been told that. After 12 years I do not I think that is what made me a good politician. I do well particularly at a local level, listening to people, battling for causes.

"I know there is still a lot of fear, particularly for young women, about what to expect and the level of scrutiny.

"I fear often people who are the most sensitive and intuitive and collaborative, are people who cannot withstand the culture, and that does not reflect our society."

This culture it is far from confined to New Zealand politics.

Recently, United States congresswoman Alexandria Ocasio-Cortez condemned "an entire structure of power against women" in denouncing Republican Congressman Ted Yoho after he called her a "f****** b****" outside the House of Representatives, in front of media.

"[Yoho had shown] the world that you can be a powerful man and accost women," she said in a speech that went viral around the globe.

Dr Sarah Bickerton of the University of Auckland's Public Policy Institute said there was a gendered nature to political criticism, particularly those who did not fit the stereotypical "old, white male".

"We conceptualise politicians as male by default, and so when a woman takes on the role of a politician she is automatically contradicting her gender role.

"Attributes like assertiveness or charisma are seen as aggression or narcissism.

"But then if she does the reverse and embodies emotionality and empathy, she gets criticised for being 'un politician-like'. It becomes a bit of a tightrope walk." 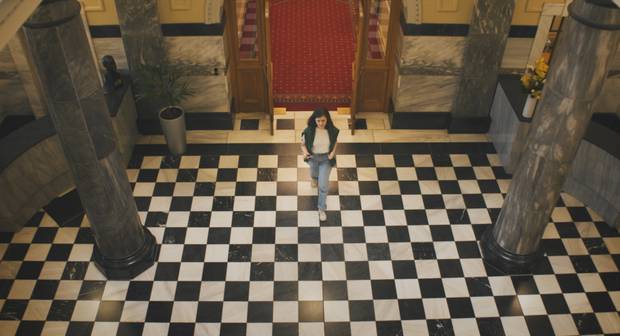 Chlöe Swarbrick has opened up on the toxic culture of Parliament in a Loading Docs interview. Photo / Film7

Examples include former Prime Minister Helen Clark, who was often criticised for being "unwomanly".

In playing to that gender role women often end up relating more to personal experiences and anecdotes, which helped resonate with voters but also left them vulnerable to attacks.

This applied to any politician who sought to stray from the traditional model, but in particular women of colour.

Bickerton refers to the experiences of Green MP Golriz Ghahraman, who spoke openly about being a former refugee from Iran and was subjected to hate speech online, and former Green Party co-leader Metiria Turei, who eventually resigned after sharing an anecdote about lying to Work and Income after fearing her benefit would be cut.

"I think most people still think of a dude in a suit, and when someone does not fit that mould, there is an unspoken requirement to validate themselves."

Political scientist Dr Bryce Edwards said there was "no doubt" Parliament was a "toxic and often unpleasant place", but there was a degree of subjectiveness.

"What to one person is rigorous debate or holding the powerful to account, is to another person [toxic] – especially those politicians under criticism."

There was also no doubt abuse of politicians has traditionally been of a gendered nature, which had been detrimental to the participation of women.

But there was now an "extremely heightened sensitivity" to correct these issues, and that two women are this year battling to be Prime Minister was an indication of progress.

"And the fact that this has happened before – in the 1999 election – should reiterate the progress that has been made."

He also cautioned against an increasing intolerant trend of criticism and disagreement.

"It is also the case that it is often ... some of those that have made the loudest complaints about the toxicity or bullying in politics are, ironically or hypocritically, some of the politicians most inclined to bully others or to exude toxicity.

"Politics should be uncomfortable for those in power. They need to be accountable."

Part of the problem was also down to New Zealand's "heavily conformist, anti-intellectual, and pragmatic" political culture, which was not very welcoming of "unorthodox politicians".

"Really, we simply need to get better at debating and disagreeing," Edwards said.

"Part of this is learning not to personalise our differences. But generally, it's the politicians that are often the worst at this."

This "toxic" culture was the focus of the Francis Review, an external independent review of bullying and harassment at Parliament, released in May last year, and which painted a grim picture of working in the country's heart of democracy.

A spokeswoman for Parliamentary Services said 38 of the recommendations had been implemented with another 32 under way.

Key changes included introducing a code of conduct for MPs, and a confidential channel to report any breaches.

"One year on, our journey is still just beginning but it's been incredibly heartening to see our people across Parliament believe in what we are trying to achieve and contribute so positively to this work," she said.

Swarbrick said the changes were positive, but she feared the exclusive culture - which made for a less collaborative and constructive environment - could dissuade others from entering politics, many of whom were already disillusioned.

"I do think it is improving, and the reason I speak to these is not to draw sympathy, but to try and draw a light to how much our politics do not align with who we think we are.

"The key is greater devolution of power, and greater connections with communities because there is a massive gap between those making decisions, and those who the decisions impact on."

Ok Chlöe is part of the 2020 Loading Docs collection and can be viewed online via nzherald.co.nz/loadingdocs and www.loadingdocs.net