Green Party co-leader James Shaw said he was "still processing" the decision of 32 party delegates to reopen nominations for his job, potentially triggering a leadership spill.

This means Shaw is, for the moment, no longer co-leader of the Green Party. Marama Davidson, who managed to re-secure her co-leadership at the AGM, becomes the sole leader until the other position is filled.

Each year the Greens hold a vote to reconfirm their co-leaders for another year. Usually, those votes are uncontested, as this vote was. However if uncontested, delegates can vote to reopen nominations - essentially a no-confidence vote in the incumbent.

If votes to reopen nominations pass a 25 per cent threshold, a leadership process is triggered.

Nominations for the co-leader position are now reopened and will stay open for a week. Any Green Party member can put their name forward. Shaw indicated he was likely to run again.

If only one name is put forward after a week, that person will face another vote to either confirm them as co-leader or reopen nominations. If there is more than one candidate, a leadership vote must be held within a month of nominations closing.

Party delegates vote for the leadership, but they have to take the temperature of the members in their respective branches first.

Shaw said he was "inclined" to put his name forward, but would talk first to party members and caucus first. Caucus will meet on Tuesday.

"When I first stood as co-leader in 2015, I committed to the Green Party that I wanted to take them into Government and then safely out the other side. That job is only half done," Shaw said.

Shaw said he was particularly keen to talk to party members, who number in the thousands, as distinct from the hundred or so voting delegates, whether he should stand again.

Shaw and his backers believe he is still popular among the membership at large, and the faction who oppose him managed to out-organise his team to swing voting delegates to essentially depose him.

"I want to know that before putting my name forward."

Speaking to media after the vote, Shaw also appeared to lay the blame on poor turnout.
There were fewer delegates at this year's AGM than in previous years.

Shaw said that none of his caucus colleagues had so far put their names forward for the leadership. 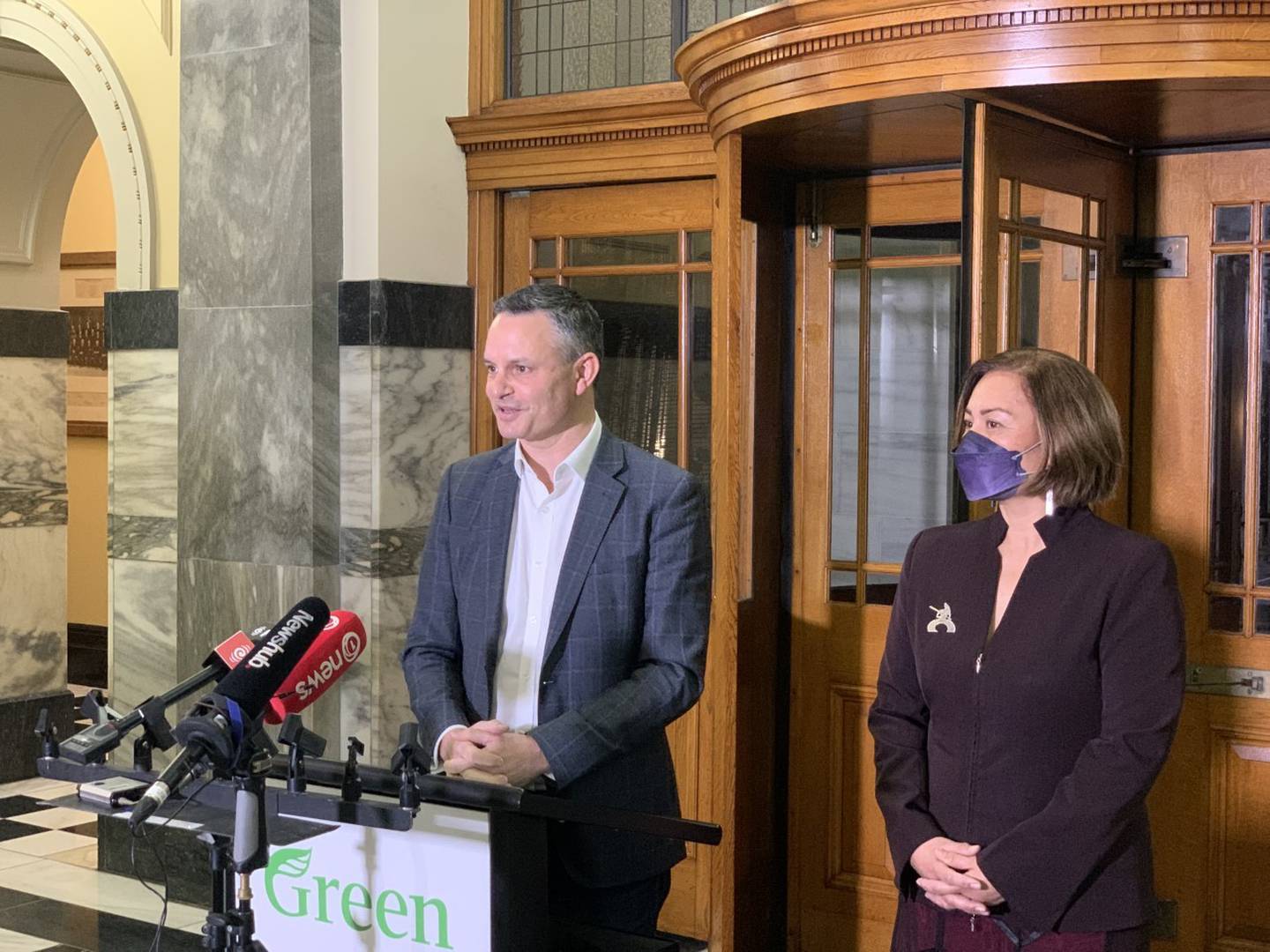 Auckland central MP Chlöe Swarbrick has been spoken of as a potential co-leader for years. She did not return the Herald's request for comment. Members of caucus are not speaking to media.

Davidson said her role as co-leader meant she could not explicitly back Shaw's leadership and re-election. She described the vote as a "shock".

"I feel saddened for my friend, as you would for anyone who loses their title and role. I also know that this is the Green Party process," Davidson said.

She said Shaw had "slugged his guts out behind the scenes".

Shaw is currently serving as Climate Change Minister in the Government. This afternoon he spoke to Prime Minister Jacinda Ardern who said he would stay on as a minister despite losing the co-leadership.

Simon Tapp, who was a delegate at the AGM, but spoke to the Herald in his capacity as a party member said he was "surprised" at the vote.

Tapp added he was "pretty confident James' support will increase to well above 75 per cent".

"Greens will take time to reflect on what James has done in Parliament for people and planet," Tapp said.

Tapp said the feeling among members he knew echoed Shaw's remarks to the media and that support among the membership was stronger than among delegates.

"That appears to be what has happened here," Tapp said.

However, another delegate, who was instructed by their branch to reopen nominations, said the vote was a "call for renewal at the top".

"This unprecedented vote to reopen nominations is the culmination of growing member dissatisfaction with the current co-leadership - particularly on climate issues," the delegate said.

They said the "annual re-election of co-leaders is a core Green Party process. It allows members to make major decisions together on who they support, or if they want change.

"We are going into election year and we need to be able to differentiate. We need transformational leadership that can deliver on Green policy, and that the party can unite behind".