A 5.8 magnitude earthquake has struck near Wellington.

The quake has been felt as far north as Gisborne and near the bottom of the South Island, according to Geonet.

Geonet has revised the quake's depth to 37km, 30km northwest of Levin. Originally it said it was a 5.9 magnitude quake, and later revised that to 5.8.

Jacinda Ardern was live on television this morning when the earthquake struck.

"We're just having a bit of an earthquake here," said the PM to Newshub host Ryan Bridge as the screen began to shake.

"Quite a decent shake here," she continued as the Covid-themed backdrops quivered behind her.

A number of aftershocks have occurred in the area as well.

All are being categorised as "weak" earthquakes on the GeoNet website. The latest reported a 3.7 magnitude quake 30km north-west of Levin at a depth of 31km. All Metlink train services are being held at stations following the quake. At 8.30am it said train services remain suspended across the rail network and to expect significant delays.

"During this time we are trying to source buses however please be advised that bus replacements will be limited," Metlink said.

"Limited bus replacements along the Hutt Valley and Kapiti Line," Metlink tweeted. "We advise to use alternative transport."

Train services are currently suspended across the rail network while we inspect the tracks due to the recent eart... https://t.co/KftxSdCqJU

Wellingtonian Mike Cagney had just pulled up to an intersection near the Wellington railway station when he thought "Why the hell is my car rocking?"

He initially thought there was something wrong with his car or it was being buffeted by wind.

"It was jumping quite strongly and it was like holy cow - it was only later I realised it was an earthquake," he said.

National MP Amy Adams was in a meeting at Parliament when it started to shake - causing all five people in the room to get under the table.

"We sort of all looked at each other and then everyone was getting under the table."

She did not expect it to last as long as it did - about 30 seconds, she guessed.

We hope everyone is feeling ok after the shaky start to the week - a 5.8 earthquake near levin. No threat of tsunami to New Zealand. Have a safe week everyone.

"It was a decent length and it certainly rolled around."

No one was hurt, she said, and nothing in the room had fallen.

Asked whether new National Party leader Todd Muller was in the meeting at the time, she said no.

Adams said being from Christchurch, she had experienced and lived through "thousands" of earthquakes and dubbed that one "pretty strong."

That was a nasty jolt for Wellington and Levin area. Hope everyone’s ok #eqnz

It was longer than most - in the past, earthquakes are short and sometimes sharp. But this morning's lasted a lot longer than normal, the Herald's Jason Walls says.

It happened when many commuters were coming into work, navigating already wet Wellington roads.

Fire and Emergency NZ has not received any quake-related calls. A police spokesperson said no reports of major damage had been received, but officers are making enquiries around the lower North Island to assess any damage to property.

Horowhenua Mayor Bernie Wanden said council staff and emergency services were looking around Levin and the wider district for any signs of damage.

"So far, none to report of any significance, and in most situations it's been business as usual already which is great to hear."

"It was a very jittery quake and it got a bit stronger but I was very impressed the kids automatically went under the breakfast table."

He said it was the strongest earthquake he has felt since the Kaikoura earthquake in 2016.

McDouall said he had heard of no reports of damage so far in the Whanganui district.

"It's a good reminder that we live on fairly seismic active land and we just have to make sure we have enough water for three or four days and the things that can fall over are tied back."

Newstalk ZB's Scarlett Cvitanovich said it was felt in Whanganui and shook for around 30 seconds.

"This was the first significant earthquake I've felt since Christchurch and its many aftershocks. It arrived with a loud rumble in Whanganui and shook the house steadily for around 30 seconds," Cvitanovich said.

"It was long and rolling with a few sudden lurches but didn't lose its intensity."

Cvitanovich said she stood in the doorway with her parents as photographs started moving, some falling to the ground.

"You could hear house alarms starting straight away and sirens around the town."

Manawatū Guardian editor Merania Karauria, also in Whanganui, said it was "my first strong earthquake which seemed to go on forever. I am in an upstairs apartment and the shaking was scary. My cat ran to my bedroom. Being upstairs I was unsure where to stand. Items moved and I've moved bigger pieces onto the floor."

The Herald's Belinda Feek said it could be felt in New Plymouth quite strongly.

She said it was still shaking slightly after about 30 seconds.

Rangitikei mayor Andy Watson said he hadn't received any reports of damage "as yet" due to the 5.8 magnitude earthquake.

"They will come in though, it was enough of a roll to cause some damage.

"When it struck, I thought 'uh oh, I hope this isn't Christchurch', because that would have been huge." 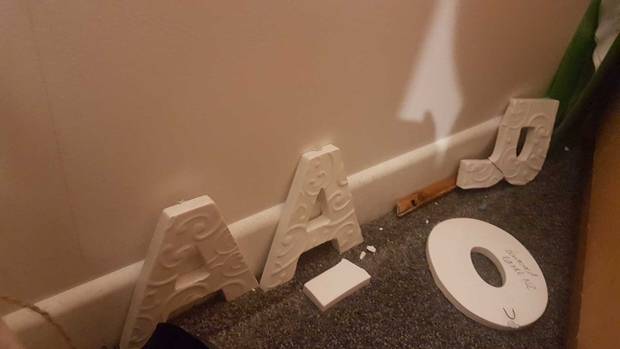 In Kapiti, the quake was felt strongly. Rosalie Willis said "pictures fell off my walls" and said the shaking lasted about 10 seconds - with "a rumbling" continuing for a lot longer.

Kapiti News editor David Haxton, his wife and two kids quickly gathered together in the middle of their Raumati Beach house as the shaking gripped the house.

"The cat bolted, thankfully there was no damage or worse, but it certainly raised the heart rate of everyone," he said.