Prime Minister Jacinda Ardern says she won't be visiting Ihumātao this week amid promises of a march on her office if she doesn't.

But she may be meeting with some of those involved in the ongoing dispute, and discussing it with the Māori King on Tuesday.

Ardern has repeatedly refused an invite from those occupying the South Auckland land.

The protesters - who are trying to stop a housing development - have launched a petition, saying they'll march to deliver it to the Prime Minister's Mount Albert office on Thursday if she hasn't come around by then.

On Monday, Ardern told reporters she had no plans to visit this week.

"Visiting doesn't get us closer to a resolution. It ultimately needs to come from mana whenua. I haven't ruled out visiting in the future, but right now I see it as a distraction to finding a resolution," she said.

"At the moment I am here in Wellington [on Thursday]. I have no current intention to visit this week."

But Ardern will on Tuesday be visiting Tūrangawaewae Marae in Ngāruawāhia for King Tuheitia's annual coronation commemorations, Koroneihana. 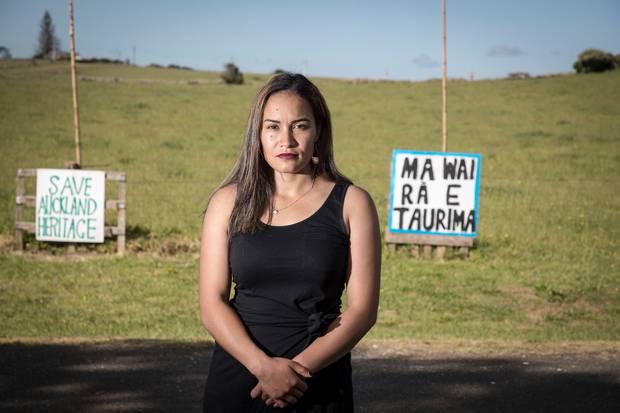 Ihumatao occupation leader Pania Newton says no one from her group will be at Tūrangawaewae when the Prime Minister attends. (Photo / Michael Craig)

The King has offered to act as an intermediary in the stalemate between Ihumātao's iwi authority – which supports a planned development by Fletcher Building – and those opposing it, led by Pania Newton and the Save Our Unique Landscape group.

Ardern has a private meeting scheduled with King Tuheitia and it's expected Ihumātao will be raised.

"Obviously Kīngitanga is at the centre of trying to develop a resolution to this situation and I'll be visiting so I have every expectation it'll be one of the many topics we will discuss," she said.

And she said she could also be talking to those involved in the dispute while at Tūrangawaewae.

"I've obviously met with members of mana whenua already over the issue and if that happens over the course of my visit, then that's not unexpected," Ardern said.

That doesn't appear to include the protest leaders.

Newton was in Tūrangawaewae on Sunday to perform for the King as part of a kapa haka group, but told the Herald she had returned to Ihumātao since and that no one from her group would be at the marae during the Prime Minister's visit.

She said she was disappointment by Ardern's refusal to visit Ihumātao.

"She should come and experience the same significance we experience every day … and see the whenua and enjoy its beauty," Newton said.

"It's just an invitation."

The group still plans to march on Ardern's electoral office on Thursday.

Ihumātao is thought to be one of the earliest places settled in Auckland and those occupying the land say the site is of historical and cultural significance.

They were issued with an eviction noted on July 23 and Ardern announced a halt to the development three days later, as tensions escalated.

Ardern will be joined by Government Ministers Shane Jones and Nanaia Mahuta at Tūrangawaewae.

For the second year in a row, media have been prohibited from taking photos or filming at the marae.