The gigantic carbon sink below New Zealand that is the Southern Ocean might come to quicken the effects of climate change, due to a worrying feedback loop just identified by scientists.

The vast and wild ocean current sucks up more than 40 per cent of the carbon dioxide we produce, acting as a temporary climate-change buffer by slowing down the accumulation of greenhouse gases in our atmosphere.

Yet the same westerly winds that play a critical role in regulating its storing capacity are now threatening its future as a CO2 bank, by bringing deep carbon-rich waters up to the surface.

Many climate models predict that the westerly winds overlying the ocean would get stronger if atmospheric greenhouse gas concentrations continued to risk.

A new international study suggests that in the past, strong westerlies have been linked to higher levels of atmospheric CO2 due to their impact on the Southern Ocean carbon balance.

That meant stronger westerlies could actually speed up climate change if mankind continued to emit as much CO2 as it does today.

A team led by Australian Nuclear Science and Technology Organisation scientist Dr Krystyna Saunders travelled to remote and subantarctic Macquarie Island, about 1,100km south of Bluff, to reconstruct the behaviour of the Southern Hemisphere westerly winds over the past millennia.

"This is an exciting finding," Saunders said. 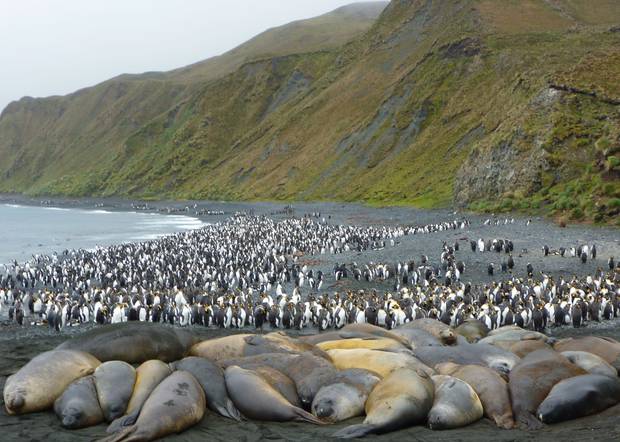 "Our new records of the Southern Hemisphere westerly winds suggest there have been large changes in wind intensity over the past 12,000 years.

"This is in marked contrast to climate model simulations that predict only relatively small wind speed changes over the same period."

Travelling to Macquarie Island, which sat at a latitude where the winds were strongest, allowed the research team to get a clearer picture of the westerlies' behaviour.

To reconstruct the changes, the researchers used radioisotope dating methods to analyse ancient samples of accumulated sea spray and wind-blown minerals, which acted as tell-tale markers of wind strength over long periods.

By comparing their reconstructed wind intensity data with other climate records, the researchers found that periods of intense wind strength were matched by marked increases in atmospheric carbon dioxide and temperature, as well as declines in sea ice levels.

"The connection between strong and persistent westerlies and rises in carbon dioxide at the beginning of our current warm interglacial period, about 12,000 years ago, and again from about 7,000 years ago, suggests that the winds have determined whether the Southern Ocean acts as a net sink or source of carbon dioxide at different times in the past," Saunders said.

"Therefore, over a period of decades to millennia, further increases in wind strength will lead to faster accumulation of carbon dioxide in our atmosphere."

Dr Sara Mikaloff-Fletcher, an atmosphere and ocean scientist at Niwa who wasn't part of the study, said recent trends in the Southern Ocean carbon sink had been mysterious.

Several lines of evidence suggested that the Southern Ocean carbon uptake was weaker than expected from atmospheric CO2 changes during the 1990s. 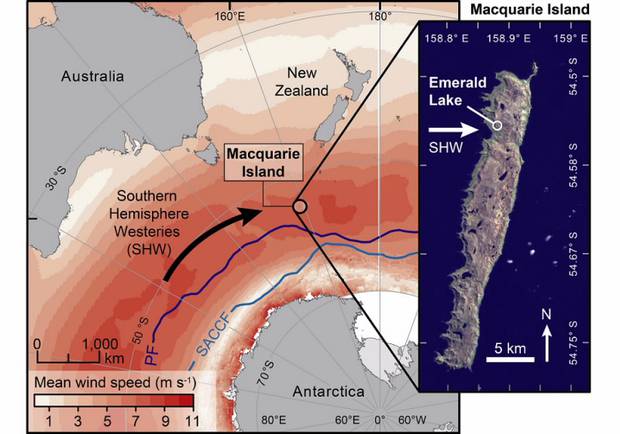 This weaker carbon sink been attributed to increasing westerly winds - essentially through the same mechanism described in the new study.

Yet, Mikaloff-Fletcher added, sea surface carbon data suggested that there was a reversal of this trend in the early 2000s, when the Southern Ocean began taking up carbon much more quickly, even though the westerlies didn't slow.

"The mechanisms behind this change still aren't fully explained, which makes it hard to predict whether this is a short-term effect or a long-term one," she said.

"The Macquarie study suggests that the sudden increase in Southern Ocean carbon uptake may not persist on longer timescales."

The new study follows a recent Niwa-led stocktake that found climate change was slowly shifting the chemistry of New Zealand's oceans, threatening the multitude of life found in our waters.

Ocean acidification, measured by a reduction in sea water pH, was mostly driven by oceans absorbing and storing increasing levels of CO2 in the atmosphere, which had now passed the symbolic threshold of 400 parts per million.

Between 1909 and 2009, New Zealand's sea-surface temperatures had warmed by a statistically significant 0.71C, while pH levels of subantarctic waters had dropped by 0.0015 units per year since 1998.

While that might not sound much, a decrease of one pH unit represented a 10-fold increase in the acidity.

The decline in pH was projected to continue in line with the increase in atmospheric CO2, leading to the most rapid decrease in ocean pH in the past 50 million years.

The effect was associated with decreases in nutrients such as nitrate and phosphate in the surface ocean, where most marine organisms live.

Even small shifts had big consequences: mussels and paua might struggle to build their carbonate shells, while some fish species could experience changes in behaviour, physiology and even habitat distribution.

Niwa scientists estimated that perhaps 25 per cent or less of the existing cold water coral locations around New Zealand would be able to sustain their growth by 2100 due to ocean acidification.