Holidaymakers spending time in the Coromandel over the long weekend are being told to hunker down and not to leave until the worst of the bad weather set to batter the region eases.

Thames Coromandel District Council is bracing itself for flooding, slips, gale force winds, power outages and further road closures in the next 24 hours.

Its emergency operations centre has been activated as civil defence and emergency services prepare for the massive storm to cause havoc.

MetService has issued a heavy rain warning in place for the Coromandel Peninsula from 1pm today until 6pm tomorrow.

FINAL UPDATE 9:20AM
SH25 is now OPEN between Hikuai and Whitianga. Please continue to drive cautiously and according to wet weather conditions. Thank you for your continued patience, have a nice day. ^APhttps://t.co/m5PB0lxcSp

Between 120 and 160mm of rain is expected to accumulate during that period.

The Coromandel is expected to be the hardest-hit region, despite heavy rain and strong winds expected to hit most of the upper North Island today.

A heavy rain watch is in place for Auckland, Gisborne and for parts of Bay of Plenty, while gale easterlies are likely to hit Northland, Auckland, Coromandel Peninsula and northern Waikato.

Thames District Council civil defence controller Garry Towler said the worst of the storm was expected to hit the region overnight and warned people to get prepared.

"Secure outdoor furniture, check gutters and drains in your neighbourhood, check that your neighbours are okay, set up gas appliances and torches in case power goes out, charge phones and then just hunker down. It will be over by mid afternoon on Monday."

He also urged all travellers, especially motor home travellers, to stay put and not attempt to get off the Coromandel until the bad weather passed.

Gale-force winds would make driving tricky in wind gusts in excess of 100km/h and could blow over motor homes, as well as caravans and trucks, he warned.

"We have been safe with Covid-19, let's be safe with this one as well, it will pack a punch," Towler said.

Meanwhile, SH25 between Hikuai and Whitianga has re-opened after heavy rain overnight caused flooding and slips, closing the road for several hours this morning. 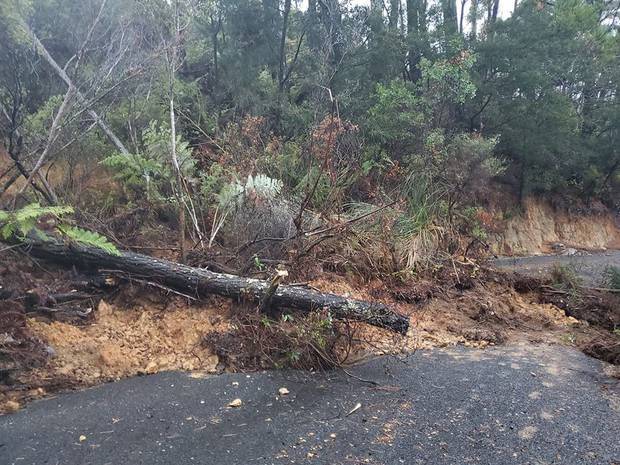