An Auckland businessman has been jailed for what has been described as "unprecedented large-scale tax evasion" after he and his company avoided $18.73 million in state payments by smuggling nearly 20 million cigarettes into New Zealand.

The man and the furniture firm, both of which have interim suppression, were sentenced today in the Auckland District Court by Judge Tony Fitzgerald after earlier pleading to dozens of charges for defrauding the revenue of Customs and making erroneous or defective importation entries.

The man was arrested at Auckland Airport in 2018 after a six-month Customs investigation, code-named Operation Whitethorn, began following a tip-off about a company suspected of smuggling cigarettes inside sea containers.

Customs' investigation included the use of surveillance of the man, CCTV footage, importation interceptions, executing search warrants, and examining Trade Me sales.

Investigators found the man's Auckland storage facilities contained metal office cabinets, which had been used to hide the illegal cigarettes. Customs records show that between August 2015 and December 2018 the company imported 133 containers from China which were said to be importing furniture, but with no mention of any smokes.

However, handwritten notes discovered during searches, the court heard, recorded the quantity and brand of cigarettes sought from China. Millions of dollars in cash was also found in some of the storage containers and in black rubbish bags.

Dow said the man wasn't just causing a significant loss to the state, but had also made about $7m for himself during the offending over a three-and-a-half year period. 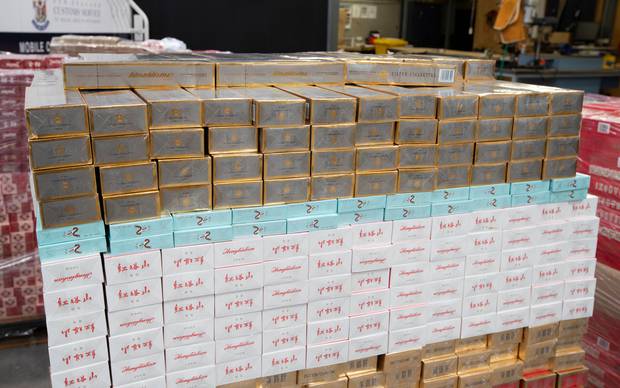 A businessman and his company smuggled millions of smokes into New Zealand inside steel cabinets. (Photo / Brett Phibbs)

Customs had estimated as many as 28.56 million cigarettes may have been smuggled into the country, evading some $25.36m in tax. However, after a disputed facts hearing, Judge Fitzgerald today ruled the quantum was some 19.41 million cigarettes and about $18.73m in avoided tax.

The judge said the illegal importation was "well-planned sophisticated offending" which had never before been seen in New Zealand.

The guilty man and his company, represented by David Jones QC, sourced the cigarettes and found people and outlets in New Zealand to on-sell the smokes "on a massive scale", Judge Fitzgerald said.

"It was enormous, well-planned, sophisticated offending driven by greed," he continued, adding it must be considered one of the most serious cases of dishonesty offending in the country.

The businessman was sentenced to a total of five years and three months' imprisonment by Judge Fitzgerald, while his company was fined.

A third party, a woman with interim name suppression, was also charged as part of Operation Whitehorn and remains before the court.

Suppression for all three parties will continue until the conclusion of the woman's case, the court ordered.