Vodafone has had its share of regulatory grief. It was the Commerce Commission's decision to block the proposed Vodafone NZ-Sky TV merger that led to the "Plan B" to list on the NZX, which in turn sparked trade sale interest.

But in the case of the deal put on the table today, it's much harder to make the case that it would substantially lessen competition - the key test under the Commerce Act.

At first blush, Wigley can only see one possible fly in the ointment.Although Infratil is largely invested in transport, airports and other infrastructure areas outside tech, it does own a 51 per cent stake in Trustpower - which in recent years has built a five per cent share of the retail broadband market by bundling internet with its power plans.

However, Trustpower's broadband market share is substantial enough to draw the attention of the ComCom. 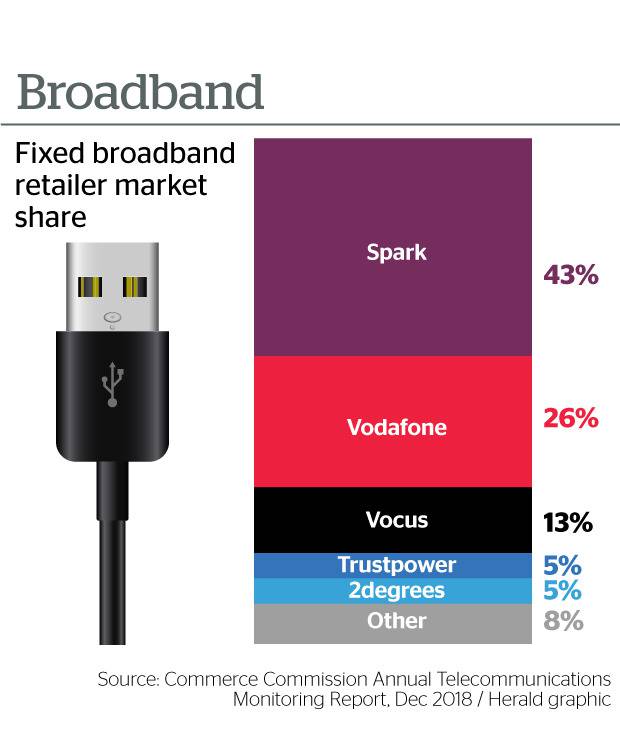 Nevertheless, he says it's possible that Intratil and Brookfield will apply for clearance from the regulator anyway, to ensure there are no legal snags down the road.

But even if the clearance process begins to look tricky, due to the Trustpower issue, Intratil could probably still get the greenlight by divesting its stake in the power company, Wigley says.

The sale would be complicated by the fact Spark, 2degrees and Vocus would probably all be vetoed as buyers by the ComCom, Wigley says, as combining Trustpower's broadband business with their own could be seen by the regulator as lessening competition.

The deal will also require Overseas Investment Office approval due to Brookfield's involvement. But unlike the ComCom, the OIO has a recent history of greenlighting major deals.

Telecommunications Users Association of NZ (Tuanz) head Craig Young welcomed the deal, despite qualms from some on social media who fretted the $1.4 billion debt load Vodafone NZ would take on would push up prices.

"It's good to see a New Zealand company investing in Vodafone NZ as a critical player in our communications market," Young told the Herald this morning.

"We will though be watching what impact the financing structure, along with the new owners has, on customer service and pricing as they will be looking to ensure a return on their investment."

On a conference call, Infratil boss Marko Bogoievski and Vodafone NZ boss Jason Paris both said the locally-owned operation would have more freedom of movement.

"They [Vodafone] do put some constraints on their local subsidiaries," Bogoievski said.

Paris named fixed-wireless broadband - a hit market for Spark - as one area he would like to expand into more aggressively.

He said he would now be able to expand his planning horizon from 12 months to three to five years.

Bogoievski said Vodafone NZ's management had faced major distractions in the past couple of years from the attempted Sky TV merger, then IPO.

Now "all that stuff can be put away. We're going to be long-term owners of the business," he said.

The deal will include the right for Intratil and Brookfield to use the Vodafone brand, and access Vodafone technology and preferential roaming rates.

Bogoievski said the Vodafone Group services were not included in the sale price. They would be offered to Vodafone NZ at a "fair" commercial rate.

Paris said, "We've gone into a lolly shop and grabbed all the lollies we loved and left the ones we don't."