Police have moved in en masse to Waiheke Island's Pūtiki Bay this morning, removing protester tents and equipment on a pontoon and taking two people away in a boat.

"Send your aroha to Pūtiki," said one protester, live-streaming the events from the foreshore and estimating around 50 officers were at the site.

This is day 129 of the protest at Kennedy Point in an attempt to stop construction of a 186-berth marina.

A protester has stopped construction of the new marina since Saturday by climbing high up on one of New Zealand's biggest maritime jackup barges.

A spokesperson for Kennedy Point Marina said work had been stopped for the last few days because a protester was high up on equipment on the site.

Heron Construction won the contract for the 186-berth marina and has anchored in the bay its massive orange and yellow demountable jackup barge Tuhura with an excavator on top. A male protester entered the 18m by 9.9m steel hydraulic barge on Saturday and has been there since, a Heron spokesman said yesterday. The barge is a drilling rig to enable piles to be driven into the seabed for the new marina.

"The protester Warren Matehaere is still on our barge. We can't do anything until the protester leaves or is removed," a Heron Construction spokesman said today.

Emily Weiss live-streamed last night, filming him on the barge and showing how a rope was strung across to him so he could receive goods.

"Earlier this morning a huge police presence arrived to take away two kaitiaki on the seventh day of our moana occupation," one protester said on Insta today.

This is the 129th day Protect Pūtiki members have been at the site, attempting to get Government ministers and Auckland Council to take notice of their attempts to stop the construction of the marina with floating carpark, storage, laundry and cafe.

Some time ago, one protester stripped naked to try to stop construction workers tying cables and video shows that altercation at Kennedy Point.

Protect Pūtiki wants Auckland Council and Government ministers "to mandate a process that will enable all affected parties to come up with an outcome everyone can live with".

But Kennedy Point Boatharbour's Kitt Littlejohn says the company has a valid resource consent and should be allowed to proceed to build what it is legally allowed to.

The site has been one of confrontations lately between protesters, security guards and construction workers.

Recently, two Kennedy Point Marina workers and around five members of Protect Pūtiki were in a confrontation with each other. A protester in a wet suit grabbed one worker's top and two protesters filmed the exchanges.

Another protester in a yellow kayak splashed water up into the workers' faces with a paddle.

Both workers were standing in thigh-high water, tying a cable when a woman wearing a long red coat climbs down from the rocks above. 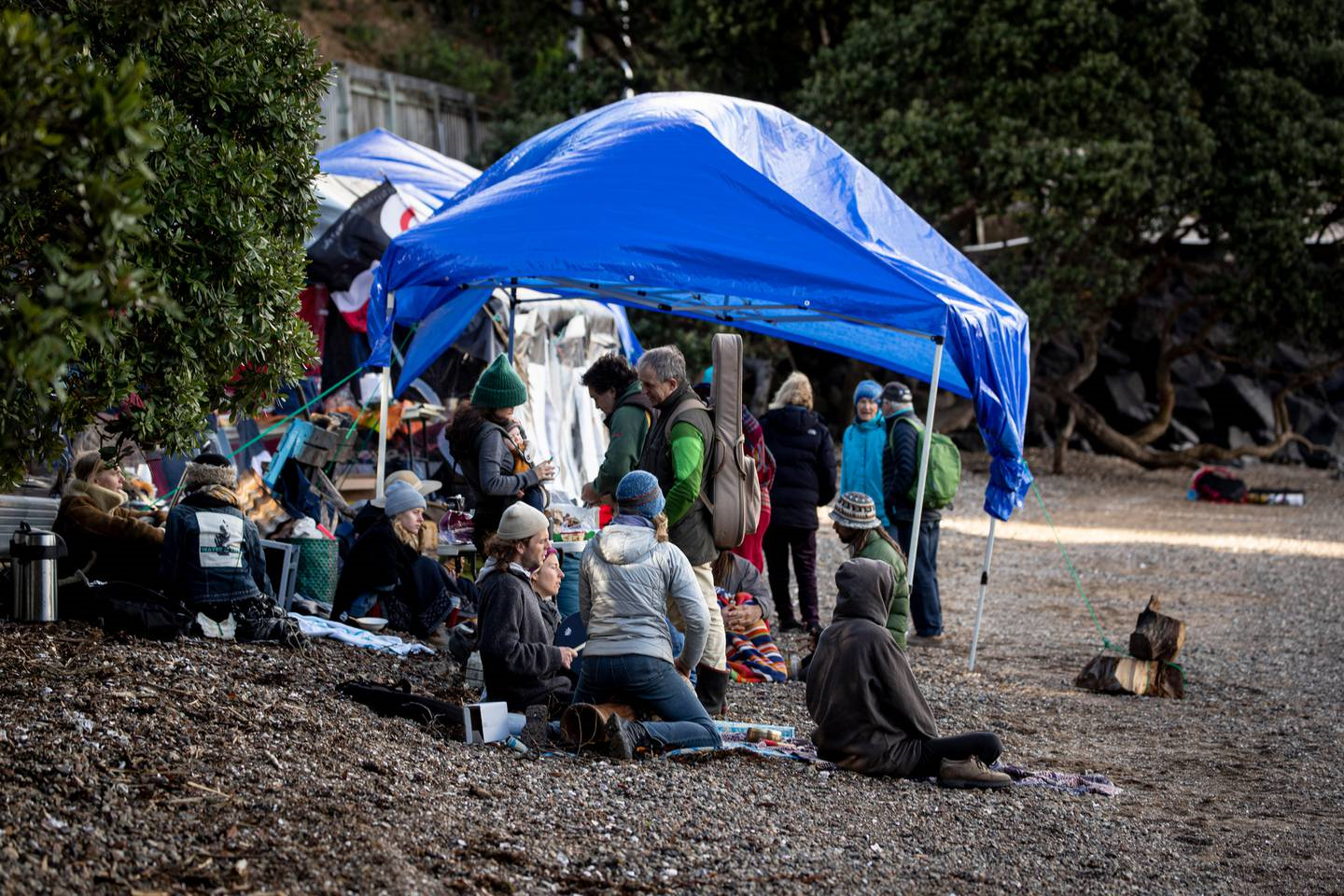 Protesters at the site on Friday. (Photo / Dean Purcell)

That woman with a bandaged right arm takes off two tops, unzips and removes her skirt and bra, flinging them behind onto the rocks.

She is then naked.

She leans on both workers' shoulders to balance herself to step off the rocks and down into the water, squeezing her body into the narrow gap between the two workers, semi-embracing one of them and looking him in the face.

He turns away quickly while attempting to carry on working with the cable.

The naked woman then moves her attention to the second worker. She tips off his cap and sunglasses. These are thrown into the water when the video suddenly ends.

The person who filmed the altercation said it showed the lengths anti-marina protesters were going to, after footage of violence at Kennedy Point emerged in the last week, with a protester and a guard being kicked in the face and head.

"The workers, both from Kennedy Point Boat Harbour, were attempting to connect a wire cable together when a protester decided to get naked," the person who supplied today's video said. "I have other videos of a female protester swimming out to our barge topless, climbing on board the barge and when she was prevented from gaining further access to our barge. She also stripped naked and can be seen backing up into our employees.

"Now when she sees one of the guys who stopped her from walking around the barge she - while recording on her phone - screams at the top of her voice 'there is the guy that sexually assaulted me'," the person said.

"This has been a far from peaceful protest as the protesters would have the rest of the country believe," he said.

But Emily Weiss of Protect Pūtiki says protesters have endured violence on the site, particularly the women. 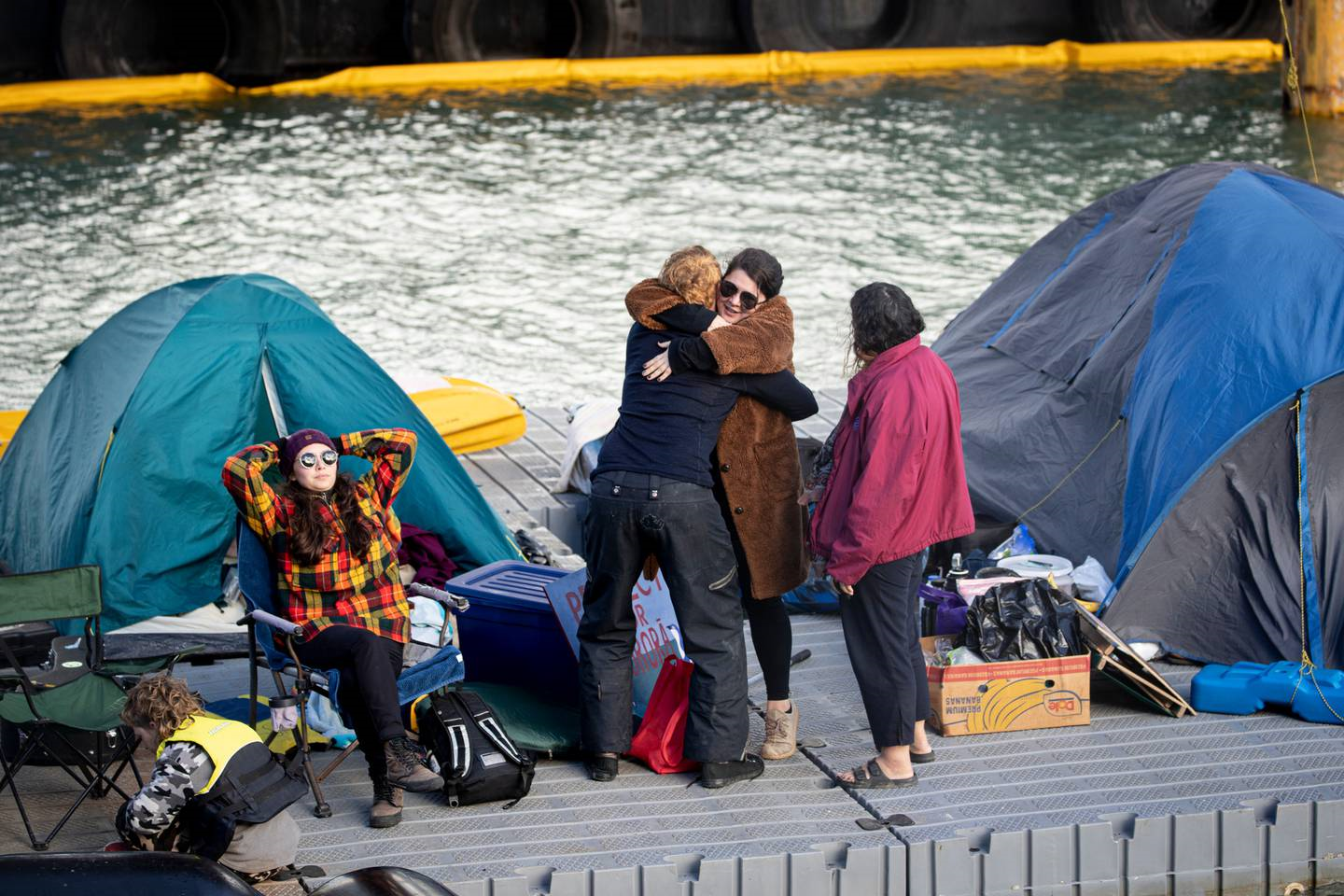 "We, Uri o Ngāti Pāoa, are currently occupying the beach at Pūtiki Bay (Kennedy Point), Waiheke Island. We are occupying to protect our ancestral moana, Tikapa Moana, by stopping the proposed 'Kennedy Point Marina'. Many Uri o Ngāti Pāoa (descendants of our iwi) have returned to Waiheke to occupy and have been here since March 9. We are committed to staying indefinitely," the group says. Protester on the equipment all yesterday and today. (Photo / supplied)

An island bach owner, Tracy Taylor, said the protesters were predominantly women and she defended their actions at the site.

"They have been subjected to physical assaults by marina contractors and security, these men are intimidating and have shown they will resort of violence. They have tackled women on the rocks, they have driven their boats into and over swimmers protesting in the water, they have hauled protesters out of kayaks," Taylor said today.

"The footage provided to the Herald by [Kennedy Point Boatharbour director] Kitt Littlejohn shows a woman protester fending off a male security guard who has been using a kayak paddle, taken off a kayaker, as a threatening weapon to intimidate the protesters.

"That was an unarmed woman versus a threatening man with a paddle. Can you imagine how scared those women are feeling when they come up against these men? She was fighting to get away from him and stop him pursuing her," Taylor said.

"What happened on the pontoon was the culmination of an aggressive series of acts by security guards," she said.