The cost of Auckland's City Rail Link project has soared by more than $1 billion.

The new cost "envelope" of $4.419b has been unveiled today along with the announcement of the successful bidder to build the bulk of the 3.4km underground railway, which will run from Britomart Station to Mt Eden Station by 2024.

CRL Ltd's (CRLL) Chief Executive, Dr Sean Sweeney, said that after a rigorous and comprehensive review of project costs, a revised cost envelope had been submitted to the project's sponsors – the Crown and Auckland Council - for approval.

"The $1 billion cost increase on the previous $3.4 billion estimate made in 2014 reflects significant changes impacting the project in the past five years.

"No-one could have foreseen the competitive pressures that have occurred in the construction industry over the past few years and the impact that has on costs, particularly for a project the scale and complexity of the City Rail Link."

A decision was made last year to increase the scope of the project to accommodate longer, nine-car trains at stations.

Planning today for a city that would be much bigger in the future reinforced the benefits the City Rail Link City would deliver to the way people travel, work and live in Auckland, Dr Sweeney said.

"Other factors contributing to the revised cost envelope are higher escalation, or construction inflation costs, and an increase in the contingency risk allowance for any future unplanned events.

"Put together, they have all helped add costs to the project overall. Keeping a growing city moving is a serious challenge, but when we complete the City Rail Link it will double the number of Aucklanders within 30 minutes travel of the CBD."

The CRLL had asked that the additional $1b cost be split 50/50 between Auckland Council and the Government.

The project was critical to reducing congestion and ensuring people could move around the city, Goff said.

"The cost of the tunnels and underground stations, two of the biggest parts of the project, was determined by a competitive tender process. The increased cost estimate reflects the increase in demand and costs for major construction projects across Australasia.

"A significant part of the cost increase, some $250 million, reflects the need to future proof the tunnels and stations. We won't repeat the mistake of the Harbour Bridge which was built at half of the size it needed to be, and had to have major additions made to it within eight years.

"The additional cost to Council will not involve higher rates for Aucklanders and it will be met without breaching the debt to revenue limit on Council borrowing."

Goff said it was unfair for Aucklanders to meet half the cost of the CRL when no other part of the country had to do so.

"I've argued that case to Government. The Government has refused to revisit the deal saying that was what was agreed between the previous Auckland Council and National Government.

"However, Government has agreed to phase the timing of Council's contribution to enable it to work within the constraints of its budget."

The Downer consortium has won a contract to build the rest of the line from Wyndham St, where construction is well under way, to Mt Eden Station, including the tunnels, rail services and two new stations near Aotea Square and Karangahape Rd.

When completed in 2024, the new line will enable trains coming into the city from the south and west to loop through Britomart and back to the existing western line at Mt Eden, instead of going into Britomart and backing out the same way they came in as at present.

The loop will effectively double the capacity of trains serving the downtown area to 54,000 passengers an hour. 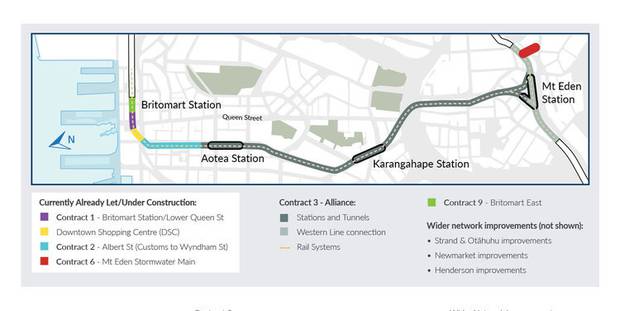 The line was already New Zealand's most expensive construction project on record even before the latest cost revision.

The Government and Auckland Council, which own the City Rail Link joint venture company, agreed in 2016 to split the costs of the project equally.

The Herald reported in January that the previous $3.4b cost was believed to have blown out by $500m, with "fears that it is going to be over $1b".

Costs have also increased because of a decision to lengthen platforms and create a second entrance to accommodate longer trains than originally planned at the proposed Karangahape Rd Station.

How the cost has risen