A young man was heard crying, "You killed my dad" after another man was fatally struck by a vehicle in a Māngere hit-and-run on Wednesday.

On the same street two men were also seen smashing a car as the driver fled into a nearby house.

Armed police swarmed on the Auckland suburb, cordoning off roads and questioning residents.

Police impounded this car, which they suspected was involved in the hit-and-run incident.

Up to 30 people were seen in handcuffs being spoken to by officers after the hit-and-run crash.

Police are yet to confirm arrests or charges.

A witness said he saw two men smashing a car on Thomas Rd.

A car had pulled out from a house and was revving its engine on the street, he said.

"I heard the tyre noises," the witness said.

Then two men began smashing the car with what the witness believed was a rock and iron rod.

The person inside the car fled into a house.

Meanwhile, around 30 minutes after that incident, he said police detained a young man.

As they were doing so, another young man was crying and yelling at the detained man: "You killed my dad."

Another witness said 20-30 people had been restrained across two scenes, while they were questioned amid a heavy police presence of about 15-20 officers.

Counties Manukau CIB's acting Detective Inspector Karen Bright said police received numerous reports about the incident just before midday, after a man had been hit by a vehicle.

"The vehicle involved fled the area immediately afterwards. Emergency services attended the scene but sadly the man died shortly after." 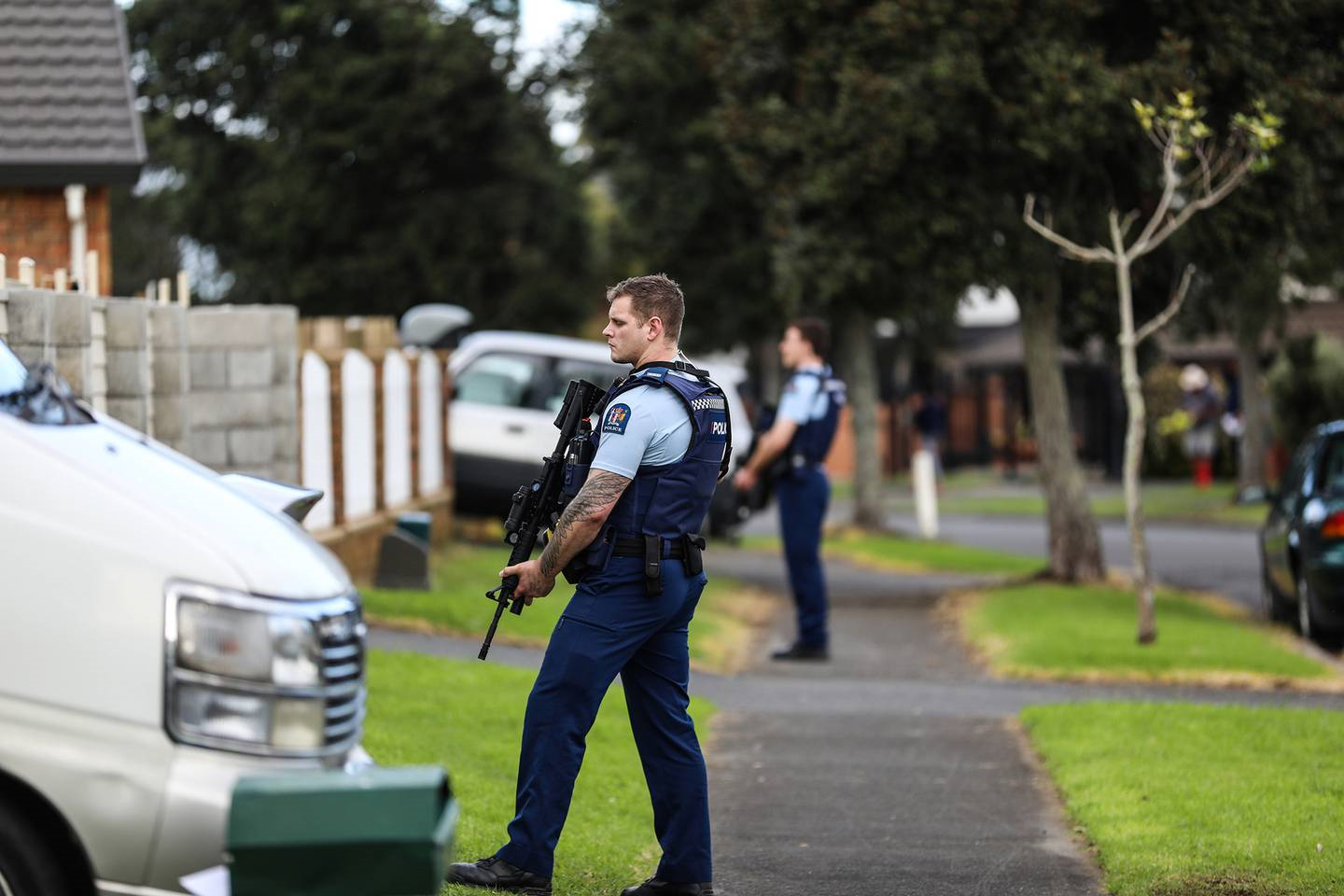 Armed police at the scene of the hit-and-run incident.

Early reports suggested a firearm may have been involved in the incident and as a precaution, armed staff responded to the area.

Police had not located a firearm.

"Police immediately made inquiries in the Māngere area following the incident," Bright said.

Police on Wednesday afternoon were at an address near the scene where they were speaking to numerous people. No arrests have been made.

"Our investigation is still in the early stage and detectives will now work to piece together the full set of circumstances of what has occurred." 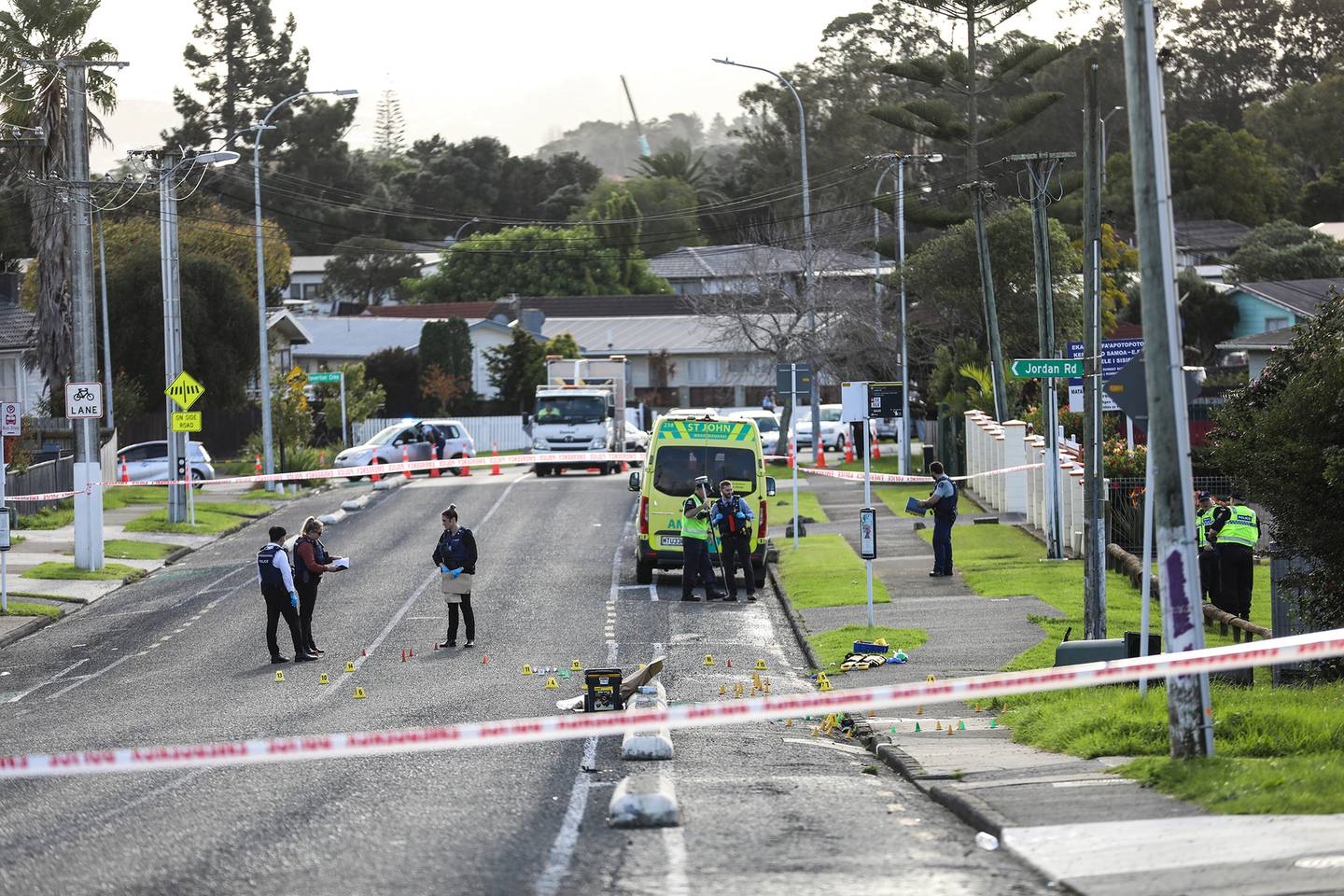 Police would like to hear from any witnesses to the incident or anyone who was on Thomas Rd at the time. They can contact police on 105 quoting the file number 210609/0607.

The incident, which occurred about 11.45am, forced nearby Thomas Rd and Jordan Rd to close.

The witness told the Herald armed police had also blocked an area of Pukaki Rd, which was about five minutes down Massey Rd from the scene of the suspected hit-and-run incident.

It is believed the hit-and-run took place on Thomas Rd while a separate incident occurred on Pukaki Rd.

About a dozen officers were on site at the Thomas Rd scene.

A vehicle with smashed out windows could be seen in a car park off Bader Drive.

A St John spokesperson said two ambulances were sent to the scene.

In an earlier statement, police said they were responding to an incident where a person had been hit by a vehicle and died at the scene.

The Serious Crash Unit was examining the scene and police were making inquiries into the vehicle involved.

"These inquiries are still in the early stages and a further update will be provided once available," said a police spokesperson.